By Kamila Zhumabayeva in Nation on 7 October 2016 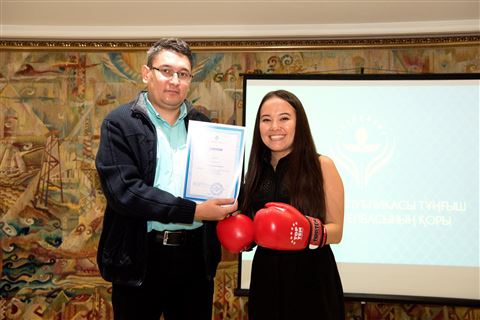 “Platforms such as Science Slam organised by the Foundation of the First President of Kazakhstan are very helpful for young scientists. I have been searching contests or projects where I could accurately convey my idea to peers, for similar science researchers for a long time. Then I came across Science Slam advertisement,” Asel Pazylbekova said, according to the press service of the foundation.

“I really liked it that the expert of the fund Roza Yedigeyeva was always helping and guiding when I reached out to her. She never rejected. I decided for myself that since organiser is so serious the contest will be decent too. And so it was,” Pazylbekova noted.

Created in Germany in 2006, Science Slam is a scientific talk where scientists present their research in 10 minutes to a non-expert audience. Results depend on audience judgement.

The show is becoming popular among Kazakh scientists and the Foundation of the First President organises this event for the second time now. Six participants from Astana, Almaty and Shymkent reached the final this year. Young scientists were talking about their research in fields of architecture, sociology, journalism, biology and management, the report said.

Although Pazylbekova handled well the task of translating complicated scientific terms to plain language, this was the hardest part for her. Having conquered both the audience and jury, Pazylbekova won a certificate for Project Management training and boxing gloves as a sign of victory over opponents.

According to the Foundation of First the President, Science Slam helps showcase what modern scientists are doing and provides opportunities to promote a scientist and his research developments.

“This event has already formed its own spirit and mood. … I really like that there is no officialdom here and a friendly atmosphere is created. A meeting of like-minded people was held today. Young researchers need to be tuned precisely this way. A solution to complex issues occurs in similar, in some cases even free surroundings. Such confidential atmosphere such as here is very important for developing scientific thought,” jury member and Professor Alexei Tsekhovoi said, presidentfoundation.kz wrote.