ASTANA – The capital’s School Children’s Palace offers a variety of activities from scientific to artistic to sports to help schoolchildren develop skills outside classrooms. 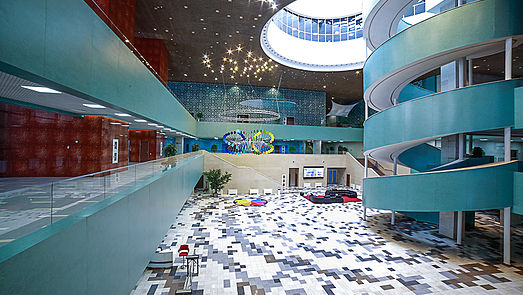 Kazakhstan’s State Educational and Development Programme for 2011-2020 stressed the important role of supplementary education for children as one of defining factors for developing aptitudes, abilities and interests of personal, social and professional forming of children and youth’s identity.

The capital’s School Children’s Palace aims to provide the young generation with a positive goal, means for achieving it and a surrounding for activities based on different interests. The palace was built in 2011 by initiative of President Nursultan Nazarbayev.

Today, nearly 10,000 children are involved in 125 clubs and sports at the palace. Doctors of sciences (a highest doctoral degree holders), candidates of sciences (equivalent to doctor of philosophy) are among about 175 teachers, including world champions and renowned artists.

“We have children succeeding no less than adults. Our choreographic ensemble obtained national title awarded by culture and education ministries. The ballroom dance ensemble are Europe’s champions, they recently went to Prague for a world championship, representing Kazakhstan,” deputy dead for training and educational work at Schoolchildren’s Palace Kymbat Irgebayeva shared in her interview with The Astana Times.

The palace hosts ballroom dance festivals, international contests and exhibitions. A technical arts championship will be held for the first time in October.

Irgebayeva notes children make their own research projects at the palace’s scientific clubs, such as chemist scientist club and the biotechnology centre that operate at the palace. A perfume made of herbs, soaps, creams was one of recent creations.

“Some sports are still evolving, for example, figure skating where one of our figure skaters was taken to the country’s national team,” she said.

According to Irgebayeva, tennis is in demand at the palace, however, swimming has the highest number of children involved. A lot of attention goes to developing technical arts at the palace.

An interactive park, a nuclear power centre and children’s theatre operate as part of the palace too. The children’s palace cooperates with many organisations and embassies, such as the Turkish, French and Indian embassies.

“We recently had Indian renowned dancer and teacher conducting a workshop here,” she noted.

Workshops were held with famous athletes like skater Denis Ten, boxer Serik Sapiyev and American actor, film producer, director and martial artist Steven Seagal who has visited the children’s palace over the years.

“Children were lucky that such an innovative facility like this palace was built,” Irgebayeva stressed. The palace works full days on weekends conducting classes on schedule, “children are all over the place,” the deputy director noted.

According to her, school children can obtain supplementary education in their spare time and a schedule is set for their convenience. They can come either during the first or second half of the day depending on time of their school classes.