ASTANA – The Palace of Peace and Harmony, a unique building symbolising the friendship, unity and accord of all the nationalities living in Kazakhstan, recently celebrated its 10th anniversary. Throughout the years, the building has taken a worthy place among the cultural attractions of the capital and because of its unusual design became known as the Pyramid. 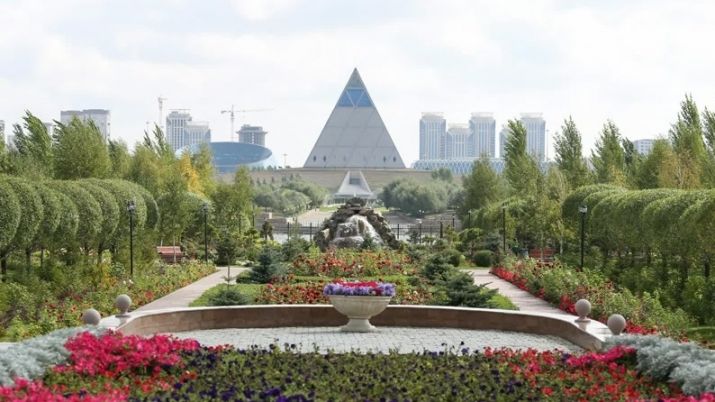 “In honour of the 10th anniversary, there was a celebratory gala concert which opened in the style of a spectacular musical by a dance and creative team of the Pyramid Dance Group. Also the festival included a programme that showed the construction and operation of the Palace of Peace and Harmony, an exclusive drum show and performances of troupes of amateur ethno-cultural associations of Belarus, Armenia, Uzbekistan and Ukraine. The headliner of the concert was the Russian band Pizza,” according to the press release of the palace.

The idea to ​​create the palace belongs to President Nursultan Nazarbayev, who voiced the proposal at the first Congress of Leaders of World and Traditional Religions in 2003. The second congress was hosted inside the pyramid and five such interfaith forums have been held there altogether which were attended by World Islamic League Secretary-General Sheikh Al-Turki, Russian Orthodox Church Patriarch Alexiy II, Chief Ashkenazi Rabbi of Israel, Yona Metzger and many other religious leaders, including from the Vatican. World famous opera star Montserrat Caballé performed at the palace’s opening ceremony.

The building contains a Turkic library with tens of thousands of books and manuscripts of well-known Turkologists and ethno-cultural associations such as the Assembly of the People of Kazakhstan, an international centre of cultures and religions and Kulanshi, a centre for contemporary art. The pyramid also houses the International Turkic Academy, which is engaged in coordinating and promoting scientific research on the history of the Turkic world from ancient times to the present and the study of Turkic language and literature.

The distinctive project was developed by famous British architect Lord Norman Foster. The tip of the pyramid is decorated with a work of art by painter Brian Clarke – a stained glass with images of 130 pigeons, symbolising the different nationalities living in Kazakhstan. The building has a movable frame, constructed to take the climate into account, as well as elevators moving diagonally rather than upwards with a slope of 60 degrees. Such lifts are also found in the Eiffel Tower and the Luxor Hotel in Las Vegas.