ASTANA – Veteran of the National Security Committee Abiltai Shaikhov recently completed a 1,200-kilometre bike trip from Almaty to Astana in honour of the 25th anniversary of Kazakhstan’s Independence. 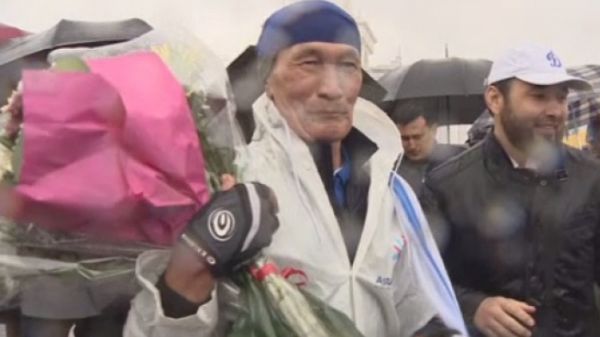 The 73-year-old pensioner began the journey Sept. 21 and ate traditional Kazakh foods to give him strength along the way, 24.kz reported.

“I was eating kurt and irimshik (Kazakh national dairy products) during my trip. I specifically took them with me. This is our Kazakh tradition. Kurt gives me strength and relieves thirst. Doctors had even prepared a first aid kit with medicines for me, but I did not use them. Kurt is the best source of calcium,” Shaikhov said, adding that he is glad he completed the distance.

The veteran said that he was warmly greeted in almost every major city by compatriots. In Astana, in spite of rain, Shaikhov was met and celebrated by dozens of people on the main square of the country, Khabar TV reported.

“I was very surprised. I really didn’t know that our people will be so kind on my way. I really did not expect that. Five colonels from different organisations met me in the Zhambyl region. They were on bikes too and they escorted me. We covered 200 kilometres together. They handled bikes better than me and had more experience in bike riding. The colonels taught me how to drive, how to sit and most importantly – how to rest correctly,” Shaikhov said.