ASTANA – “Zhambyl. Poet of the Great Steppe,” a book by Eurasian National University Rector Yerlan Sydykov, was presented Aug. 22 in Belgrade. A memorial honouring the famous Kazakh poet and akyn (folksinger) was presented two days later in the same city. 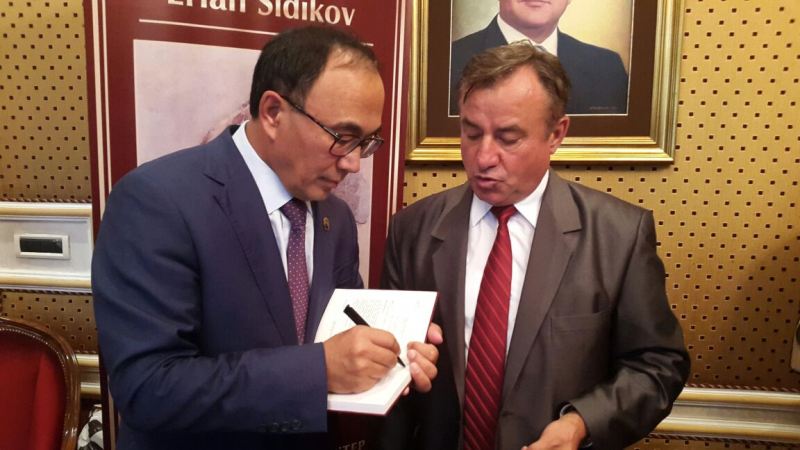 “Zhambyl. Poet of the Great Steppe” is the most complete biography of the poet, according to the university press service. It is divided into The Philosophy of the Steppe Battles, The Aesthetics of Poetic Stadia and The Creator in a Changed World. The work is dedicated to the 70th anniversary of the victory over fascism and the 170th anniversary of Zhambyl Zhabayev’s birth.

“I am not a writer; I did not have a goal to study and analyse the work of Zhambyl. As a historian, I wanted to show Kazakh society and its development as well as its dynamics, transformation and self-sufficiency through the life of Zhambyl. New talent similar to Zhambyl can appear in society in any time of history,” said Sydykov in an interview with Kazakh TV.

“There are passages in the book which give an idea about the direction of Zhambyl’s work. First of all, he wrote about people, about his life, about the war. He had been writing poems since an early age, literally from childhood. It would be interesting to translate his book of poems. That would be a very difficult task, but it would be much more interesting,” said Markovic, according to Kazakh TV.

The Zhambyl monument was unveiled during Nazarbayev’s first official visit to Serbia. Serbian President Tomislav Nikolić and Belgrade Mayor Siniša Mali also participated in the opening ceremony, which was attended by representatives of the Serbian Ministry of Culture and Information, Association of Writers of Serbia, Belgrade Society and diplomatic corps.

“Let today’s event serve as an incentive to ensure that the works of Kazakh poets and writers are translated into Serbian and vice versa. This way, we will bring our people together,” said Nazarbayev during the ceremony.

He also proposed organising Serbian Culture Days in Kazakhstan and Kazakh Culture Days in Serbia. He expressed confidence the events will be followed by the next steps in strengthening cultural and humanitarian ties between the countries.

Typically referred to as Zhambyl, Zhabayev is famous for his sincerity and simplicity of the epic narrative. He talked about the lives of ordinary people in his poems and songs and his work represents Kazakh literature of the Soviet period. Zhambyl died in 1945 at the age of 99.