By Kamila Zhumabayeva in People on 17 September 2016

ASTANA – Dom Druzhby, the new House of Friendship of the Assembly of the People of Kazakhstan of Zhambyl region in Taraz, will soon be decorated with an artistic creation. Zhambyl artist Kali Koralasbayev will be building the “Friendship Tree,” a sculptural composition symbolising unity and friendship among nations. 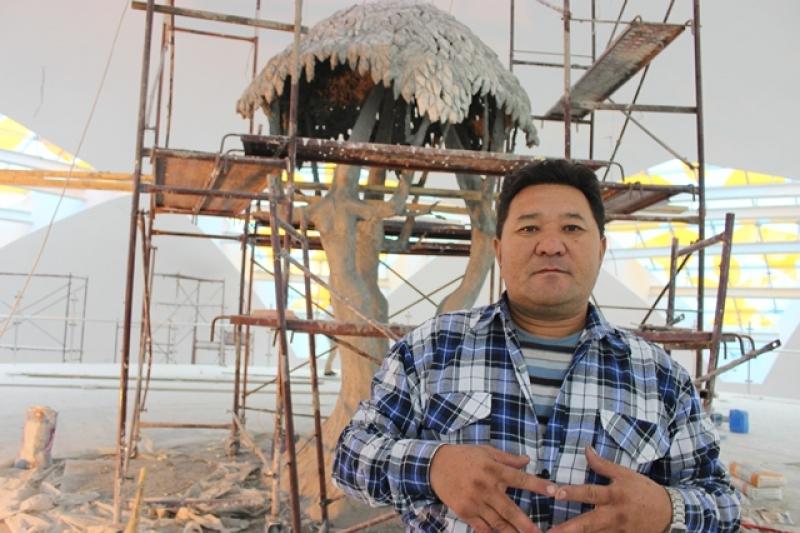 “I offered to present the styled Friendship Tree in a female character because a woman is a keeper of peace and accord in our world. Who is first wishing for peace, prosperity in life? Who is against war, poverty and devastation? Women! Men are always belligerents, conflicting. A woman bears a life inside of her, brings peace into the house. Women stopped nuclear madness with a wave of their white scarves (the ‘Nevada-Semipalatinsk’ movement),” Koralasbayev told Kazinform.

A multifaceted master from the Shu district, Koralasbaev is known as an artist, sculptor, caricaturist and graphic artist whose paintings are displayed in museums and private collections around the world. His first personal exhibition was held in 1987 in the district Culture House of his native Tole bi village, followed by exhibitions in Zhambyl regional exhibition hall and Kasteyev State Museum of Arts and Central State Museum of Kazakhstan.

Construction of the new House of Friendship began in April 2015 at Drevniy Taraz (“Ancient Taraz”) historic and cultural complex. The Friendship Tree is currently being built on the second floor under the building’s dome. The exhibition ring, an area framed by colorful glass windows, provides space for expositions by the region’s ethno-cultural associations, noted inform.kz.

The sculptural composition presents itself as three trees in the form of three women, a symbol of sustainability and stability in Oriental philosophy, said Koralasbayev. Above them is a handkerchief as a crown topped by a swallow’s nest as a symbol of peace.

“Nothing refers to some sort of national affiliation here. I deliberately did it in the way that no faces or some national ornaments can be seen. All of us are united under a single shanyrak, beneath a single dome of peace and concord and any nation can see itself here. Because all nations, women of every nation wish for one thing – peace throughout the world. After all, Earth is our common home,” he said, according to the news agency.