By Kamila Zhumabayeva in Culture on 15 September 2016 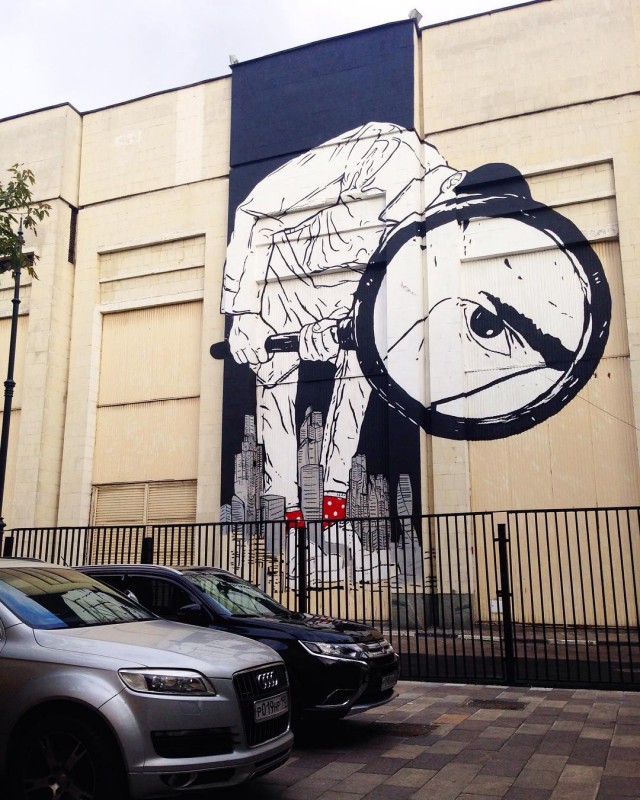 “We hope that this drawing, not far from Arbat, will become a peculiar cult spot,” said press secretary of Moscow high-voltage networks Olga Ashmarina, according to RusCable.ru.

“The substation itself is a facility with strict safety precautions, but the artists plotted their 17 metre drawing in a way that makes it comfortable to take pictures – and it is interesting exactly outside a protected area. There is a site in front of the drawing that, when getting on it, puts one visually under a magnifying glass,” the report said.

According to the artists, the drawing at the substation symbolises attention to personality and individuality, preserved despite the crowded metropolitan environment.

The painters worked for free and completed the piece in one day. The substation was painted as part of Moscow’s international biennale of street art, “Artmossphere.” The official premiere of the artists’ new work was Sept. 13.

Both artists are known for their social focus. The two previously created the portrait of the early Soviet-era surrealist, absurdist poet, writer and dramatist Daniil Kharms in St. Petersburg, RusCable.ru notes.

Almaty artist Cas is also known for the “This Is Silence” manifesto. He painted Edvard Munch’s picture “The Scream” on one of facilities of the Semipalatinsk nuclear test site.

Cas and his colleagues also recreated French artist Henri Matisse’s “Dance.” In their version, people dance in a circle around a fuming pipe on a building in Temirtau, expressing a protest against environmental pollution. The local city administration (akimat) saw their action as a breach of the rules of public services improvement.

Artmossphere began Aug. 30 and will run until Jan. 10 of next year. Participants of this biennale explore the boundaries of personal freedom, habitual self-doubt, setting limits, radical changes and exaggerating the meaning of obstacles, the website said.

Street art is a modern form of visual art expressed as monumental paintings, graffiti and urban installations in public locations. The works of street artists can be seen in large cities around the world.