By Anuar Abdrakhmanov in Sports on 14 September 2016 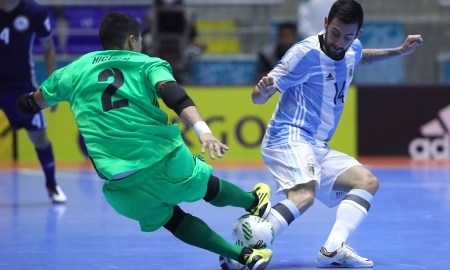 The match marked the second time Kazakhstan has participated in the top flight FIFA Futsal World Cup.  The first time was 16 years ago in Guatemala where it qualified from the Asian confederation. The team then lost all three group stage matches to Brazil, Portugal, and the hosts.

This time Kazakhstan is placed in Group E, which also features Argentine, Costa Rica, and the Solomon Islands.

Before the matchup with Argentina, the Kazakh team faced damaging personnel losses. The team’s three leaders – Serik Zhamankulov, Everton and Chingiz Yesenamanov were unable to take part in the game.

The game began with attacks from the Argentineans. However, the first truly dangerous attack was created by the Kazakhs – following a good corner by Douglas. Nurgozhin struck heavily on the fly, but the keeper of Argentina was in place. Argentina was seriously prepared for Kazakhstan’s team play because once Kazakhstan goalkeeper Higuita tried to join the attacks, he was immediately and vigorously pressured by the opponent. When Higuita tried to get out and join the attack, the opponent overlapped all areas and would not let any of the Kazakh players adjust. This tactic brought Argentina good results. Thirty-eight seconds before the end of the first half, the Argentines intercepted the ball after Kazakh goalkeeper Higuita left his position and scored into an empty net.

In the second half, the Argentines played on to safeguard the score and did not leave much space for opponents to maneuver. That helped them take all three points. At the end of the second half, when the Argentines were a bit tired, the Kazakhs began to appear ready to play to a draw. However, fortune was not on Kazakhstan’s side and Argentina’s goalkeeper showed great skills. Kazakhstan next meets Costa Rica Sept. 16 at 5:00 a.m. Astana time. KazSport TV will broadcast the tournament live.