By Anuar Abdrakhmanov in Sports on 28 September 2016

ASTANA – Kazakhstan reached the top 16 of the FIFA Futsal World Cup in Columbia before being eliminated recently in the second round by Spain. 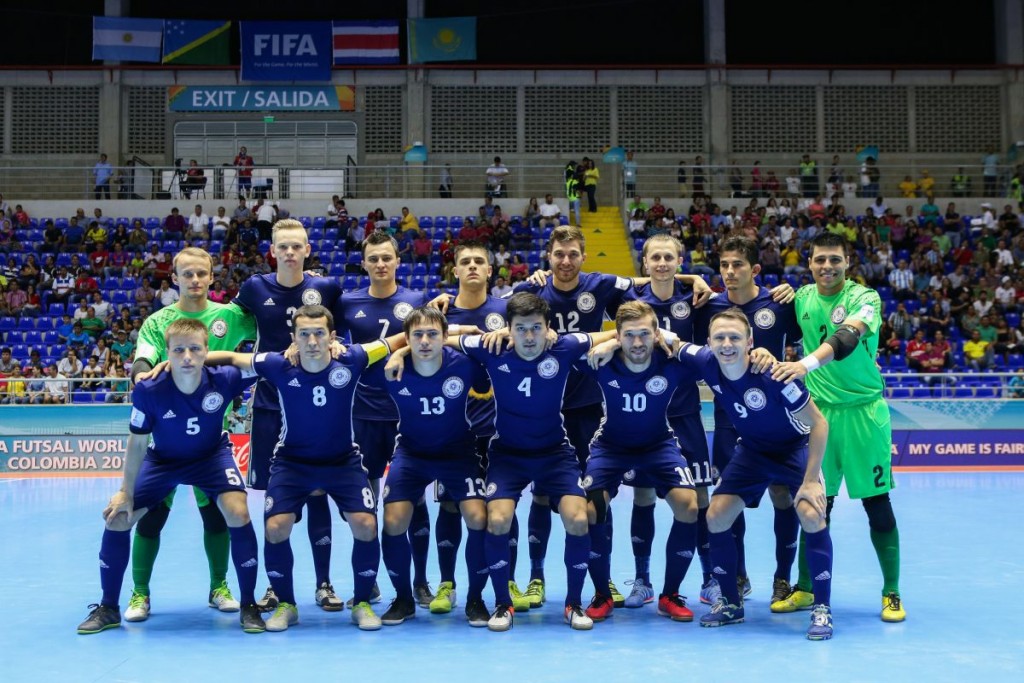 The team, led by Brazilian Head Coach Ricardo Sobral, who goes by the name of Cacau, took second place in Group E after Argentina and ahead of Costa Rica and the Solomon Islands. This allowed Kazakhstan to reach the playoffs round of 16.

In its opening match in Colombia, Team Kazakhstan lost to Argentina 0:1.

The second opponents were Costa Rica. The Kazakhs went ahead early on the 58th second of the game thanks to a goal from Douglas. After 15 minutes, Alejandro Paniagua evened the score but a minute later Pavel Taku again brought Kazakhstan forward.

As the second half commenced, the Kazakhs earned a free kick. Leo passed to Douglas and the latter heeled the ball into the net. The result stood and Kazakhstan secured quite a convincing victory of 3:1. The win was the first one in the history of Kazakhstan’s participations in the World Cup.

In the final match in the group stage, Kazakhstan annihilated the national team of the Solomon Islands 10:0. In the fourth minute, Alexander Dovgan completed Leo’s cross to score the opener. A bit later, Arnold Knaub volleyed the ball over the opponents’ goalkeeper. Douglas’s powerful shot increased Kazakhstan’s advantage and the first half was summed up by Leo’s goal.

At the start of the second half, Knaub scored his second, then one more came from Pavel Kaku’s roundhouse kick. Douglas scored the seventh with a long-range strike and Ilya Mun earned the team’s eighth. Taku and Nicholay Pengrin scored the last two goals in the match.

The win meant Kazakhstan took second place in the group, behind Argentina, and for the first time in its history reached the last 16 of a World Cup.

“To qualify from a group is a good result. But we do not want to stop there. We have great respect for [our next opponent] Spain and understand their strength. Of course, we will be motivated by a desire to take revenge for the defeat in the Futsal Euro. We will stick to our tactics with our goalkeeper Higuita coming forward. We will train to win,” Cacau commented before the second round.

The Spaniards took the lead in the third minute after a long shot from Sergio Martinez Lozano. However, two minutes later Chingiz Yessenamanov equalised. At the beginning of the second half, Bebe again pushed Spain ahead. The Kazakhs managed to level the score again. This time, a beautiful attack resulted in a goal from Dauren Nurgozhin. Unfortunately, just eight seconds later he slipped the ball into his own team’s net.

Higuita allowed two more goals into team Kazakhstan’s net at the end of the match. The Spaniards scored one of them while playing in minority – Raul Campos took advantage of Taku’s mistake and a minute later Miguelin scored into an empty goal. As a result, the match ended 2:5 in Spain’s favour.

“The first game against Argentina was a hard one. Then against Costa Rica our players played well and the game with the Solomon Islands was the best one for us. In the playoffs, it was Spain again. This rival [to me] is the best team in the world. We had a plenty of chances but in futsal when you do not score then there is a problem and you lose. The result, of course, was a bad one for us. Many people say that we played on a par with Spain,” said Cacau.

He also said that after the FIFA Futsal World Cup he would stop training the national team.

“I will finish my work with the national team. I just want to deal with Kairat [a futsal club from Almaty] because I am tired. Four years that’s been a lot,” said the 44-year-old Brazilian.