By Anuar Abdrakhmanov in Sports on 2 September 2016

ASTANA – A ceremony honouring the Kazakh Olympic team’s successful performance at the XXXI Summer Games in Rio de Janeiro was held Aug. 26 in the Palace of Independence. The nation’s athletes returned with 17 medals in various sports – a record in the nation’s Olympic history, ranking the team in 22nd place among the 207 participants in the unofficial medal tally. 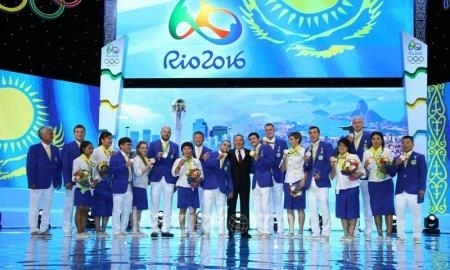 “Olympic medals, high sports results and the achievements of our athletes are a worthy gift for the upcoming 25th anniversary of Kazakhstan’s independence. You met the expectations of not only your coaches and fans, but also of all the people of Kazakhstan, and confirmed the high standard of the international sporting glory of our country,” he said.

The head of state noted the medals represent a decent level of sports development in the country.

“This [medal haul] is more than ever at other games in the history of Kazakhstan’s participation in the international Olympic movement… We are proud that on the Olympic podium in Rio the national anthem was played and the flag of our country was raised three times [to celebrate] our Olympic champions – boxer Daniyar Yeleussinov, for the first time in our history swimmer Dmitry Balandin and weightlifter Nijat Rahimov. A huge contribution to our Olympic success came from five silver and nine bronze medallists,” he said.

Nazarbayev also thanked the coaching staff, families of the Olympians and sports fans for their support of the team and the athletes themselves for showing the strong will and fair play spirit in their quest for Olympic glory.

The President emphasised the success of the national Olympics team served as an inspiration to its fellow Paralympic athletes at the upcoming fifteenth Summer Paralympic Games in Rio and wished them good luck and good results.

Nazarbayev noted the nearly quarter-century of Kazakhstan’s participation in the international Olympic movement has been marked by many bright victories of its athletes.

“Kazakhstan’s collection of Olympic medals, including the awards won by Kazakhstan in Rio, already accounts for 69 medals. Our country has 19 Olympic champions, 22 silver and 28 bronze medallists of the Summer and Winter Olympics since 1992. These accomplishments became real thanks to [the government’s efforts on] creating conditions for the development of sports,” he said.

The large pool of silver and bronze medallists, he added, suggests good prospects for the national team’s future performances.

“In every silver medallist we see the golden one in the future… It was quite symbolic that our judokas went up to the podium on the first day of the Olympics. It was a strong statement that the national team [would pursue more] victories. The success of our boxers Adilbek Niyazymbetov and Vassiliy Levit, vice-champions of the latest Olympics, followed. We all know that both of them can be viewed as gold medallists, too. Therefore, in today’s ceremony I have equated them in promotion to those who received a gold medal,” he said.

Nazarbayev also praised Kazakhstan’s veteran track and field athlete Olga Rypakova who was unable to attend the ceremony. She was participating in the Diamond League competition in Lausanne where she won a silver medal.

“I would like to note separately how Olga Rypakova defended her position at the top level in the world of track and field. Her bronze success from Rio is an almost golden one. Between London and Rio she gave birth to a son who is now three years old, her second child, while keeping herself in form and maintaining her athletic qualities. Impressive job indeed! First, a mother, and second, a heroine!” he said.

During the ceremony, Nazarbayev decorated the Olympic champions and medallists with state awards. Levit, who suffered a highly-arbitrary loss in his final bout, was decorated with the same award as the one received by Olympic champions Balandin, Rahimov and Yeleussinov.

An athletes’ celebration was also held the previous day by the National Olympic Committee (NOC). Committee President Timur Kulibayev congratulated the team on its brilliant performance at the Games and handed the most successful athletes the awards arranged by the country’s Olympic authority.

Kulibayev emphasised the committee’s gratitude to all the coaches and the accompanying official delegation for creating the most favourable terms for the athletes’ successful performance.

He also commended the assistance rendered to the national team in Rio by Kazakh diplomats.

“On the whole, despite some difficulties Brazil managed to hold the Olympics at a decent level. There were no [serious] failures, although there were such fears [before the event]. For about a year we were engaged in the work of creating good conditions for our team in Rio de Janeiro. A lot of help in this regard came from our country’s first ambassador to Brazil Bakhytzhan Ordabayev. Despite having recently completed his official mission there, nevertheless he returned to Rio with us and helped in solving numerous issues on the ground. Brazil is a distant country for us, with a different language and culture [so there were some challenges]. We must also note the assistance our delegation received from the current ambassador Kairat Sarzhanov and the staff of the Kazakh Embassy in Brazil. I want to sincerely thank our diplomats for the work they did in Rio,” said Kulibayev.

He also noted the work of the Kazakh media delegation that covered the national team’s performances at the Games.

“For the first time we had 20 sports journalists from Kazakhstan reporting on the Olympics from the ground. The best conditions were created for their work so that they could report timely and qualitatively back to Kazakhstan on our athletes’ performances. A telecasting studio was created at the Kazakh press centre in Rio where broadcasts involving the athletes were recorded and transmitted live. Our main task was to allow the fans in Kazakhstan to receive the latest information from Rio on how the team performed. We thank the media representatives, too, for their cooperation,” said Kulibayev.