By Anuar Abdrakhmanov in Sports on 3 September 2016

ASTANA – As the result of a two-leg encounter, FC Astana passed Belarusian champions BATE Borisov in the Europa League playoff round for the first time and will play in a group stage of the tournament. 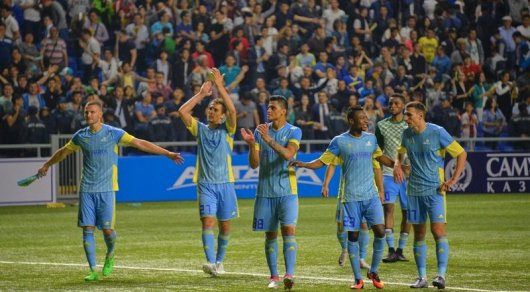 In the first match on Aug. 18, the Kazakh champions managed to secure a formidable lead by claiming a valuable 2-0 victory at home. The return leg a week later at Borisov Arena ended in a 2-2 draw.

Encouraged by the home stands, the BATE players, knowing they had to win if they wanted to stay in the competition, went forward with a large force. A dangerous cross into the penalty area ended with Alexei Rios’s imprecise strike. The Belarusians tried to attack mainly through Astana’s right flank, ironically defended by their compatriot Igor Shitov. A nice exchange of passes resulted in Mirko Ivanic coming one-on-one against Astana’s goalkeeper Aleksandr Mokin and the guests were lucky the ball was close but away from the far corner.

The Astana players nearly went ahead for the first time closer to the 15th minute of the match when Patrick Twumasi struck low from inside the penalty area, but the host team’s goalkeeper Artem Soroko managed to deflect it to a corner kick. A bit later BATE’s Vitali Rodionov picked up the ball within Mokin’s penalty area, but his strike closely missed the target.

In the 27th minute, Mikhail Gordeichuk got the ball almost at the edge of the penalty area. His shot, a ricochet, helped the ball end up in the net behind Mokin for a 1-0 lead for the hosts. Before the break the teams exchanged a few dangerous attacks, but the score remained unchanged until the whistle blew signalling the end of the first half.

FC Astana’s Bulgarian manager Stanimir Stoilov used the break to make two substitutions to start of the second half. Sergei Malyi and Abzal Beisebekov replaced Yuri Logvinenko, who was injured, and Azat Nurgaliyev, who had not been too active on the field.

The changes could have played a role, as immediately after the break a corner kick resulted in Nemanja Maksimovic heading the ball straight under the crossbar to tie the score at 1-1. BATE now had to score three to progress to the next round, so the home team and its fans were understandably nervous. Its attacks, however, brought few real threats on Mokin’s goal. Fourteen minutes from the end of the match, a foul on an Astana player near the penalty area resulted in a free kick, which was brilliantly converted by Twumasi to put the visitors ahead, 2-1.

The final minutes will be remembered for a couple of rough episodes. At the 82nd minute mark, a brawl on the pitch resulted in a red card for BATE’s Rios. With one minute left in regulation, BATE managed to even the score on a goal from the penalty spot by Igor Stasevich.

FC Astana won 4-2 on aggregate and advanced to the group stage. Astana became the second Kazakh club to play at this stage of the tournament – the pioneer in this respect was Shakhter Karaganda in the 2013-2014 season.

“This year, we did a great job. For the second straight year we made our way to the group stage of a European cup. We were somewhat lucky, as BATE admittedly was the better side tonight. Nevertheless, I believe our win was a clean one. Now we will have to focus on how to adequately address [challenges] on the main stage of the Europa League,” said Stoilov immediately after the match.

“The first 15 to 20 minutes we had a hard time. Missed a bad goal. Played a bit poorly at the beginning and allowed BATE to threaten us through the flanks. In the second half, the manager made substitutions that had an impact on the game and we were able to bring the encounter to a logical conclusion. We achieved the result that we wanted and we reached the group stage of the Europa League – surely that is the most important thing for us. We are glad we managed to please our fans back in Kazakhstan. This is yet another achievement for our football,” said FC Astana defender Dmitriy Shomko.

A draw at UEFA Swiss headquarters on Aug. 26 resulted in FC Astana being sent to Group B, where it will play home and away in the round robin with Greek champions Olympiakos FC Athens, APOEL Nicosia from Cyprus and BSC Young Boys from Switzerland’s capital city of Bern. Matches at the group stage will be held Sept. 15 and 29, Oct. 20, Nov. 3 and 24 and Dec. 8.

Astana’s first game will be away Sept. 15 against APOEL. One might recall it was the elimination of the Cyprus champions a year ago in Nicosia that brought the Kazakh club’s first ever qualification in the UEFA Champions League. The Cypriot team will have a chance for revenge, but hopefully Astana will be the better side again.