By Zhanna Shayakhmetova in Nation on 14 September 2016

ASTANA – In 1716, a city in modern China and areas of ​​Balkhash and Zaisan lakes were destroyed as a result of a devastating earthquake that supposedly occurred in Kazakhstan. This was announced by Oxford professor and famous seismologist Richard Walker at the Science of Earthquakes and Their Risks in Central Asia conference. Initiated by Shakhmardan Yessenov Science and Education Foundation, the event was held with the support of Earthquakes Without Frontiers International Project, reported Tengrinews.kz. 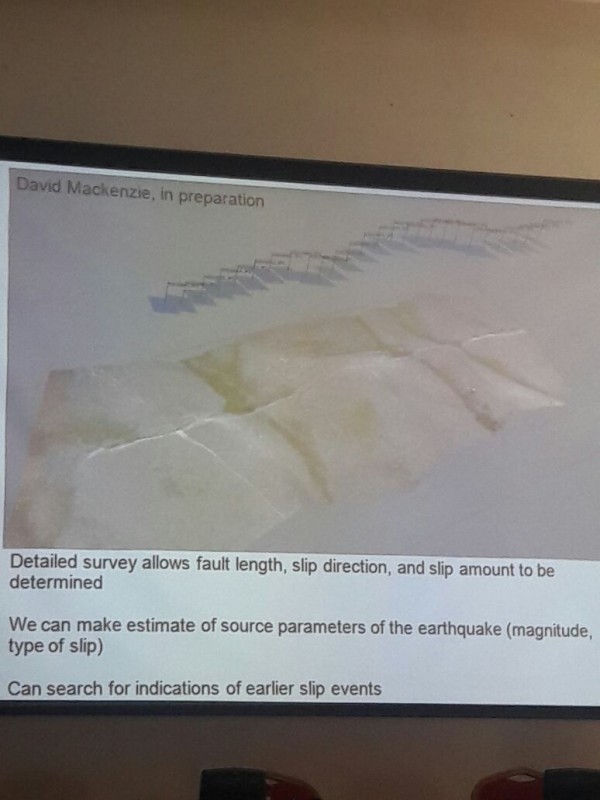 Walker presented the results of the research conducted by experts who studied fractures and cracks in the earth’s crust formed as a result of earthquakes in the Almaty region. He explained that the fault is essentially a huge crack in the rocks.

“Plates are kept next to each other with the friction force. But a slight movement occurs. It looks like two hand palms together. When you squeeze them harder and harder, gradually they are able to move relative to each other in different directions and then again gain a foothold. Then the pressure continues to accumulate force. The similar processes happen during an earthquake. The plates are pressing against each other. As they shift, it causes an earthquake. We cannot stop these processes as such forces gradually formed the Tien Shan mountains. We are talking about the plates shift to tens of kilometres in depth and hundreds kilometres in width,” he said.

Walker demonstrated the so-called Lepsy fault near the Lepsy village and the Jungar Alatau Mountains. According to the researchers, the tectonic plates shifted about ten metres.

“When the earthquake occurred, it changed the channel of the Lepsy River. We found out that the quake occurred about 400 years ago when we examined the deposits in the old channel. It is surprising, but we see no historical records of the event. Probably we can talk about the earthquake in 1716. The historical records describe the destruction in the region of Balkhash and Zaisan lakes, as well as in Aksu city in China. But we cannot say it with absolute certainty,” he added.

According to the scholar, this fact was taken from the Catalogue of Earthquakes in the Russian Empire written by Mushketov and Orlov. 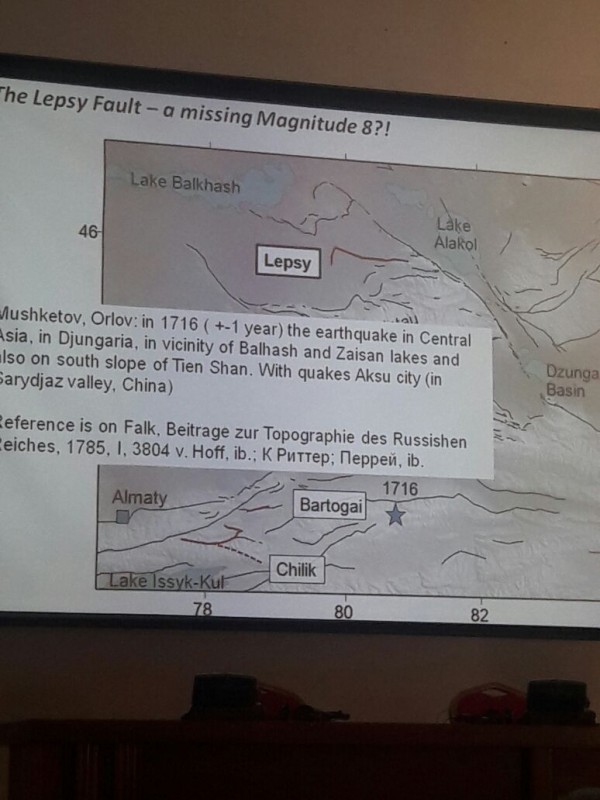 “The historical record itself is quite strange. It describes Aksu in the Sarydzhaz Valley and Balkhash and Zaisan. It is difficult to imagine that any earthquake caused damage to the places located hundreds of kilometres from each other at the same time. Maybe they mixed the two earthquakes, one that happened in the south and another in the northern Tien Shan,” said Walker.

Walker also described other cases of destructive earthquakes. The fault after the Chon-Kemin earthquake in 1911 was documented by a team of scientists immediately after the event. It is still visible. The fault length is 250 kilometres, the shift of tectonic plates is ten metres, which is indicative of magnitude greater than eight.

“The landscape in Kazakhstan, Kyrgyzstan and the Tien Shan mountains is very well preserved so that we can visually identify evidence of historical earthquakes. We can analyse other earthquakes using the example of 1911,” he said.

He explained that the faults have been detected and investigated using satellite maps. The age of earthquakes was determined by excavation and sediment research.

At the moment, the researchers have been studying the fault of 600 kilometres in length in the Jungar Alatau Mountains.