Bishkek – Getaway for Pleasure and Business

ASTANA – You’re a non-native, have been working in Kazakhstan for a while, maybe years, and have done some travelling around the country but seeking new experiences and adventures? Ever thought about going to Bishkek, the capital of Kyrgyzstan? Here are some tips of dos and don’ts of visiting Kazakhstan’s neighbour and what to look for while you’re there. 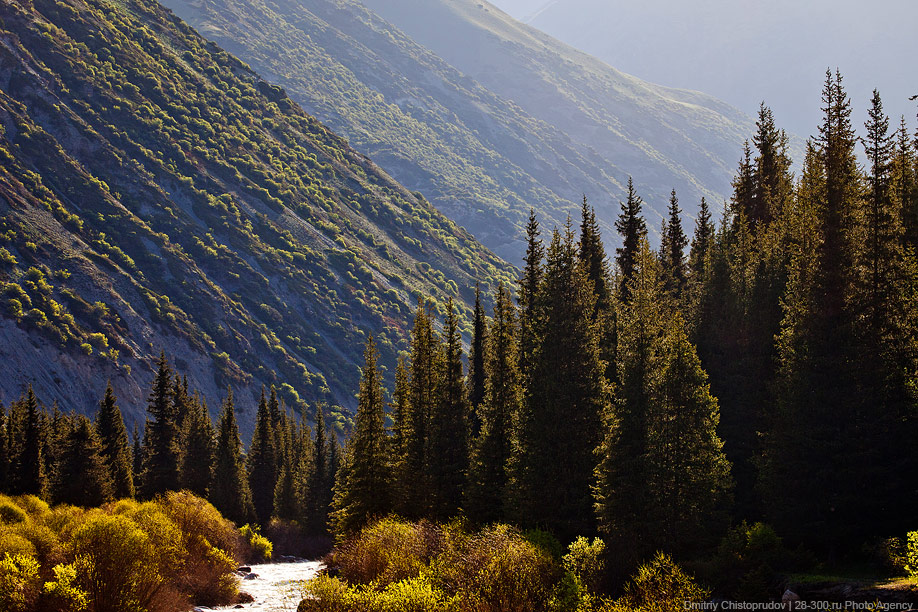 This trip could save money for those passport holders who need to travel outside the country every three months to get their Kazakhstan visas reissued, as they won’t need to fly but could easily take a cab, train or bus. All they have to do is travel outside Kazakhstan and return, so why not check out Kyrgyzstan? Surely, this seems the most convenient option for those residing in Almaty. But, as easy as it might seem, this could be the worst nightmare. Here is how to avoid trouble.

Numerous online reviews and feedbacks indicate it is best to be at the border either before the early birds or after the night owls and avoid weekends, unless elbowing and sweating in long queues is something one enjoys.

“It is an absolute disaster during rush hours, unfortunately,” said a source who preferred to only reveal his first name – Andrew. “We arrived at around 12 a.m. once and it was just fine; the immigration officers were friendly, did take a while but that’s part of their job, let’s be objective. But on the way back we were coming back at around 5 p.m. on Sunday and let me tell you, it was a catastrophe if anything! The tiny corridor was packed; it was stuffy and it took us about four hours to eventually cross the border. So stay away from the place during the rush hours. I wish someone had told us to do the same before we had started this trip.” 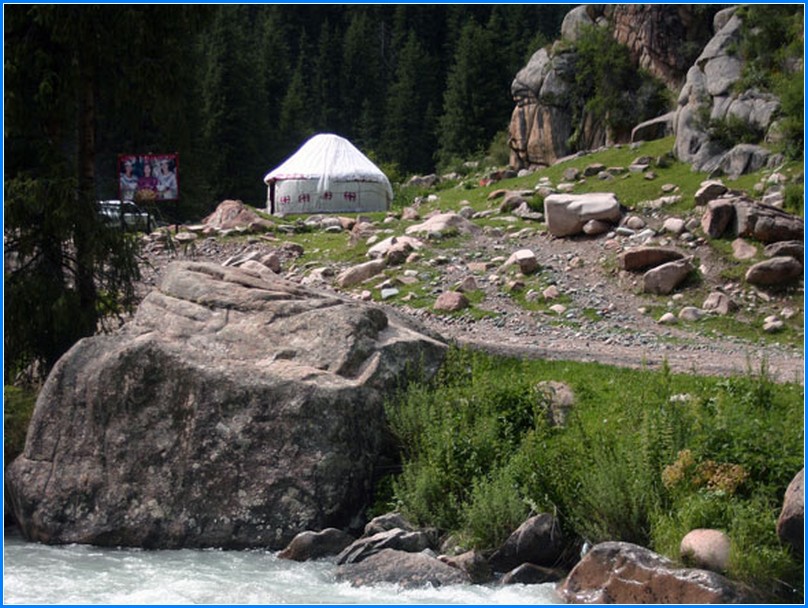 “But once in Kyrgyzstan, there are so many places to visit,” said Andrew. “Lake Issyk-Kul is definitely a go, which is about three-hour drive. Lake Song Kol as well, absolutely stunning scenery,” he said.

The lack of infrastructure and conveniences along the roads, however, is a concern.

“Stay away from the road toilets if possible, especially when in rural areas, and also be particularly picky as to what you choose to eat,” he said. “When travelling your stomach is extremely sensitive to unknown foods and liquor, so better be specific with what you eat and be picky, especially if you’re not too fond of the local cuisine.”

In general, the things to do are similar to those in Kazakhstan. 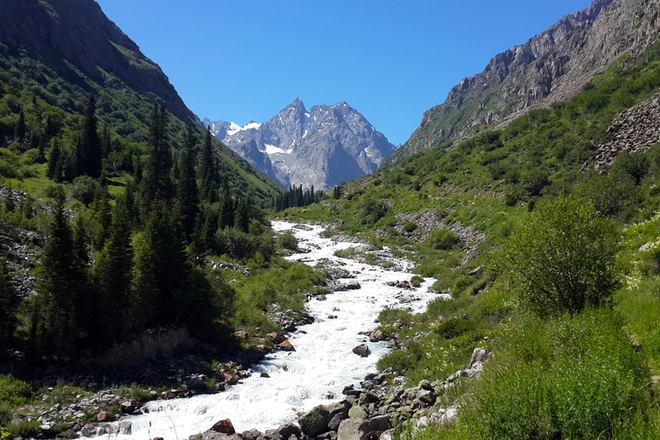 “We went to the Grigoriev Gorge around Issyk-Kul Lake and there are ethnic yurts and tiny villages where you can dine and even stay overnight. They do their little acts and manifest just how their nomadic ancestors lived, cooked, played and so on. You get to eat traditional dishes much like in Kazakhstan and go horseback riding around the lake and the mountains. Two things that are absolutely gorgeous and outstanding about the place were the freshest-ever air and the breath-taking views of the mountains that are overlooking the cleanest-ever Issyk-Kul Lake, as if gods are watching you repose in their grace. Everything about the place was magical, even the manure that once in every fifth step did interfere between the sky and the ground,” said Andrew.

Located on the northern shore of Issyk-Kul Lake 60 kilometres from the town of Cholpon-Ata, Grigoriev Gorge is one of the biggest settlements on Issyk-Kul Lake’s northern shore. It is often cited as the best place to visit on the trip to Issyk-Kul. The area is prided with green mountain slopes and covered with red poppies, coniferous aroma and three beautiful crystal clear lakes. After horseback riding or trekking and hiking visitors are invited to the ethnic village, which opens up the Kyrgyz culture and the national cuisine in one of the yurts specially set up in the village. There one can also listen to Kyrgyz folk music, drink kumys and submerge oneself into the Kyrgyz lifestyle. Those who seek extreme adventures should try falcon hunting. Getting there would be easier from the town of Cholpon-Ata; any taxi or local tour guide would be able to book the yurt for anyone or by contacting tour agencies in Bishkek. 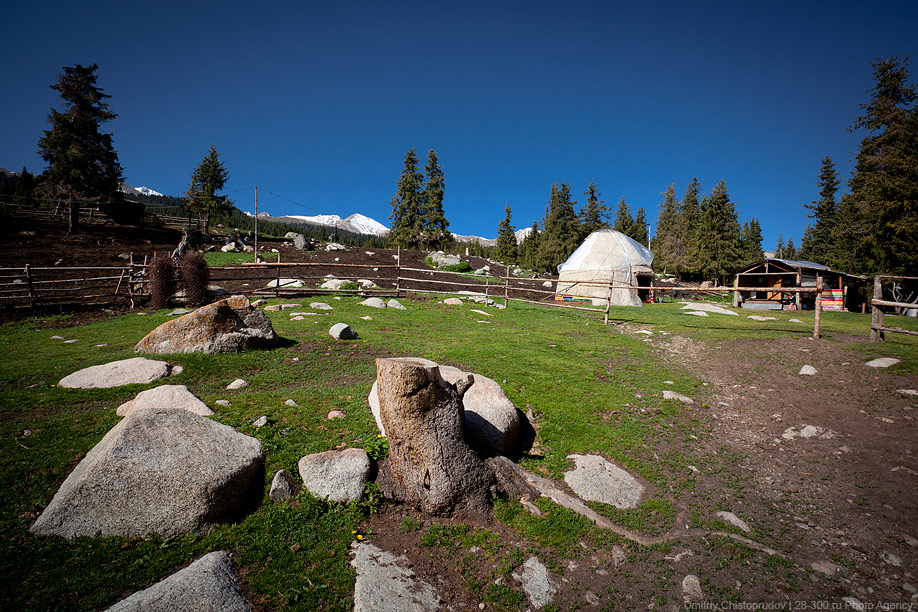 The capital city of Bishkek, however, didn’t feel the same.

“The capital has not changed much from the Soviet days as far as I could tell; it didn’t give the feeling of a major transformation. The bleak old-fashioned streets, tacky billboards, cocky drivers and contemptuous local drifters didn’t necessarily make us feel safe, throwing glances over our shoulders every now and then. The old Soviet monuments can be found around the city squares, and overcrowded bazaars on weekends are something to experience but overall, it was safe and fun. People are friendly and nice, everything was dirt cheap and the food was delicious. Right off the bat, go and check out the main square and Ala Archa Park, which is about 20 minutes away from the downtown. Nice fresh air, mountainous views, murmuring brooks – that all is, of course, perfect for weekend getaways and picnics. In the city, on any given day I would not trade anything for socialising with locals; they’re really, really friendly, at least they were to us – foreigners,” said Andrew.

The reserve is a small valley inside a gorge; its ridges are covered with ice, while the slopes are covered with the finest spruce forests. The streams flow down from the glaciers along the slopes and eventually run into the Ala-Archa River. The park is great for group picnics and also for hikers and climbers. There are numerous trails of various difficulties. Some go for over 10 kilometres of steep climbing and as a reward you get to witness the snow-capped peaks, freezing turquoise lakes surrounded by snow and rocky slopes and unearthly views from the top of the mountains. For such ascends, however, it is strongly advised to have proper gear. 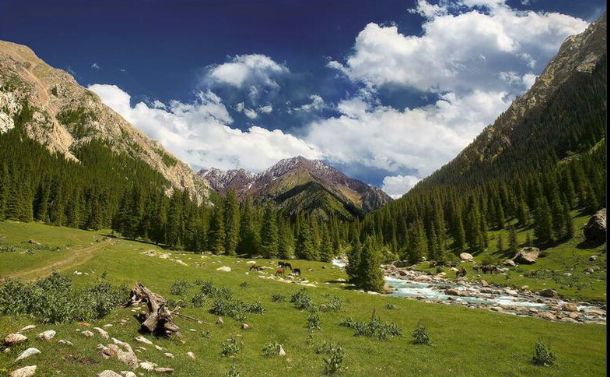 “What really impressed me about this country was nature, which is absolutely captivating. Standing on the tops of smaller hills and I am not imagining beating the taller peaks and mountains, I can truly appreciate the doings of the almighty and all the paths that intertwined throughout the bumpy roads in our way. Would I go again? Oh, yes!” he said.