ASTANA – Aktau’s new northern seaport officially became an international port when an Iranian ship was loaded with Kazakh metal and grain there. 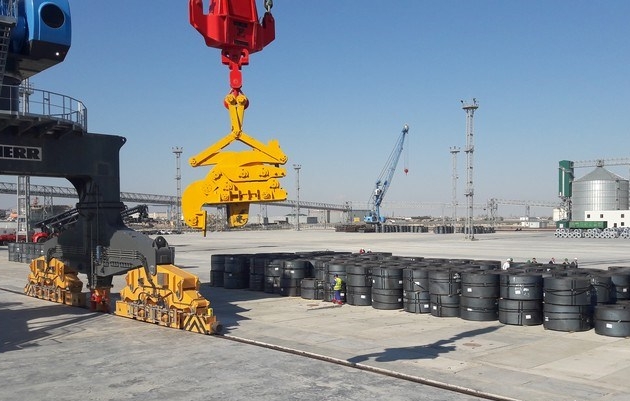 “This is the first Iranian ship that has arrived for loading at the new Aktau seaport. The seaport was put into operation in the summer of 2015, but it was only used as a domestic seaport, because it had no customs body. … Today, the first foreign vessel arrived at the northern port, because it can operate with foreign ships from today and now has the status of an international seaport,” said Deputy Akim (Governor) of Mangistau region Rakimbek Amirzhanov, Kapital.kz reports.

Amirzhanov noted that the event also became possible after the removal of sanctions against Iran.

The vessel was loaded with 45 tonnes of metal from Karaganda and grain from North Kazakhstan. The northern seaport is technically equipped for large weights and has the ability to unload 80,000 tonnes of grain at once with its new cranes. The port also has an elevator that can store 30,000 tonnes of grain.

Having two seaports gives Kazakhstan’s producers of grain and other goods an option, and today, a real competition between the seaports has started.

The opening of the new port has made it possible to employ more people. A state programme supported a staff training programme for local young people, who now work as dockers, tallymen, mooring masters and slingsmen.

It is possible that the port will be used to import goods from Iran in the future. Amirzhanov said it was highly likely that agricultural products from Iran will be imported, especially oranges and mandarins, which can’t be grown in Kazakhstan. This will enhance cooperation and will make such goods cheaper in Kazakhstan.

“It is very important that we can have Iranian mandarins on our tables on New Year’s Eve, and they will be cheaper than last year, despite the devaluation of the tenge,” he added.

Amirzhanov highlighted that the new international seaport will surely contribute to the competitiveness of Kazakhstan’s grain and metal.

Iran’s Ministry of Transportation subsidises all Iranian vessels that use Kazakh seaports, covering their expenses, he said. This makes transport via Kazakh seaports profitable for Iranian buyers of Kazakh metal and grain.

Thus, cooperation with Iran, with its previously inaccessible market of 80 million people, will be very important for Mangistau region. Amirzhanov emphasised the solvency of the country and said that it has a very good, stable and strategically important market.

“Increasing export is beneficial for our economy. Exporting grain is even more beneficial than oil, because it is a renewable product. It is very important that the farmers of the North Kazakhstan region have an opportunity to sell their goods, their grain, to foreign markets for foreign currency. It is important for the economy and at the same time it ensures the domestic food security of our country,” he said.

“I congratulate you with the opening of the northern port of Aktau. … The opening of the northern and southern corridors will enable Kazakhstan to enhance cooperation with Iran to go beyond the sea to the oceans. Today, we have witnessed such an event. We plan to carry up to 200 tonnes of metal from Kazakhstan to Iran in the end of October. Today’s shipment amounts to 45 tonnes of metal. This is the first cooperation with the new port. I am very happy for Mangistau and Kazakhstan,” Adib said.