By Aiman Turebekova in International on 20 August 2016 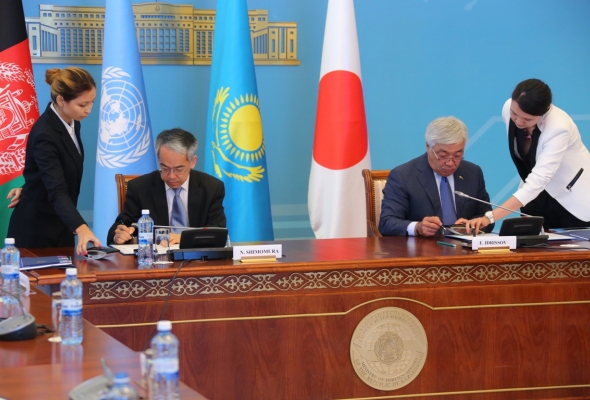 “We are happy that the first pilot project has been done successfully. Kazakhstan has already allocated $40 million to Afghanistan. We are training Afghan students in Kazakh universities,” said Idrissov at a signing ceremony at the Ministry of Foreign Affairs in Astana on Aug. 19.

As the initial project, it will help Kazakhstan strengthen its ability to administer its future official development aid (ODA). The most important task of this activity, however, is to make a fair contribution to Afghanistan’s further development by expanding the economic independence and rights of Afghan women.

KazAID, Kazakhstan’s fledgling official ODA, is the first programme among the Central Asian states and one that will begin with a neighbourhood focus. The Japan International Cooperation Agency (JICA) is expected to provide an opportunity to Kazakhstan to adopt best ODA practices.

“Many reform efforts in Kazakhstan are done in the context of our ambition to join the OECD (Organisation for Economic Co-operation and Development). Official development assistance is a very important part of OECD,” said the Kazakh minister.

Creation of KazAID in the first years of the sustainable development goals (SDGs) signifies Kazakhstan’s serious commitment to contribute towards this international agenda, he added. The nation has already provided humanitarian and development assistance to countries in Central Asia, Latin America and the Pacific.

Promoting Kazakhstan’s ODA Cooperation with Afghanistan is aimed at improving the economic independence of Afghan women. In particular, Kazakhstan will share its experience in the fields of public administration, health and education.

“The basis for this project is the joint statement signed by Japanese Prime Minister Shinzo Abe during his visit to Kazakhstan in October last year and President of Kazakhstan Nursultan Nazarbayev. I hope that implementation of the project will be a good opportunity for Japan to contribute actively to the measures undertaken by Kazakhstan for stabilising the situation in the region,” said Japanese Ambassador to Kazakhstan Ichiro Kawabata.

“Kazakhstan, Japan and UNDP in Afghanistan provide a complex range of support to promote gender equality in the country, including providing policy support and capacity development to the ministry of women’s affairs. We need this support,” added Afghan Ambassador to Kazakhstan Mohammad Farooq Baraki.

In December 2014, JICA invited seven officials from the Kazakh government to learn about the experience of Japan’s ODA system and its history in Tokyo.

UNDP has helped the international community to build and share solutions to the challenges of democratic governance, poverty reduction, crisis prevention and recovery, energy and environment and women’s empowerment. Kazakhstan is capable of providing consistent assistance to other nations, thus strengthening its position as a leading country in Central Asia.