By Kamila Zhumabayeva in Nation on 2 August 2016

ASTANA – The press service of Almaty’s Department of Internal Affairs (DIA) has announced that two policemen who were injured in the July 18 shooting spree in Almaty by Ruslan Kulekbayev died Aug. 1, bringing the death toll of the attack to eight. 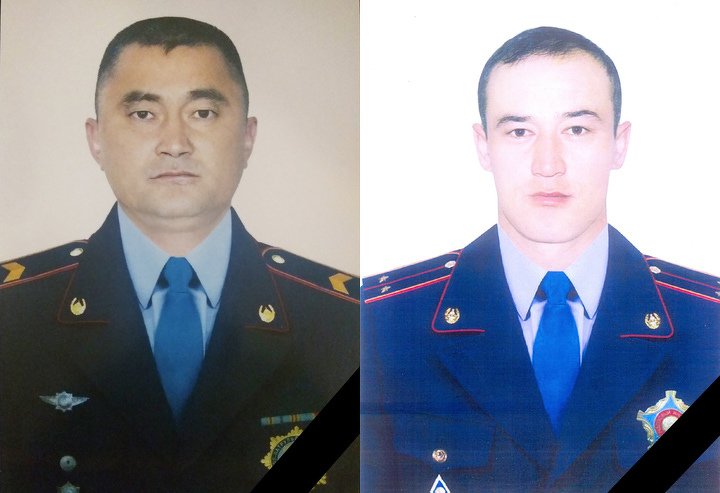 “Two policemen who suffered gunshot wounds while combating the unlawful acts by Ruslan Kulekbayev died in the critical care unit of Almaty’s first aid ambulance hospital. Doctors were fighting for their lives until the end. Unfortunately, their injuries were serious,” said the Aug. 1 statement.

Abildayev, born in 1973, was a member of the road patrol regiment of the local police service of Almaty’s DIA.

He served in internal affairs agencies since 1994 and had been awarded first, second and third degree medals for flawless activity in internal affairs agencies, a badge honouring his 20 years of service to Kazakhstan’s police, and certificates from the Kazakh Ministry of Internal Affairs and Almaty’s DIA during his service. Abildayev was married and had three daughters.

Rakhmatullayev, born in 1992, was a DIA district inspector for the Almaty region and had joined the police force in 2012. He was repeatedly awarded by the Ministry of Internal Affairs and Almaty’s DIA for his service. Rakhmatullayev was married.

“The leadership, the veterans’ council and the personnel of Almaty’s internal affairs department express their profound condolences to the relatives and loved ones of Abildayev and Rakhmatullayev,” the DIA press service reported.

On July 18, Kulekbayev, a 26-year-old native of Kyzylorda region who had twice served time in prison for armed robbery and possession of firearms and who was suspected of killing a female citizen of Uzbekistan the night before, attacked a police station in Almaty.

At the time, six people lost their lives, among them four policemen, one retired Internal Affairs Ministry worker and one border guard officer who was off-duty. All police workers were married with children.

The attacks were motivated by revenge against law enforcement bodies and initiated and executed by Kulekbayev alone, authorities say. Kulekbayev’s case will be investigated under several articles of the Criminal Code, including “Killing of one or more persons,” “Terrorism,” “Attacking state bodies” and “Resisting detention.”