The Life of a Global Nomad: Kazakh Conductor Alan Buribayev

By Malika Orazgaliyeva in Culture on 18 August 2016

In a recent interview with Kazakhstanskaya Pravda newspaper, world-famous Kazakh conductor Alan Buribayev discussed his childhood, the beginning of his musical career and his present life. Today, as chief conductor of Astana Opera, Buribayev works with the best orchestras around the globe. 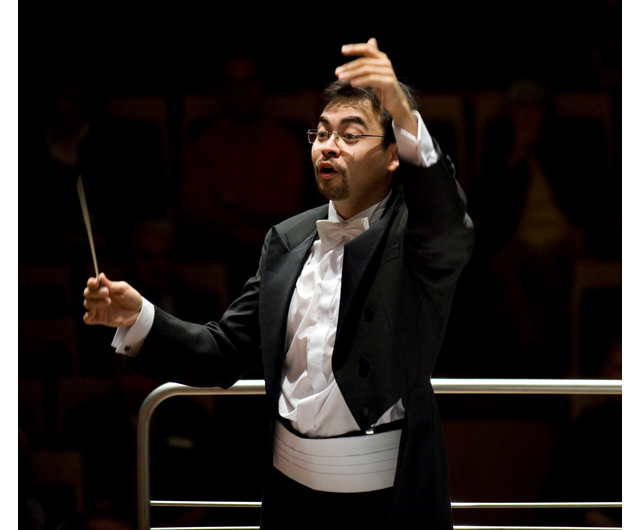 Tell us about your early love of music.

I was 11 years old when I was suddenly uprooted from my accustomed environment: several Kazakh musicians, among them my parents, were invited to work in Greece. Today, I, of course, recall very warmly the time spent in that beautiful country. But at that time it was a new country, a different culture, a new language for me. I went to the sixth grade of a local gymnasium not knowing a word of Greek. This language, by the way, is unique, not like any other language in the world. It was Greece which gave me the first impulse to be seriously involved in symphony music. I started to like the music of Richard Wagner, one of the greatest opera conductors in the world. Many serious musicians approach his music at a more mature age. However, I reached out to Wagner when I was 13 or 14 years old. I really, really liked his music. I had no difficulties in understanding it at that time, nor later when I started to conduct his works.
Thanks to the works of Wagner I had a great desire to study the German language. I sat down at a grand piano and, playing claviers, sang his operas in the original language. I should say that the language of Wagner is not modern [standard German]; it is the German language of the 19th century, rich and figurative. This is not surprising, since the composer’s creativity was influenced by the philosophy of Schopenhauer and Schiller’s poetry.

Yes, previously it was considered that conducting requires some life and music experience. Anyway, first, one needs to obtain higher education as an instrumentalist or musicologist, and only then enter the faculty of opera and symphony conducting. But it was so interesting for me that I hadn’t even thought to follow such a limiting practice. Before going abroad I studied at the Kulyash Baisseitova music school and played quite well already, but conducting more and more allured and captured me. I remember that for my birthday when was a teenager, I asked my parents to buy me scores instead of toys. My father and mother … noticed that I was interested in serious classical art. They only encouraged me.

My interest in languages is also related to some extent to the world of opera. I know five foreign languages, and I learned English, German, Italian and French through Greek. This helps me to quickly enter the figurative world of the Italian opera.

After your early start, what difficulties have you faced in your 20 years of conducting?

Indeed, difficulties are still there, every time I stand before a new crew in a new country. I assess the maturity of the conductor not by the years he or she lived, but by the number of programmes and pieces conducted. And today I can say that I have conducted virtually the entire main symphonic repertoire of a conductor. That is, my repertoire includes symphonies of Mozart, Beethoven, Mahler, Brahms, Mendelssohn, Prokofiev, Shostakovich, Tchaikovsky and Rachmaninov, played repeatedly. More than 20 operas were staged in different countries. These are very mature works written not by ordinary people, but by the best representatives of humanity.

There is a story that you once had to conduct a new programme in Japan having only learned it on the long flight to the country.

Such situations have happened more than once. The fact that a conductor works each week in a different country is, of course, great, but it is not as beautiful as it seems. In fact, it is quite difficult. Very often when I go somewhere, I see only the concert hall, the hotel and the airport and …that is all.

In September, I will be conducting in New Zealand. I will be met at the airport, taken to the hotel. I will probably pass a sleepless night because of the jet lag, and at 10 a.m. I will have to meet the orchestra, in a totally fit physical shape. We will perform Rachmaninov’s Symphonic Dances, one of the most difficult pieces for orchestra. I will have to find the strength and do my work at the highest level. I cannot come to New Zealand earlier because I have other projects.

A week after this concert, I will fly to the United States, to Seattle. It is on the other end of the planet. Then I will have concerts in Europe and in between them in Japan and, of course, I have my work in Astana. These are my plans for this fall. And in between the tours I have to make time to get visas. Sometimes you have to fly to other countries to get them. It is very good that just recently an Irish consulate opened in Almaty – before it was necessary to go to Moscow to get a visa. That sort of thing happens very often. This is the life of a musician.

Maybe it would be easier to have citizenship in another country, one easier to fly from.

Yes, I live like a global nomad. Today I am in one country; tomorrow, in another, the day after tomorrow in the third. Another hotel, another music hall, another orchestra. I am everywhere, and at the same time – nowhere. In the mornings I sometimes ask myself, “Where am I?” Maybe that is why the sense of homeland is so important for me. Here in Kazakhstan are my wife, my parents, my brother, relatives and friends. For me, visits to the motherland are a way of escaping and feeling the happiness of seeing family. Europeans do not communicate very closely; the cult of family is weak there. In my childhood, which was very happy and full of love, I was accustomed to family values. Maybe it comes with age or it is because I live mostly abroad, but I want my roots with home to be stronger.

Is there a future for classical music?

It is a good question, but I think that it should be discussed with culture experts. All factors and aspects of our current existence say that today the internet has replaced classical music and books. I love long flights, because on the plane I read avidly. My whole life, I’ve faced the problem of extra baggage, because I take dozens of books and scores when I travel. Today this is not an issue – I was given an electronic book. This format is a little bit unusual, because I am conservative by nature. I love Abai, Chekhov, Wilde, Hasek. I read a lot of historical and musical literature, biographies of composers and books about the eras they lived in. I am interested in that. There is a lot of information in English, German and French, less in Russian and very little in Kazakh.

I returned to my mother language after learning five foreign languages. Thanks to the two most important factors in my life, I started to learn Kazakh more deeply. Firstly, this is because of my spouse, Altynai. She can perfectly speak in mother language; she showed me its beauty and richness. The second factor is the “Abai” opera by Akhmet Zhubanov and Latif Khamidi. In the libretto, written by Mukhtar Auezov, the complex, Shakespearean language makes the music of the opera more precious.

When I staged “Abai” in Germany I was interested to read the opinion of Gerold Belger concerning the translations of Abai’s works to other languages. In his essays he proves that it is very difficult to translate to other languages the works of the Kazakh genius. The existing translations are partially rephrased. Sometimes translators avoid the interlinear translation and ad lib, and sometimes translators try to make a different poet from the Kazakh classic.

Some say being a musician is the most honest profession. What does that mean?

It is implied that there is no unheralded success. Musicians get used to painstaking work from a young age. Some play football on the street, some have to play piano for hours. It does not bring pleasure when you are young, but time passes and you cannot imagine your life without it. I never let myself do anything sloppily, unfairly; music is not a place for carelessness; playing 10 notes instead of the correct 100. If you undertrain, miss couple of notes – it will be heard.

A personal question to conclude: For a time, Kazakhstan’s musical circles were very concerned about if you would marry, and whom, and when. And now there is a charming lady accompanying you.

I met my future wife when I was 35 – quite a mature age. I have chosen the European approach – firstly to get on my feet, work, actualise myself and only after that to take the liberty of thinking about private life. As the years went by, I had become a sworn bachelor. Two years ago, an Italian company staged “Abai” in Almaty. My wife at the time worked in the State Academy Theatre of Opera and Ballet, and we met. We started to communicate; I fell in love and after half a year I proposed. Happily, she agreed and we married last summer. We try to spend time together whenever we can.

Tours are not stopping, and I am pretty happy with that. However, now I am married, so when I have a chance I go back to Kazakhstan. Last year, I was mostly in Europe and Japan. This year, it is far more distant areas – New Zealand, North America. Next year it will be tours in South America with the Berlin orchestra. Now I have my debut in Tokyo with the NHK orchestra – the most famous orchestra in Japan. I cannot wait to meet those remarkable collectives. Communication with interesting, talented people fills my life with energy, happiness, inspiration. I really appreciate that.