ASTANA – Around 200 people took part in the Super Sprint Triathlon Astana 2016 in the capital’s Central Park on July 31, according to the akimat’s (city administration) press service. Married couple from Shymkent Aleksander and Anastasiya Avtushko won both in men and women categories. 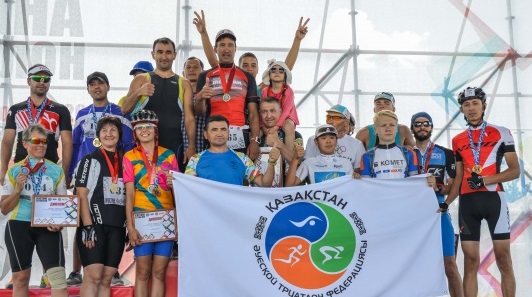 The winner among men, Aleksander finished in 54 minutes and 48 seconds. Anastasiya took 1 hour and 9 minutes to complete all the distances. Both are professional triathlon athletes.

“We have been engaged in triathlon for a long time. I have been [doing it] since 2002 and my wife since 2008. It was at a time when I was a child, unconsciously, friends called in, and then I found out what kind of sport it was and I liked it. Three types in one – very interesting, varied. Everything went very good, well organised. The weather is cool today, we brought it from the south,” said Avtushko.

According to a press release, participants had to be at least 18 years old and there were several categories for winners. The time of each contestant was being tracked with a special individual chip.

“I have been through all of that and I understand it is the kind of sport that requires both physical and tactical preparedness. It turned out that it is not easy to swim 350 metres. I have tried it myself, it is very difficult. I think that the sports festival went really good today, with perfect weather and a good mood. One hundred and forty-seven participants are amateurs and the other 27 are professional athletes in triathlon. I think it’s a great achievement and I want to thank everyone who came and participated,” said head of Astana Sport and Physical Culture Department Berik Marzhikpayev.

It was the first triathlon tournament in the capital and it is planned that it will be organised every year, said the press release.