The Kazakh Embassy to Russia and the National Geographic Russia magazine organised a Kazakhstan – Land of the Great Steppe street photo exhibition, reported the press service of the magazine. 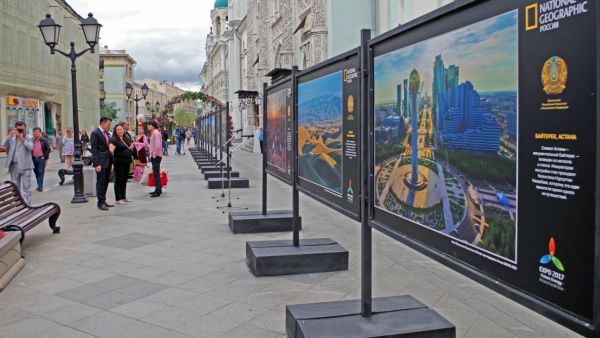 According to the press statement, the exhibition, opened as of July 21, stationed itself in the centre of the Russian capital, on Nickolskaya Street next to the Square of Revolution metro station. The exposition showcases more than 60 photos of picturesque natural landscapes of Kazakhstan, as well as significant coming events, such as the Winter Universiade in Almaty and EXPO in Astana, both to be held in 2017.

The exhibited photos have been created by the chief photographer of National Geographic Russia, Andrey Kamenev, who spend a month travelling the country.

Speaking at the opening ceremony, Editor-In-Chief of the magazine Andrey Palamarchuk noted that the month-long exhibition is also dedicated to the recently presented first issue of National Geographic Kazakhstan translated in the Kazakh language. He also emphasised that the exhibition is mostly focused on the coming EXPO 2017.

“The Future Energy exhibition topic is an up-to-date issue important for humanity and it also corresponds with the policy of the magazine, as our mission is to take care of the planet and inspire our readers to think about the common future of the world around us,” explained Palamarchuk.

Minister-Counsellor of the Kazakh Embassy to Russia Marat Syzdykov said the Kazakh landscape is a unique complex,  which incorporates natural wonders of Europe and Asia.  He also expressed his high hopes that the exhibition will attract more people to visit Kazakhstan.

The head Deputy of the Marketing, Public Relations and Tourism Department of the Astana EXPO 2017 National Company Dzhamilya Nurkaliyeva thanked National Geographic Russia and the Kazakh Embassy for the exhibition’s organisation and invited all to come to Astana in 2017 for the EXPO, announcing that tickets are already available to purchase.

The opening speeches were followed by a concert programme, prepared by the Chairman of the Kazakh Cultural Autonomy of Moscow, Damilya Tasmaganbetova.

The photo exhibition will be open until August 24.