Many Kazakh Traditions and Customs Still Relevant Today, While Some Fade Away

By Kamila Zhumabayeva in People on 20 August 2016

ASTANA – Kazakhs have preserved many traditions and customs that pervade life’s important moments, like birth, marriage, raising children, hospitality and celebration arrangements which have been passed to generations throughout the centuries. Many are no longer relevant in modern Kazakhstan, however, due to changes in ways of life and the influence of historic factors.

Paying deference and respect to an elder generation and having respect for wisdom is important for Kazakhs, notes bilu.kz, an online source about Kazakh traditions and customs. Knowing “zheti ata” (all ancestors [grandfathers] from seven generations) was every Kazakh’s duty.

“Following this tradition is relevant for boys and men who must know their zheti ata and have reverence of genealogical history. Me and my son, we try to keep this tradition by remembering the names of our ancestors by heart. I keep the list with their names and our genealogy next to the Koran,” said Rakhman Kaliyev.

Hospitality is another Kazakh hallmark, with a festive table set in a decorated yurt where everyone would sing songs, dance and play musical instruments. 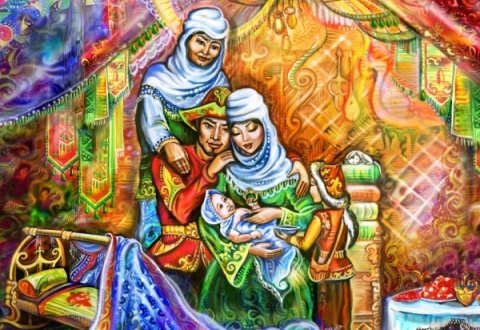 “When I lived with my grandmother, we had guests everyday. While some people would be arriving, some would be leaving,” he recalled.

Not giving tea or feeding a guest with one’s riches was great shame for a host.

“She would put everything that was best in the house on the table. She kept Indian tea, candies, raisins and cookies that were for special guests, while on a usual day we drank a cheaper mixed tea. Nowadays guests do not even necessarily need to be at home, but in a restaurant or a café,” said Kaliyev.

In addition to Kazakhs, these days Germans, Koreans, Russians, Tatars, Ukrainians, Uzbeks, Uyghurs and numerous other guests living in a big, multinational country gather at one table.

As one Kazakh proverb says, “a guest brings happiness to the house when he arrives.” Homeowners always tried to have their guest leave in a good mood and gave them fairing for the road, which is still present in modern days.

A Kazakh superstition says that a child will take happiness away from a house if it leaves while being upset. Even now, young guests are given delicious treats and small presents.

The Kazakh cuisine is renowned for meat dishes such as beshbarmak, manty, kazy and other national dishes and beverages like kumys (fermented mare’s milk), shubat (camel’s milk), airan (cold yogurt beverage) and tea.

“From ancient times, Kazakhs loved to drink tea with either milk or cream served after a traditional beshbarmak meal together with their families. Baursaks (fried yeast dough) are baked and various sweets are served with tea,” said mother and entrepreneur Gulnara Ashirbayeva in an earlier interview with the paper.

The tea drinking culture among Kazakhs is a tradition that brings family members together for dinner discussions. These days, however, the entrepreneur noted it is harder to find the time.

“Family matters and news are usually discussed during tea drinking together and our family is not an exception. Of course, we don’t always manage to gather in our modern days; each family member has their own priorities and preferences,” she said.

Raising children has its own traits, too. For example, an old notion indicates a baby is most prone to the influence of evil spirits who may send illnesses upon an infant or replace a child during the first 40 days of life. Therefore, no one except for the closest family could see a baby until 40 days had passed since birth. Many Kazakhs still follow this tradition.

For every boy, sundet (circumcision) is quite an important religious tradition because it appends him to a Muslim world and the Koran states the necessity of this rite, notes bilu.kz. As a rule, parents arrange toi (celebration) for this occasion and the child is rewarded with congratulations and many gifts.

These days, sundet is performed on 4-5year-old boys by clinics.

According to family customs, different people would handle the upbringing of each son. The eldest son would be sent to his grandparents, while the middle son remained with the parents and was pledged to later help the entire family. The youngest son would become a warrior and taught skills such as fencing and archery.

Some grandparents now look after all their grandchildren so the parents can build their careers.

“Me and my husband had to carry our joint family business, busy working until late night to provide for the family. My parents and my younger sister were raising, feeding and looking after our kids most years after they were born. Without them helping, we wouldn’t be able to get up on our feet and succeed,” said Ashirbayeva.

Eloquence and the ability to improvise and compose poems and songs out of hand were valued among Kazakhs and aitys (song competitions held between two poets and singers) are currently popular.

The people of one aul (village) were always like one big family. Neighbours and relatives tried to help if someone was in trouble. Never leaving loved ones and relatives in trouble and keeping the honour and dignity of one’s own family and genus was a rule for any Kazakh, notes the website.

“Me and my sister, we supported each other all the time even when our parents were alive. I teach that to my children, too, because family is the closest, most precious and important thing that we all have in our lives,” she said.

Women do not necessarily devote themselves only to family and children but attempt to achieve career heights on a par with men or even outrun them in educational level, earnings and status.

There are some customs which are no longer relevant in any form, like a Kazakh only considering the grandchild who was born from a son (and not a daughter).

In the past, girls married at around 13-14 and boys at 14-15, which in this century seriously breaks the law. Although the bride stealing tradition happens, in most cases with her consent, if done without consent it may turn into a criminal offence.

Similar traditions, that are predominantly no longer present, include amengerlik, when a widow had to marry one of her late husband’s brothers to resolve the issue of the father’s absence, according to psychological sciences candidate and Al-Farabi Kazakh National University Associate Professor Maira Kabakova.

“‘Dertkoshiru’(to remove disease) used in the case of one’s illness, gathering village residents get together to say ‘kosh!’ (Good-bye) and dispelling a disease has completely been forgotten as well,” wrote Kabakova.

The traditional Kazakh wedding that complies with the basic stages of a traditional wedding ceremony like viewing the bride, marriage portion (dowry), mutual gifting of affiances (engagements) and performing ceremonial songs (“Zhar-Zhar” and “Betashar”) has remained in modern days.

Felting, jewellery mastery, leather dressing, producing musical instruments and other national crafts have been revived as well, showing the young generation’s interest in the history of its nation.