NEW YORK – Kazakhstan has signed the Paris Climate Change Agreement. Foreign Minister of Kazakhstan Erlan Idrissov signed the document which was adopted at the December COP21 summit on Aug. 2 at UN Headquarters in New York. 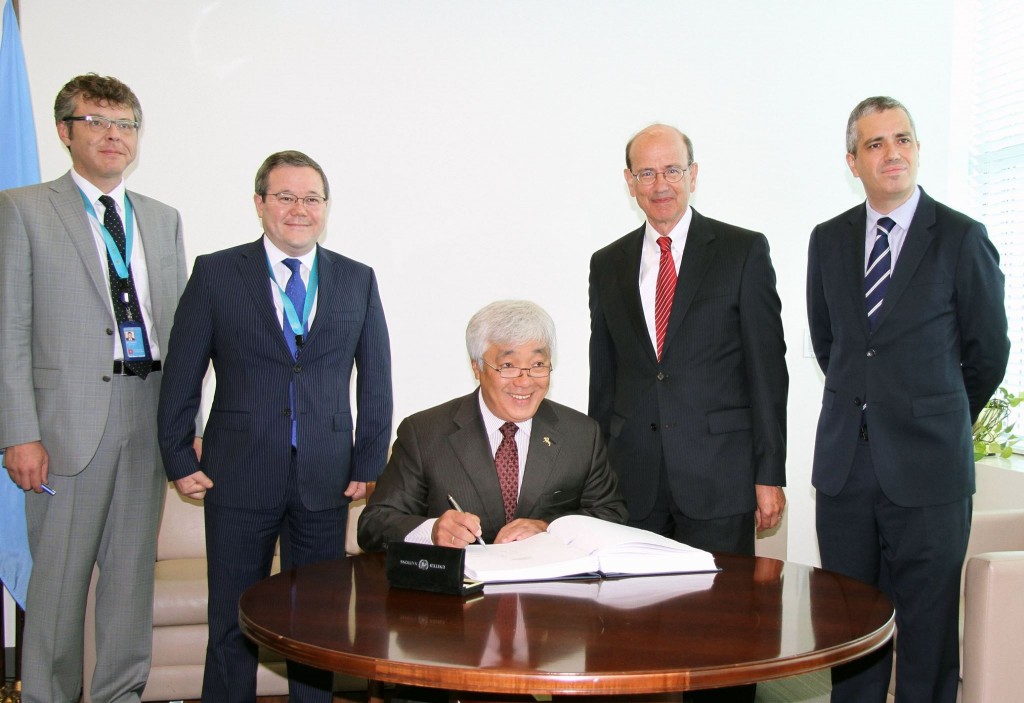 “The Paris Agreement is a global consensus document reflecting the world’s will to prevent climate change and to fight together against environmental degradation,” Idrissov said at the signing.

Most UN member states signed the agreement in April; Idrissov said technicalities delayed his country’s signing. The document will enter into force after the majority of countries responsible for global greenhouse gas emissions sign it.

“Much depends on its smooth ratification by the states,” Idrissov noted. “I hope that with the support of the government and the Parliament, Kazakhstan will be a model of prompt ratification of the agreement and will encourage the key signatory states to ensure its early entry into force.”

According to the press service of Kazakhstan’s Ministry of Foreign Affairs, addressing global climate change is a key condition for ensuring sustainable development, eliminating poverty and achieving socio-economic well-being for all countries. The Paris Agreement is an important symbol of the world community’s determination to put an end to environmental degradation. The signing comes as Kazakhstan prepares to host EXPO 2017, which will focus on sustainable energy for the future.

After the signing, Idrissov met with UN Secretary-General Ban Ki-moon, who congratulated Kazakhstan on its accession to such an important international document, as well as on the country’s election as a nonpermanent member of the UN Security Council for 2017–2018. They also discussed the fight against terrorism and violent extremism, as well as sustainable development and peace-building.

Idrissov emphasised Kazakhstan’s consistent support of international efforts to strengthen global security through the implementation of the UN Secretary-General’s Plan of Action to Prevent Violent Extremism, and the UN Global Counter-Terrorism Strategy, both at the regional and national levels. He also thanked Ban for his support of President of Kazakhstan Nursultan Nazarbayev’s initiative to convene the “Religions for Peace” High-Level Conversation on May 6 as part of the General Assembly and informed him of the results of the International Parliamentary Conference “Religions against Terrorism,” held the same month in Astana.

The sides also touched on possibilities for cooperation between Kazakhstan and the UN on green energy programmes. The secretary-general noted the importance of EXPO 2017 in Astana, the theme of which reflects the urgent need to develop green technologies across the globe.

On the same day, Idrissov took part in the UN Security Council open debates on children and armed conflict. In his statement, Idrissov outlined Kazakhstan’s principal position on the international problem and noted contributions made by Kazakhstan to solve it, in particular in Afghanistan, where the country has delivered humanitarian assistance programmes focusing on providing access to education and health care.