Kazakhstan and Poland: Years of Cooperation and Partnership

As President Nursultan Nazarbayev is scheduled to visit Warsaw on August 22-23, we interviewed Ambassador Extraordinary and Plenipotentiary of the Republic of Kazakhstan to the Republic of Poland Altay Abibullayev on the status and prospects of bilateral relations. 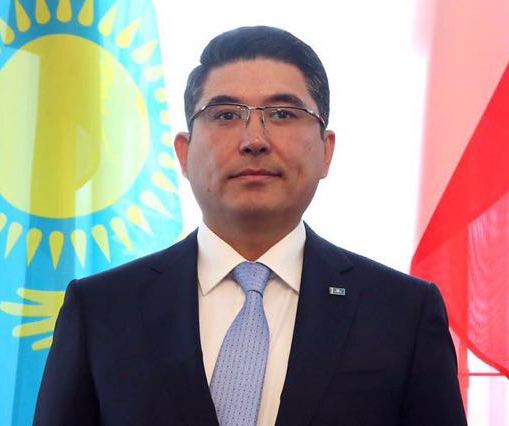 You had an opportunity to work in Kazakhstan’s Embassy in Warsaw since it was established in 1999. This May, by the decree of the head of state, you were appointed as the Ambassador of Kazakhstan to Poland. Can you name key milestones of Kazakh-Polish cooperation?

Some ties between Kazakhstan and Poland already existed in the 19th century and they were continued in the 20th century. The territory of Poland is nine times smaller than Kazakhstan, yet  we have a similar history in the desire to restore state independence. Modern diplomatic relations were established April 6, 1992, since then President of Kazakhstan Nursultan Nazarbayev visited Poland twice in 1997 and 2002 and Presidents of Poland Aleksander Kwaśniewski and Lech Kaczyński visited Astana in 1999 and 2007. Currently, 18 international agreements are in force between our two countries.

Over 25 years of interstate communications, the parties have exchanged mutual visits absolutely at all levels – from the highest to the regional and local.

During its independence, Kazakhstan has become the author of many international initiatives. Do they have support from Polish leadership and its public?

Kazakhstan and Poland have similar or practically the same approaches towards issues of regional and global security, addressing major challenges and threats of the modern time. The parties strive to support reciprocal international initiatives; for example, the official Warsaw supported main priorities of our country in chairing the OSCE in 2010 and our bid to host EXPO 2017 in Astana.

An agreement on Poland’s participation of in EXPO 2017 was signed within the framework of the Astana Economic Forum in May 2016. And I would like to note active involvement of Polish authorities in the organisation of their pavilion.

The initiatives of the head of state, such as the Plan of the Nation, the Kazakhstan 2050 development strategy, the state Nurly Zhol programme  and the Manifesto of the President of Kazakhstan “The World. The 21st Century”, all published in the Polish language, drew genuine interest among Polish circles. Poland highly appreciates our achievements in the international struggle for a nuclear weapons-free world and looks forward to close partnership for the implementation of our agenda during the non-permanent membership in the UNSC (United Nations Security Council) in 2017-2018.

It is clear that the spectrum of bilateral relations is wide. Can you name the key area of cooperation?

Indeed, the range of bilateral interactions with Poland is broad. Today, Kazakh-Polish ties are characterised by a great deal of mutual understanding and complementarity and lack of any political or economic problems; there is no single field our countries do not cooperate in. Our relations have been successfully developing in political, interregional, scientific, cultural-humanitarian, sport and other areas. It is natural that economy, investments, industrial-innovation and transit-transport spheres are priorities of our partnership with Poland.

Kazakhstan and Poland are not only large states in Central Asia and Central Europe respectively, but also economic leaders in their regions. Thus, Poland is the fifth largest economy in the European Union. In turn, Kazakhstan takes the second position in terms of its economic potential among the Eurasian Economic Union states.

For our country, Poland is one of the leading economic partners in Central and Eastern Europe (the 17th place among the world countries in terms of trade). At the same time, Kazakhstan accounts for approximately 70 percent of the Polish trade with Central Asian countries.

There is a need to take into account mutual interest in the joint use of the advanced transport-transit capacity of the two states. It is no secret that the shortest land route from Asia to Europe passes through the territories of Kazakhstan and Poland. It implements the One Belt, One Road initiative, uniting the projects for the creation of the Silk Road Economic Belt and Sea Silk Road of the 21st Century. Polish authorities are interested in launching a direct air link Warsaw-Astana.

What are the concrete parameters of trade and economic and investment cooperation between the countries?

According to the Agency of Statistics of the Republic of Kazakhstan, the bilateral trade in 2015 was $1.13 billion (export – $789.2 million, import – $340.8 million). The Ministry of Development of Poland estimates that this figure exceeded $1.35 billion (import – $948.1 million, export – $401.6 million). In the meantime, in accordance with the National Bank of Poland direct Polish investments in Kazakhstan reached $138.1 million and Kazakh investments to Poland – $13.6 million. About 200 companies with Polish capital are registered in our country.

It is well known that Polish diaspora live in Kazakhstan. What can you say about its role in the advancement of bilateral collaboration?

Today, Kazakhstan is home for about 34,000 ethnic Poles. They are a living thread, spiritually connecting and strengthening the friendship between our peoples. A Pole from Kazakhstan was elected to the Mazhilis of the Parliament of the Republic of Kazakhstan. Our citizens of Polish origin actively participate in the socio-political and economic life of the country. Among them there are well-known lawyers, scientists and business people. In order to revive the national language, culture and traditions of the Poles the Union of Poles of Kazakhstan is established which has branches represented in the Assembly of People of Kazakhstan in almost all regions of the country. The Polish language is taught in some universities and schools of Almaty, Kokshetau, Pavlodar and Taraz. Poland attaches great importance to contacts with compatriots in Kazakhstan. Therefore, this area of interaction is a significant part of Kazakh-Polish cooperation.

More than 770 Kazakh students are studying in Poland. Performances of Kazakh artists from the Astana Opera Theatre are scheduled for November 2016 in the Grand Theatre in Warsaw (Teatr wielki w Warszawie) and Wroclaw.

Fourteen years ago, the head of state paid an official visit to Poland. It has been nine years since the last visit of the Polish President to Astana. Has the time not come for another meeting between the leaders of our countries to give new impetus to Kazakh-Polish cooperation?

Heads of state can meet not only during mutual visits. So-called working meetings can be held as well. For example, the first meeting between President of Kazakhstan Nursultan Nazarbayev and President of Poland Andrzej Duda took place on the margins of the 70th anniversary session of the UN General Assembly in New York in September 2015. Following the meeting, the Kazakh leader was invited to visit Poland.

Thus, the state visit of President of Kazakhstan Nursultan Nazarbayev to Poland, the first in the history of our relations, is scheduled for Aug. 22-23, 2016. The very status of the visit emphasises and demonstrates Poland’s high esteem for our country and its leader.

It is very symbolic that the President of Kazakhstan will be the first world leader to visit Poland after the NATO Summit in Warsaw and the historic visit of Pope Francis in July 2016, as well as that Poland welcomes the first President of the state that is the initiator, co-founder and active member of the Eurasian Economic Union.

Hopefully, the visit will be dominated by economic and investment topics, the intensification of cooperation in agriculture, transport, transit, construction, chemistry, power engineering, public services and many other areas.

A large Kazakh-Polish economic forum with the participation of more than 500 Polish and Kazakh business people is expected to take place as part of the state visit.

We very much hope that extensive negotiations and the state visit programme will help to discuss in a friendly and welcoming atmosphere the whole range of bilateral relations and prospects for their further development. Experience shows that the development of bilateral cooperation is more effective if it is based on the agreements reached during high-level talks. This truth is valid in relation to interaction with any state, including Poland.