By Zhanna Shayakhmetova in People on 13 August 2016

ASTANA – Kazakh student Moldir Arapova is among the winners of an essay contest organised by the United Nations. 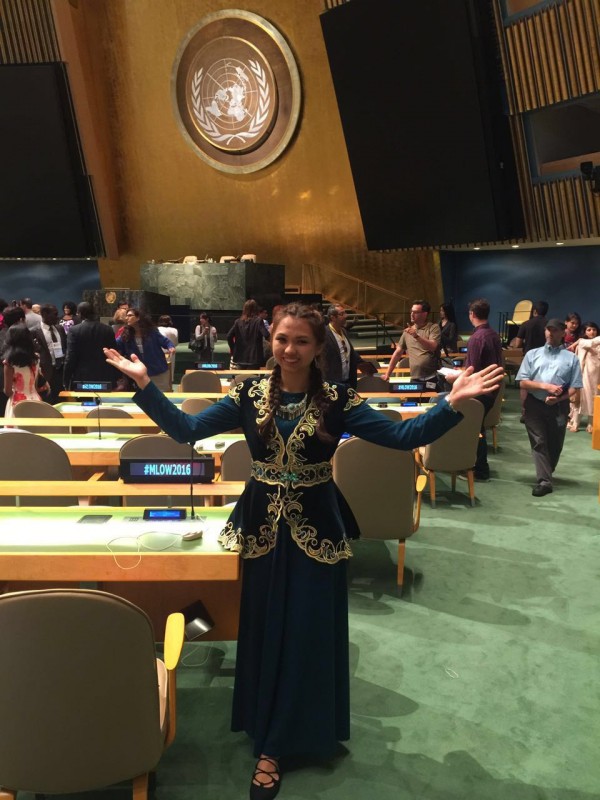 A jury selected sixty finalists out of the 3,600 participants who applied over three rounds. The finalists presented their reports to the UN General Assembly in New York. They were also able to communicate with guest lecturers and scientists during the UN meeting, Tengrinews.kz reports.

Arapova opened her remarks in the state language and presented her report in Chinese.

Twenty-one-year-old Arapova studied Chinese at the Beijing Language and Culture University for one year. Later, she received a scholarship and entered the Philosophy Department at Heilongjiang University in Harbin.

“I learned about the student contest on the internet and decided to try. It was necessary to submit an essay on the topic, ‘Many languages, One World’ by the end of March. I wrote an essay on how to learn the Chinese language, what difficulties I experienced and how I managed to overcome them,” she said.

Arapova touched upon the topic of creating the Silk Road Economic Belt and Marine Silk Road of the 21st Century projects in her two-minute presentation to the UN.

“If this project is implemented, the issues related to infrastructure, railways and gas ports will be resolved in many towns and villages. The distance between the states will be reduced and this can greatly affect and change the lives of billions of people. And aspects of political rapprochement, trade exchange, capital flow, cultural exchange, too, will increase international exchange and cooperation,” she said.