Jaxaliyeva: Never Too Late to Find Your Passion

By Zhanna Shayakhmetova in Sports on 2 August 2016

ASTANA – Twenty-six-year-old Kazakh golfer Jamila Jaxaliyeva was quickly named “truly one a kind” after her successful tournament performance at the 2015 Ladies European Tour. Yet she sees her mission as promoting the game of golf and becoming a sports ambassador in her own country. 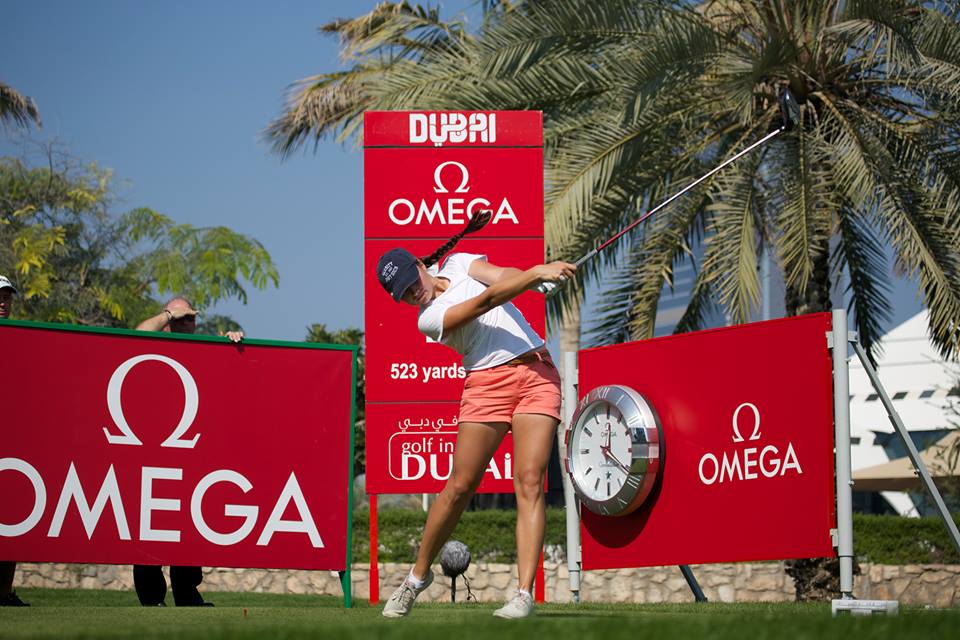 The Almaty-born Jaxaliyeva was introduced to golf later than most pros. At 15 she began playing under the guidance of her father Magzhan Jaxaliyev, an engineer by occupation.

She was pursuing a degree in mathematics at the University of Geneva when in 2012 she decided to focus entirely on sports. Her ultimate goal was to become a member of the top tier professional tour and have a chance at competing in the Olympics. “I was still an amateur at that time and felt like it was an extremely tough balance, both academics and athletics at a high level. I left the studies with a heavy heart but was excited to embark on my golf journey together with my father as a coach and my mother as a caddy. The first intermediate purpose was to play at the high-level amateur competitions and become a better player,” said Jaxaliyeva in an exclusive interview with The Astana Times.

She qualified that year for the match plays of the British Ladies Amateur, one of the most prestigious amateur tournaments, and recorded several strong top-3 finishes in Canada.

“It was important to gain my tour card on the LPGA Symetra Tour for 2014, which I eventually accomplished. My first year of competing on the professional tour did not turn out to be the way I hoped. I had to keep away from my clubs for a couple of months leading up to the season because I had to take care of my father. He was not able to travel with me for the next two years, which was a huge setback,” she said.

“In 2015, I decided to set up my main base in Kazakhstan again and start playing more events on the Ladies European Tour. My dad was finally able to travel with me and we recorded a third-place finish in Portugal and made the cut in a high ranked event in China. I finally gained a spot in the Rolex Women’s World Rankings and felt like I had a really good chance of qualifying for the Olympic Games. I started the 2016 season solidly on the Australian tour, but put too much pressure on myself in the big events. I was burnt out and did not perform good enough to get those few extra points needed for the games in Rio de Janeiro and unfortunately missed out on the qualification,” she added.

Golf is a very complex sport involving an entire array of variables, said Jaxaliyeva. It can be played by anyone on an amateur level, regardless of physical abilities and talents, but to become a professional there are a few things to seek.

“It is necessary to have a solid base in the swing mechanics. If you have major swing flaws, it will be a tough road up to the highest level of golf. Good technique is by far not enough. You need to have the dedication to practice for many hours a day until your body develops feel and touch for every kind of shot. The most important aspect in professional golf, though, is the mind. It takes a healthy central nervous system, confidence, toughness and ability to concentrate to become the best in the world,” she said.

Jaxaliyeva intends to play in the United States until September to keep her LPGA Symetra Tour Card for the 2017 season. She then plans to return to Europe and Asia to retain her European Tour card for the next season.

“I feel more motivated than ever to go for the win this year after having failed the Olympic qualifying process. My long-term goal would be to develop golf in Kazakhstan and all throughout the CIS (Commonwealth of Independent States) region. I would like to become an ambassador for the sport and inspire others to start golf,” she said.

She also noted the benefits of golf, as people have a completely wrong image of the sport which she aims to change.

“Golf is particularly great for juniors. It engages them physically, mentally and socially and teaches them great values. By the way, golf is also a great way to lose weight and prevent cardiac illnesses. One round of golf lasts five hours and can burn over 1,000 calories. Kazakhstan has a lot of gorgeous golf courses that are open for everyone. Almaty has three courses: Zhailau, Nurtau and Kyzyl Tu, a great and affordable golf club. Furthermore, there are courses in Astana, Kostanai and Shymkent and I am urging everyone to go and hit some balls,” said Jaxaliyeva.