By Anuar Abdrakhmanov in Sports on 20 August 2016

Kazakhstan champions FC Astana beat Belarus’ BATE Borisov 2-0 in the first match of the playoff round of the UEFA Europa League thanks to precise strikes in the second half from Junior Kabananga and Azat Nurgaliyev. 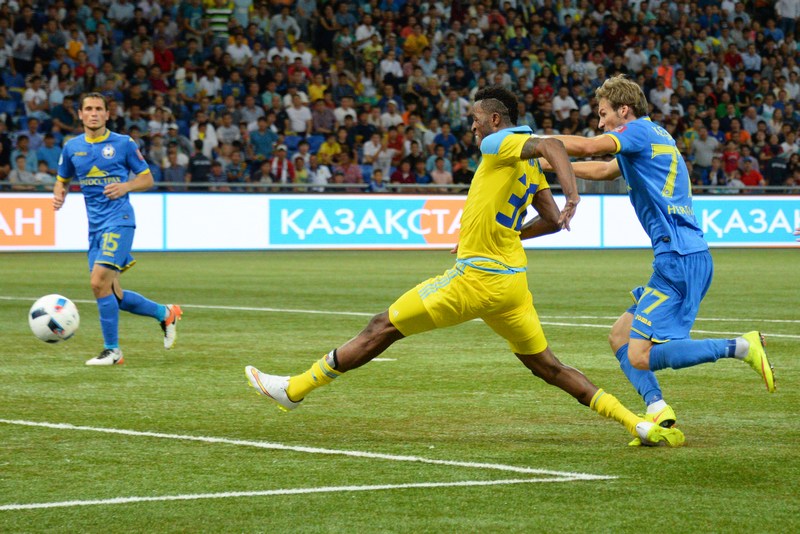 Before the match in Astana, Astana’s Bulgarian manager Stanimir Stoilov was in a difficult situation due to the disqualification of two key defenders, as Dmitry Shomko and Igor Shitov received red cards in the recent away Champions League match against Celtic. As a result, Abzal Beisebekov came out on the right flank while Yuri Logvinenko appeared on the right.

FC Astana took the initiative in their hands from the first minute and subsequently earned a few chances to score. In one play, Logvinenko crossed from the left but Kabananga failed to strike. Towards the end of the first half, Muzhikov’s dangerous strike ended in the hands of BATE’s goalkeeper Syarhey Vyeramko. The first half ended 0-0.

In the second half, the pressure on the visitors strengthened. With 62 minutes played, FC Astana’s attack created a dangerous situation near their opponent’s goal, but with great difficulty the Belarusian goalkeeper managed to break the passage.

Astana had better luck in the 70th minute. Nurgaliyev dribbled past BATE players and passed the ball to Kabananga, who with his left foot sent it into the opponent’s net for a score of 1-0.

The hosts doubled their lead in the 80th minute. Kabananga sent a long cross to find Patrick Twumasi a fraction of a second ahead of the keeper but passed the ball exactly to Nurgaliyev. A precise, classy strike from Nurgaliyev sent the ball into the visitors’ net, much to the joy of the home crowd in the stands. The match ended with a very comfortable advantage for FC Astana.

“[This was a] deserved victory for our team. The game was difficult and in the first half there were moments in which we were supposed to score but missed… BATE also showed good football. This was only part one, so nothing is over yet. There is a second game ahead which will be much more difficult. We have to play at a party even better if we want to go further,” said Stoilov after the match.

“I think the 2-0 was a good result. The main thing was not to miss and we didn’t. Let me be honest; it is a comfortable lead for us ahead of the second leg. At the same time, we cannot relax yet because this is football and anything can happen. In the second game you need to play in the same organised way, then I think success will come,” said Nurgaliyev.

The return match will take place on Aug. 25 at Borisov.