The Halyk Kazynasy Research Studies Institute of the Kazakh National Museum is now executing archaeological research on more than a dozen sites across the country which belong to different periods of time. 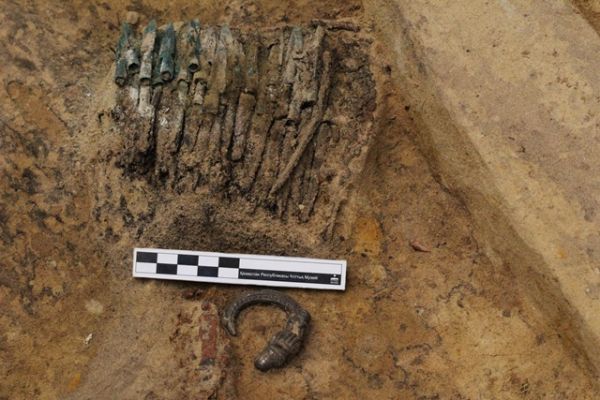 During the current research of the 6th-5th century BC burial complex Tortoba located in Kobda district in Aktobe region, archaeologists found intact tombs of Sarmatian warriors.

“The research studies of the Tortoba site, constructed to honour representatives of Sarmatian nobility, began in 2011. During the past five years, we have found seven burial sites and two sites meant for special rituals. All of the foundings belong to different time periods. During additional excavations of the burial ground, which represents an earthen mond of a total diameter of 50 metres and a height of 4.7 metres, new tombs of Sarmatian soldiers have been discovered,” said the head of exhibition Akan Ongaruly.

The discovered tombs for soldiers were erected hundreds of years ago after the main site was constructed. The warriors were buried with full amunition – archaeologists found bows and quivers with arrows as well as spears with iron arrowheads, sabers and daggers. The burial mound of the soldier found on the edge of the site revealed a quiver containing 184 arrows with bronze arrowheads.

Apart from weapons, the archaeologists also found traces of felt underlays, food and dishes. The ribs of a hourse were also found preserved on one of the wooden plates located next to a soldier.