By Kamila Zhumabayeva in International on 9 August 2016

ASTANA – Ambassador of Canada to Kazakhstan Shawn Steil shared in an Aug. 5 interview with The Astana Times thoughts on cooperation, bilateral trade and cultural similarities between the countries, personal impressions on Kazakhstan and past projects. 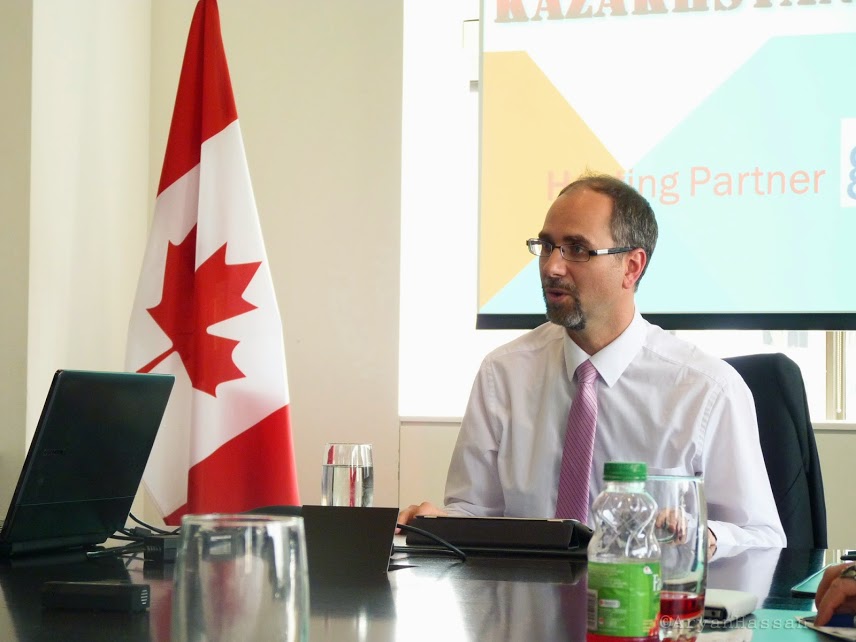 “Canada and Kazakhstan have a really strong, healthy relationship. … Part of it is based on the fact that despite being very far apart, we have great similarities in population density, similar climate, geography and natural resource base. So on the basis of those similarities, I think we found a really strong platform for cooperation,” Steil noted.

The two countries formally established diplomatic relations on April 10, 1992, shortly after Kazakhstan’s independence. According to Steil, since then a strong platform for cooperation has been set, high level visits were organised and exchanged at various levels took place in the recent years, including ministers of agriculture exchanging visits and signing a memorandum of understanding for cooperation in 2012.

In November 2013, Canadian Minister of Foreign Affairs John Baird visited Astana and concluded negotiations on a nuclear cooperation agreement that both countries ratified in 2014.

The ambassador notes that Kazakhstan surpassed Canada as the world’s largest producer of uranium in 2009, however, Kazakhstan’s uranium is being produced in cooperation with Canada.

“Our largest investor in Kazakhstan is Cameco Corporation – one of the world’s largest uranium companies and they a have a very strong partnership with KazAtomProm where they are mining the largest deposit of uranium in Kazakhstan together. Two months ago, they signed a new restructuring agreement which will increase the rate of uranium production that they are going to produce,” Steil notes.

The ambassador stresses this long-term 30-year agreement sets a solid footing for the countries’ nuclear cooperation.

“All of the framework is there and we have the opportunity now I think to exchange more processing technology and nuclear fuel generation technology. We are excited about that,” he added.

A few months ago, the Kazakhstan-Canada business council was launched. It is a private sector-led organisation that provides advice to companies and governments about ways of doing and promoting business between the two countries in mining, gas and agriculture fields.

Kazakhstan was recently elected as a non-permanent member of United Nations Security Council. The ambassador states that “the platform that the country has put forward is similar to what Canada would put forward,” referring to nuclear, energy, water and food security on which both countries have similar points of view.

“Now we are going to see much stronger cooperation on multilateral issues because of that shared platform. I think we have a lot to learn from Kazakhstan on how to run a campaign successfully, to get the seat on the UN Security Council,” Steil stresses.

He tells about what it means for countries like Kazakhstan and Canada that do not have strong military powers but have powerful neighbours and wish to play a role in international affairs.

“We can’t have an influence by ourselves without military and economic power to do it. We do have influence as a middle power, to provide a consensus, to breach the differences between other powers and to provide our negotiating power,” he explains.

According to Ambassador Steil, it can be seen that President Nursultan Nazarbayev has taken steps to position Kazakhstan to play that useful, moderating role in its own neighborhood.

The ambassador believes that kind of approach to international affairs is important at the present time, emphasising that there has to be a renewed emphasis on negotiation and multilateralism.

As he noted, Canada has a strong history of playing that role and Kazakhstan has the same commitment to that as well.

“We went from high point of bilateral trade I think in 2013-2014, almost 6 billion dollars in trade. A lot of that was oil and gas,” the ambassador shared.

It was oil purchased from Kazakhstan for refineries in Canada, which is strange, according to Steil, because Canada produces a lot of its own oil. It became their greatest source of trade because of shipping, another economic reasons.

“The latest statistics I have of 2015 where it’s dropped down significantly but still fairly solid, $117 million worth of Canadian exports and $524.9 million of Kazakhstan exports to Canada,” he says.

Steil assures that even if overall the statistics look like the trade dropped, a growth is still seen in agricultural machinery or machinery for the oil and gas and mining industry, consulting services, construction and construction materials.

“[Trade in] agricultural products, like cattle, genetics and meat is still increasing. We are relatively positive about that even though the numbers have dropped,” the ambassador continued.

It also can be seen that the investment is increasing with a large stock of Canadian direct investment in Kazakhstan, $4 billion, that continues to increase.

For the remainder of his term overall, Steil would like to see a broader bilateral relationship.

This includes broadening countries’ active engagement in specific sectors at the commercial level into areas such as space, broadening cooperation in fields such as education and doing more on governing issues.

The ambassador said that a focus was also made on building exchanges between government officials and researchers about improving government services. A lot of Canadian ideas and practices can be seen used in Kazakhstan currently.

“I want to see you fully support that. But I think more broadly we’d like to see more students and researches engaged and to that end we decided to host a conference on comparative studies essentially between Canada and Kazakhstan,” Steil said.

The first conference will be held Sept. 1 by the Library of the First President. Researchers and students were invited to submit their research papers and a dozen of submissions were received from all over the country and from abroad.

To celebrate the shared love of the two countries for winter sports, athletics and hockey, a friendly hockey match has been held every year for the last few years. Nearly 4,000 spectators came to see Canada versus Kazakhstan big friendly match at the Barys arena last March.

“By the time I arrived to Astana in 2014, the city was quite well developed, the architecture is stunning, the city is well organised, clean, easy to get around and that surprised me a little bit. … I didn’t imagine that the city could have grown so quickly and so well, so that was a surprise,” Steil notes.

Multilingualism, popularity of hockey, climate are among the similarities between the two countries. He believes that there is a similar approach to hospitality and treating one’s guests between the Kazakhs and the Canadians.

According to the ambassador, farmers come from Canada to Kazakhstan to do business or exchanges with Kazakhstan’s farmers.

“We are both multicultural countries with variety of religions, and great respect for different ethnicities and religions. These are points that are really strong of the Canadian national identity and I see that same identity with Kazakhstan people,” he noted.

Steil commented that the level of welcome he and his family have had since they arrived in Astana and Kazakhstan has been quite tremendous.

“I have such a fond admiration for the people of Kazakhstan because of how open they have been to us, how welcome we’ve been made to feel being here as family and diplomats kind of show how close we can be as two countries. I am grateful for that and it inspires me to work harder every day,” he concluded.