ASTANA – FC Astana was eliminated from the UEFA Champions League third qualifying round following a 1:2 defeat in the dying minutes of their return leg match against Celtic in Glasgow Aug. 3. A week earlier, the clubs drew 1:1 in Kazakhstan. 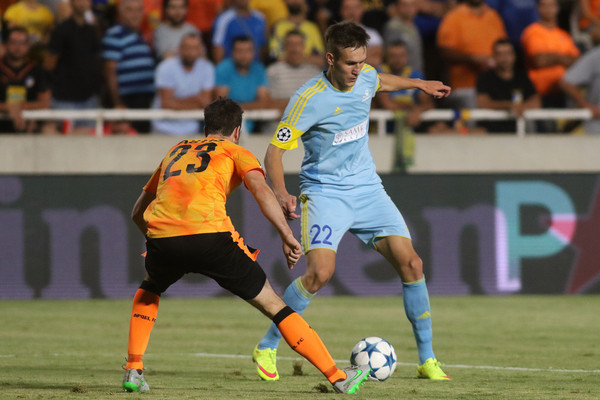 This was not a Kazakh club’s first encounter with Celtic. In 2013, in the playoff round of the Champions League, FC Shakhter Karaganda sensationally beat Celtic 2:0 at Astana Arena. In the return game, however, the Kazakh club allowed three goals and lost on aggregate.

Celtic’s second visit to the Kazakh capital again caused great interest and saw more than 29,000 spectators gather at Astana Arena July 27. Driven by the crowd, the home team immediately launched a number of promising attacks and were the first to score, with a header by Yuri Logvinenko in the 29th minute. The visiting Scots managed to tie in minute 78, but Astana players left confident, feeling they’d played the better game.

“We played well. Of course, some things in our game need to be improved: I mean using our chances; we had difficulty with that tonight. Indeed, we deserved to win but we were punished for one mistake, and its price was high. We are in for a difficult match in Scotland, and we will try to give all we have to win there,” Astana coach Stanimir Stoilov concluded at the post match press conference.

Ahead of the match in Glasgow, however, Astana’s chances seemed poor. The Scottish champion traditionally plays much better at home than away, and Astana would enter the game missing one of its key players, Serbian midfielder Nemanja Maksimovic, due to illness.

Early in the match, the Kazakhs tried to pressure their hosts at Celtic Park. The Scots quickly levelled the game but for a long time could not create truly threatening chances. Only in the 24th minute did Leigh Griffiths, who saved his team in the first match, try again to be a hero and from a distance almost hit the top corner of Kazakhstan’s net.

The Celtic players’ attempts to score grew sharper closer to the interval, and at the 45th minute their activity was rewarded when the referee punished Astana for a foul by Abzal Beysbekov in the penalty box. Griffiths did not miss his chance, and the penalty made it 1:0.

The second half began with more attacks by Celtic. Griffiths burst into the penalty area again and sent the ball toward the near top corner of the goal, but missed. A few minutes later, Celtic created more chaos in the visitors’ penalty box but the shot from an acute angle was saved this time by keeper Nenad Eric. Stoilov made his first substitution, replacing Azat Nurgaliyev, who did not have his best night in Glasgow, with Agim Ibraimi. This move paid off: In the 62nd minute, Celtic goalkeeper Craig Gordon stepped too far forward and the 28-year-old Macedonian striker sent the ball into an empty net from a long range to tie the match.

A little later, Astana’s Colombian midfielder Roger Cañas headed the ball into Celtic’s net, but the referee ruled offside. Toward the end of regular time the Scots regained confidence and greatly improved their control of the ball. In stoppage time, Astana’s Igor Shitov fouled Moussa Dembele in the penalty area and was punished with a yellow card, his second, and sent off the pitch. Celtic’s 20-year-old French striker then converted the penalty and sent the home crowd into raucous celebration over their 2:1 victory.

“I congratulate our rivals [on their progress into the next round]. We played well and gave all we had [to win this match]. This was a tough match. Of course, it is a shame to miss a goal in the last minutes. Ibraimi? I think he has not yet gained his optimal form. I decided to wait until the pace of the game would lessen, so that Agim [would have a better] chance,” commented Stoilov after the game.

FC Astana’s campaign to reach the UEFA Champions League for the second time has thus come to an end. Now, the team will try to impress in the Europa League, the continent’s second strongest international club competition. In the playoff round, the Kazakh champion will play Belarusian side BATE. In the last decade, BATE has played regularly in the UEFA Champions League against the likes of Barcelona and Bayern Munich, giving the upcoming post-Soviet confrontation something interesting to offer FC Astana fans.

The first match will be played Aug. 18 in Astana. The return leg will take place Aug. 25 in Barysau (Borisov).