By Kamila Zhumabayeva in International on 31 August 2016

ASTANA – A wide array of issues, including nuclear non-proliferation and disarmament and the physical protection of nuclear weapons were discussed at the Aug. 29 international conference Building a Nuclear-Weapons-Free World at the Palace of Independence in Astana. The conference also adopted The Astana Vision Declaration “From а Radioactive Haze to a Nuclear-Weapon-Free World.” 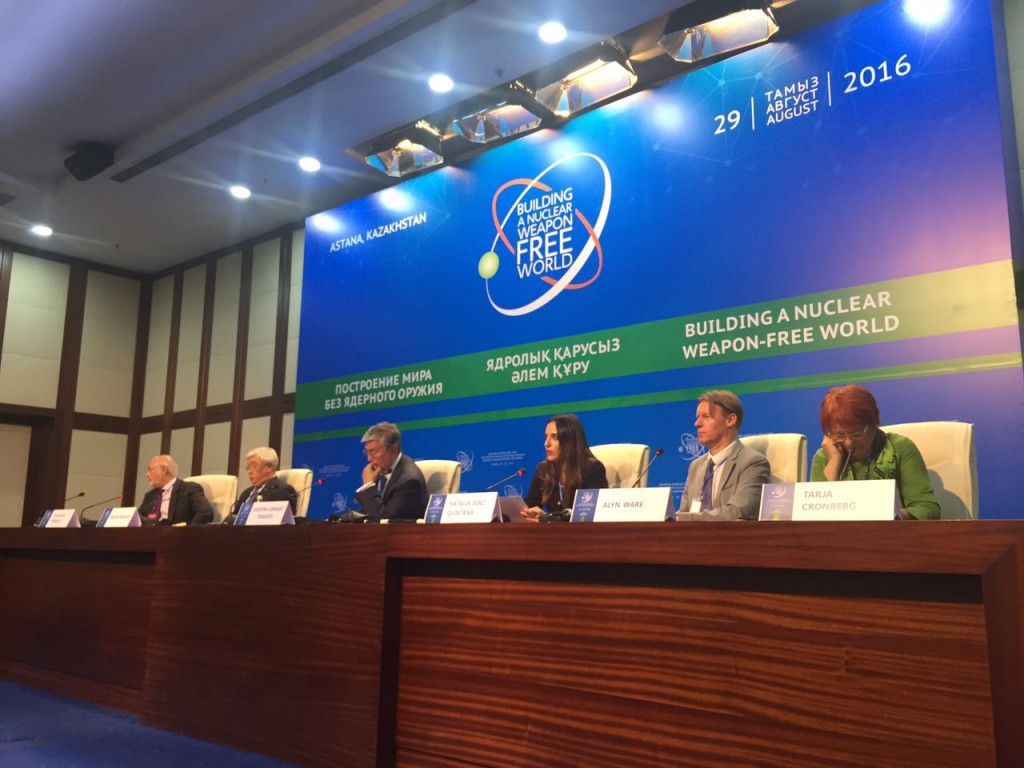 “The conference became an unprecedented success. I would like to highlight that the conference was of special significance for a very powerful and clear final document of 10 provisions, explaining an algorithm of actions for a more peaceful world. Different countries, including the Marshal Islands and Egypt, and international organisations worked on drafting the declaration,” Deputy Minister of Foreign Affairs Roman Vassilenko stressed during the press conference.

According to the deputy minister, the world community expresses their hope for Kazakhstan’s participation in the United Nations Security Council because the UN discusses adopting a resolution on banning all nuclear tests.

The Astana Vision Declaration adopted at the end of this conference commended the Kazakh nation and Nazarbayev’s leadership for voluntarily renouncing the world’s fourth largest nuclear arsenal, joining the Comprehensive Nuclear Test Ban Treaty (CTBT), establishing a Central Asian Nuclear Weapons-Free Zone and launching The ATOM Project to educate the world about the danger and long-term consequences of nuclear tests. 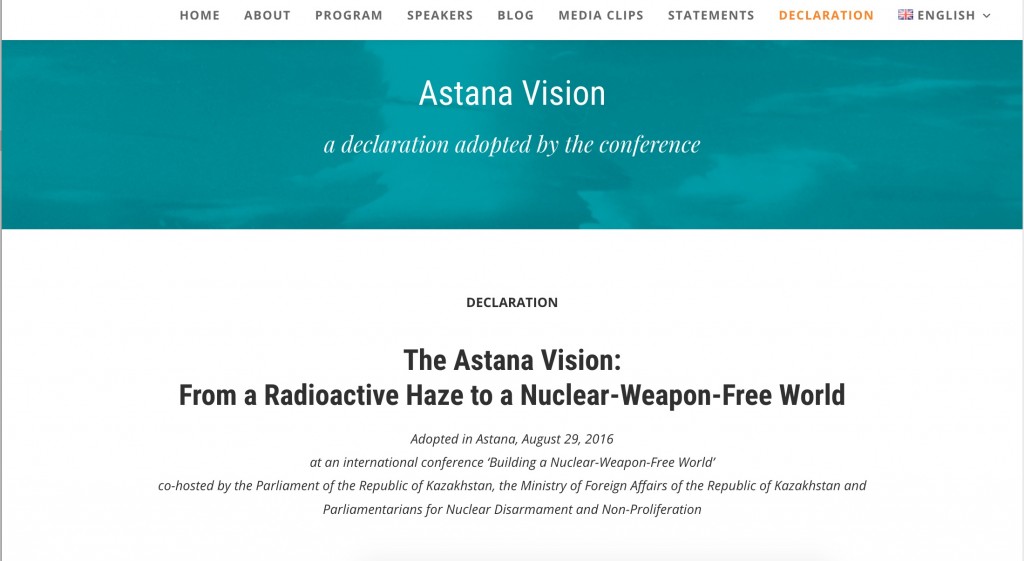 At a briefing after the event, Chairman of the Committee for International Relations, Defence and Security of the Senate of the Parliament of Kazakhstan Ikram Adyrbekov said the declaration clearly stipulates nuclear tests have to stop, all nuclear weapons must be banned and nuclear weapons-free zones promoted.

“Participants expressed the belief that every country will contribute to nuclear disarmament,” he added.

Promoting Kazakh President Nursultan Nazarbayev’s Manifesto “The World. The 21st Century” to end the plague of war, initiating the Universal Declaration for a Nuclear-Weapons-Free World adopted by the United Nations in 2015 and urging the UN to declare Aug. 29 as the International Day Against Nuclear Tests were among specific steps praised in the document.

“Where we move from here is to see how to accomplish that vision. It is my understanding that people have joined the conference of this nature to mark the International Day against Nuclear Tests and have the vision of the world free of nuclear weapons. We move with so much to be achieved and the milestone is how we are going to promote this idea as we march towards a world free of nuclear weapon,” Executive Secretary of the Preparatory Commission of the CTBTO Lassina Zerbo said.

An appeal for all nations to sign and ratify the CTBT so that it can enter into force, initiate negotiations and substantive discussions on the Non-Proliferation Treaty (NPT) and establish additional nuclear-weapons-free zones in the Middle East, North East Asia, Europe and the Arctic were among 10 points urged by The Astana Vision.

President Nazarbayev expressed his opinion on prospects for a nuclear-weapons-free zone in the Middle East similar to an experience in Central Asia.

“In Central Asia, we were able to take such a decision because there was peace and understanding among our countries, there were no conflicts. While the Middle East is in a state of war, there is no trust between states in the region, there is extremism, which evolves in terrorism,” Nazarbayev told CNBC Arabiya during a press briefing.

According to him, the work on trying to establish peace, solve existing conflicts and give people a chance to live in peace should be done before speaking about creating a nuclear-weapons-free zone in the war-torn region.

“After that, every single one will stand for giving up nuclear weapons, that’s my opinion,” he added.

“We have initiated the ATOM Project (Abolish Testing – Our Mission), the essence of which is to unite all people for the comprehensive ban of nuclear weapons… I am convinced that the world community will see value in it and will use these seven fundamental pillars of Kazakhstan’s experience for future movement towards a nuclear weapons-free world,” the President said when addressing the conference.

The ATOM Project’s online petition now has more than 300,000 signatures from over 100 countries.

Diseases, tragedies, death and pain that Honorary Ambassador of The ATOM Project Karipbek Kuyukov witnessed in his life urged him to campaign against nuclear testing. He calls upon all to sign the petition to put an end to all nuclear weapons and their development.

“The Cold War has ended but a new era of terrorism makes this call ever more urgent. Let us not give these terrorist madmen the chance to acquire any nuclear-weapons grade material to sow their carnage. This is a real danger and one that should spur nations holding or developing nuclear weapons to sit around the table of peace and negotiate a final, fair and secure end to all nuclear arsenals. The starting point would be for the remaining eight nations to sign the Nuclear Test Ban Treaty,” Kuyukov said. Aug. 29 marked the 25th anniversary since Kazakhstan shut down the nuclear test site in Semipalatinsk.

After hearing various suggestions at the plenary session, speaking before hundreds of diplomats, disarmament experts and world leaders at the conference, Nazarbayev also announced he would establish an international prize for contributions to global peace and nuclear disarmament.

“We are reminded that all evil needs to prosper is for good people to do nothing. We are here because Kazakhstan did not do nothing. It ended nuclear testing and the presence of nuclear weapons on its soil… We are all here because we know that despite progress, our world faces new and dangerous threats of a level that is serious and increasing. On behalf of the New Zealand chapter of Parliamentarians for Nuclear Non-Proliferation and Disarmament, we pledge to continue to work with you all towards a just, peaceful and nuclear free world,” Spokesperson on Disarmament, New Zealand Labour Party David Cunliffe stated.

“Kazakhstan also made a valuable contribution to the conclusion of an important agreement last year between Iran and the so-called P5+1 countries, known as the Joint Comprehensive Plan of Action. The IAEA is now verifying and monitoring Iran’s implementation of its nuclear-related commitments under the JCPOA. I believe the progress made on the Iran nuclear issue represents a real success for diplomacy. It demonstrates that even complex and challenging issues can be tackled effectively if all parties are committed to dialogue – not dialogue for its own sake, but dialogue aimed at achieving results,” Amano said in a video statement to the conference.