By Kamila Zhumabayeva in People on 29 August 2016

ASTANA – A family in Almaty is currently buying stationery, school uniforms and backpacks in fours as their quadruplet daughters prepare for first grade. 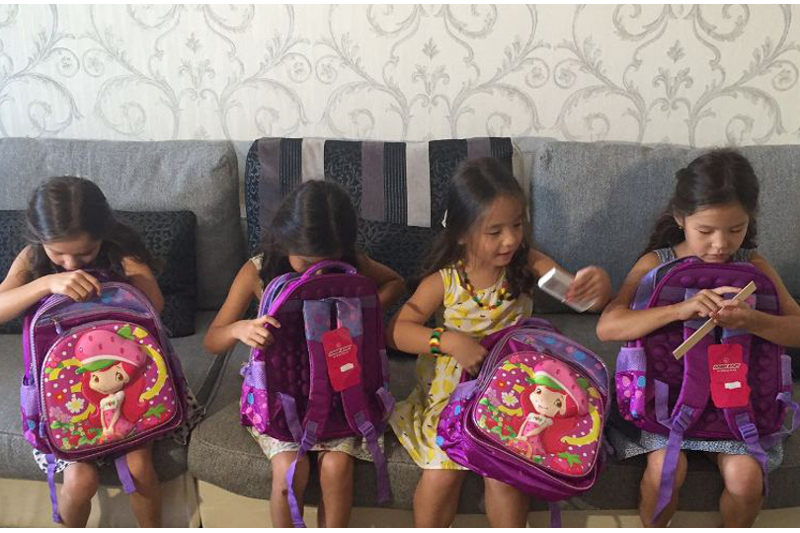 “Relatives helped us to take care of them in the beginning. Now they (the girls) want to help with the housework on their own. There were twins in my genus and triplets were among very distant ancestors of my husband, but we did not expect that we would have four kids born at once,” said their mother, Nazymgul Kuangan, according to almaty.tv.

The parents of the young sisters waited for the birth of their children for more than five years, choosing not to resort to medical assistance such as artificial fertilisation. Nevertheless, a caesarean section had to be performed during labour. When the babies were born, one weighed 900 grammes; the others, one and a half kilogrammes. They were named Begaisha, Gulaisha, Nuraisha and Zhanaisha.

“At first, so as not to confuse the girls we had to record the names on a piece of paper,” Kuangan told the television channel.

After six years, the family once again has a joyful event. While the girls are looking forward to Sept. 1 to sit down at their school desks, their parents are a bit worried.

“It is difficult to convey all the feelings that have covered us. If we have more boy quadruplets born, we will only be glad. We as parents have a great responsibility for our girls. We will have to be engaged in lessons with four children at the same time, but we are prepared,” said their father, Yessentai Kapar.

The girls are eagerly awaited at the school in Ainabulak micro district where the family lives. The teachers said they do not remember a similar situation and noted the children will study in the same class.

Although the family can independently cover all the school expenses, some people are still helping them to get the kids ready for the academic year. In doing so, they said, they are sharing in the happiness of one Almaty family.