Actor Explains Challenge of Playing the President, His Love of Movies

By Malika Orazgaliyeva in Culture on 9 August 2016

ASTANA – Actor Nurlan Alimzhanov, who played Kazakh President Nursultan Nazarbayev in the epic about the President’s life and has won Kazakhstan’s Zhas Tulpar award, discussed his cinema career and plans for the future with Kazakhstanskaya Pravda daily. 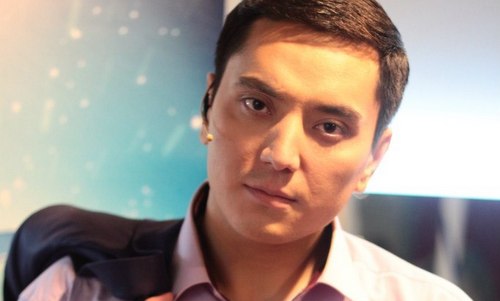 Alimzhanov wanted to become an actor since childhood, he said, having fallen in love with the art in his first theatrical role in “Marriage Proposal,” based on a piece by his father, Bayangali Alimzhanov.

In his second year at the Zhurgenov Academy in Almaty, Alimzhanov began to work at the Kazakh Youth Theatre, and took film roles and performed original songs. He would also play Ded Moroz, a traditional character embodying winter and the passage of the old year, at New Year corporate events, where he could get $50 for an evening. At that time, it was huge money for a poor student from a village.

Eventually, after switching between theatre, TV, cinema and music, Alimzhanov decided to focus on film.

“I come from Kenashy village in Kokshetau oblast. In our village, Indian and American movies were very popular. Bruce Lee, Jean-Claude Van Damme and Mithun Chakraborty were our idols. Trying to be like them, I started practicing taekwondo, especially after watching ‘Double Impact’ with Van Damme, I can seriously say that he was my teacher,” Alimzhanov said.

“I took naturally to the role in the epic, ‘The Way of the Leader.’ After the success of the first part, ‘The Sky of My Childhood,’ it was decided to shoot the subsequent sections. There was no question of who would play the young Nazarbayev. At the beginning of my career, I never thought that I could play the role of the President. It was destiny. I felt enormous responsibility,” the actor admitted.

According to Alimzhanov, from the beginning, he understood that if he concentrated on playing a president, the character would not work. Instead, he focused on embodying the worker who didn’t dream of becoming such a leader, but had a great thirst for knowledge and great determination.

“In the film, I just walk, step by step, to the top, which Nazarbayev did. In order to do this, I communicated with his friends and read everything I could find on him, especially memories of the President and his classmates,” Alimzhanov said.

Shooting on the second part of the film lasted nine months and required travel to Moscow, Ukraine, Finland, Estonia, Latvia, and Belarus. Most of the movie was filmed in Temirtau, in Karaganda oblast. Director Rustem Abdrashev and production designer Sabit Kurmanbekova recreated the image of the city in the mid-1950s and 1960s, turning Temirtau into one big set. After playing the role of Nazarbayev the steel worker, a job he held for nine years, Alimzhanov realised by what hard labour these workers earn their bread.

Before this pivotal role, Alimzhanov played the lead in a dozen other films.

“To perform well, I have to do a lot to work on myself, such as listen, watch, read, travel and meet different people. My first film was ‘Sin of Sholpan’ by Bolat Sharip, based on Magzhan Zhumabayev’s story. Then I did ‘Baksy,’ directed by Sergei Bodrov and Gulshad Omarova. The role of one of the brothers in the series ‘Agaiyndar’ by Akan Satayev brought me popularity,” the actor said.

In addition to his impressive appearance, tall, broad-shouldered Alimzhanov is a master of Kazakh literary language.

“My father gave me a taste for reading. … For me, literature, in terms of spiritual development, is more important than cinema. I love rereading Kazakh writers, such as Abai, Mukhtar Auezov, Gabit Musrepov, Sabit Mukanov and my father, of course. From Russia, I like Gogol and Dostoevsky. The book by British historian and traveller John Man, ‘Leadership Secrets of Genghis Khan,’ has become my table-book,” Alimzhanov said.

“Also, I am a cinema addict. I collect licensed disks, and do not miss a single movie, domestic or foreign. When friends suggest playing billiards, going to a restaurant or something else, I say ‘Let’s go to the movies.’ In the cinema, my soul relaxes. I learn from watching other actors. This is my hobby,” he added.

“In Kazakhstan, there are a lot of good directors and more as yet un-played historical roles, like Abylai Khan, Saken Seifullin and the leaders of the Alash Movement. In my heart, I cherish a dream to play at least some of them. Although no one has offered me such a role yet, I am preparing myself for them.”