SCO Transformation – Are There Any Prospects?

A month ago Tashkent hosted the SCO anniversary summit, which, on one hand, marked the 15th anniversary of the organisation and, on the other hand, officially confirmed the upcoming accession of India and Pakistan to the SCO. Currently, the SCO’s further development is one of the most important topics in the post-Soviet space. One day the SCO is called a global anti-American bloc, another day the Russian-Chinese alliance or the bloc of Chinese dominance in Eurasia, and so on. However, the reality is that the future of the SCO is so far as unclear as its potential transformation and qualitative change.

The SCO’s main area of focus has been and remains the former border of the Russian Empire and subsequently the Soviet Union with China. If we look at the history of Sino-Soviet relations and the relations of the post-Soviet countries with China, we can distinguish the following stages, which explain a lot in the creation of the SCO and its activities (see Table 1). 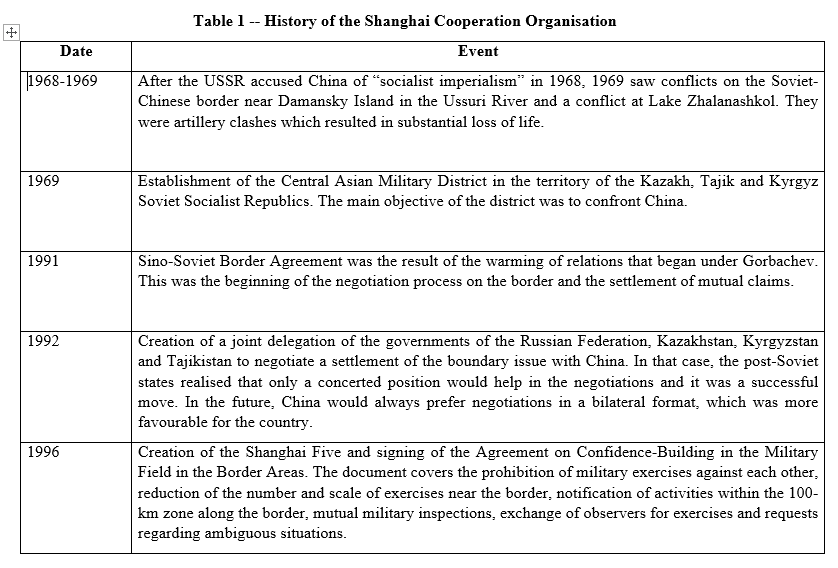 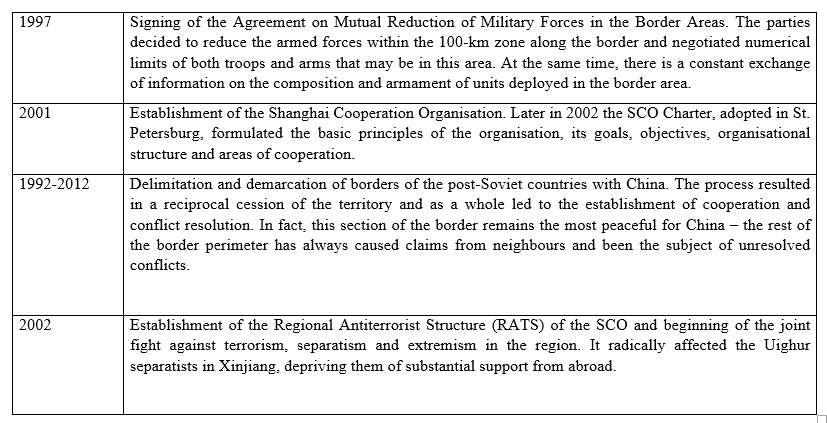 Overall, the task of the Shanghai Five and subsequently the SCO was to eliminate the consequences of the Sino-Soviet conflict and then build new relationships of the post-Soviet countries with China. The task consisted of the following sub-tasks: 1) termination of cold war; 2) reduction of troops along the border; 3) mutual inspections along the border; 4) settlement of territorial disputes; 5) creation of a new cross-border infrastructure; 6) joint fight against separatism and extremism; 7) cultural and academic exchanges.

In fact, the organisation implemented its minimal objective and its members need to simply maintain the status quo. However, who will let such a convenient dialogue and political platform be inactive now? That is why the SCO always faces the question – what next?

The stagnation scenario is characterised by the absence of qualitative changes in the organisation and functioning of the RATS and SCO University as the only real effective institutions of the organisation and carrying out periodic organisational, regular administrative, image-building and other representational activities, which, however, do not influence anything.

Nevertheless, this scenario suits neither Russia nor China, which are willing to use the SCO as a platform for their own purposes, bound with the common need to increase political influence. Therefore, they necessitate any form of the SCO’s reorganisation. In addition, there is always a question – why maintain the organisation, the mission of which is already completed and the main work of which can be determined by regular foreign policy routine?

Of the four elements, only transport cooperation was partially successful; all other attempts to advance economic collaboration to some extent were not supported by Russia. Thus, China launched separate projects – Asian Infrastructure Investment Bank, Silk Road Fund and Silk Road Economic Belt, which are already focused on bilateral cooperation and as a matter of fact are (except for the bank) purely Chinese initiatives. In fact, all of these Chinese projects with Central Asian countries will take place beyond the SCO; hence Russia cannot be engaged anyway.

In its turn, Russia placed an emphasis on political development of the SCO and offered its own scenario. The transformation into a political bloc scenario is characterised by the accession of new members, new dialogue partners, countries-observers and its candidates.

To a greater or lesser degree, this process is being implemented – to one extent or another the number of countries joining the SCO has been growing, although it is hampered by the absence of real content of the SCO’s work, except for counterterrorist and educational activities. There is also a threat that if countries – mutual opponents join the organisation, then because of the consensus decision-making operation, the SCO will be paralyzed. This relates to the accession of India and Pakistan. In this context India will mainly support Russia, and Pakistan – China, which again will lead to some sort of confrontation inside the organisation.

Finally, I personally propose the SCO return to its origins and the organisation’s subject of activities; in other words, to the former Soviet-Chinese border and development of cross-border cooperation. Obviously, these projects are not global; but, nevertheless, they will be really effective and allow a wide range of businesses of all countries to involve into cooperation. Even if initial collaboration is not so large, however, it is better than doing nothing.

The cross-border cooperation scenario is characterised by: 1) creating cross-border special economic zones (SEZs), which include not only trade, but also the production of certain types of goods; 2) facilitating a visa regime for tourists and residents of cross-border regions; 3) facilitating the regime for tourists staying in border areas; 4) establishing new transport corridors and improving old ones. It is always better to double the number of roads and railways – this applies also to gas and oil pipelines; 5) increasing the number of border cross points and furnishing their equipment with modern scanners; 6) increasing transport ground transit; 7) ensuring the coherence of economic development of cross-border regions through the consideration of development programmes of neighbouring states.

The following table comprises examples of cross-border cooperation. As you can see, Kazakhstan demonstrates the highest level of cross-border cooperation and consistently expands the cargo passage through its border with China, building long-term plans. For instance, as Russian researcher Ivan Zuenko writes in his article “How the Chinese Silk Road will Pass and Who will Benefit from It” on the Carnegie Moscow Centre website: “The 2012-2014 analysis of customs statistics shows that the transit from Asia to Europe through Kazakhstan already exceeds the total transit through Eastern Siberia and the Far East. From 2012 to 2014, the transit from Eastern Asia (primarily from China) to Europe through Kazakhstan increased by more than two times, from 39,100 to 91,500 tonnes. The transit through Eastern Siberia in total increased by 4,400 tonnes (from 68,700 to 73,100 tonnes) and through the Far East by 800 tonnes (from 4,600 to 5,400 tonnes).”

Kazakhstan Temir Zholy, the Kazakh national railway company, forecasts that in 2016 the transit through our country via route China-Europe-China will account for approximately 510 trains or 40,000 containers, which is 40 times more than in 2011. Even though these figures are not comparable with sea shipments, nonetheless they have their own economic effect and will occupy their transit niche in the future. 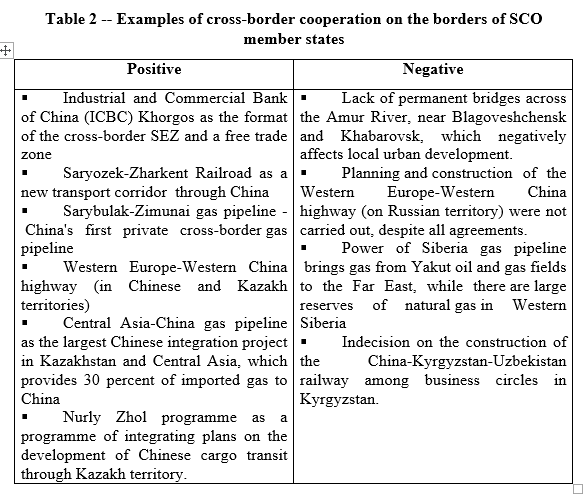 I believe SCO member states should embrace Kazakhstan’s positive experience. If new transport corridors, checkpoints and SEZs are created in Russia, Kyrgyzstan and Tajikistan, it will significantly improve the cooperation between these countries and China and at the same time strengthen the SCO. The organisation will have a chance to develop and achieve certain results, which may be the beginning of even more extensive projects. Meanwhile, we should make an attempt to carry out the following projects:

To sum up, one can draw the following conclusions:

The author is a political analyst. This article is based on the author’s speech at the international forum On the Second Track – The Role of Civil Society and Public Diplomacy in the Further Development and Expansion of the Shanghai Cooperation Organisation (SCO) held earlier this year in Sochi.