By Kamila Zhumabayeva in Business on 5 July 2016

ASTANA – President Nursultan Nazarbayev visited June 30 and was introduced to the work at the capital’s transport and logistics hub, GLB home construction factory, Tulpar  Talgo factory, Olympic Water Sports centre and Forte Bank’s new building.  He launched a number of projects during a teleconference dedicated to the industrialisation outcome summary for the first half of 2016 on July 1. 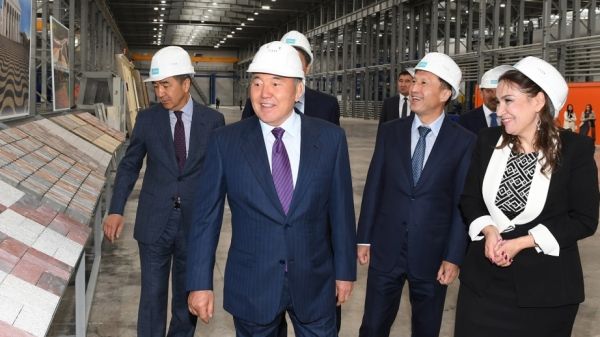 The head of state began with the hub’s performance and simplified customs processing zone. He stressed the key role of the transport and logistics services market in the country’s industrial development.

“Representatives of foreign economic activity were previously issuing documents in three days, while this procedure is simplified here, taking one to three hours. We have built a logistics centre on goods processing in Astana which is already loaded by 70 percent, the largest not just in Central Asia but also in Caucasus and Siberia. This is a big deal in our industrial and infrastructural development programme,” said Nazarbayev.

The President was introduced to the work at the rebar and forming plants and examined the exhibition pavilion at the GLB factory. He noted the need for broad use of the enterprise’s production capacities in implementing the state housing programme. He also commented on the plant’s social significance, as it provides jobs for about 1,200 people. 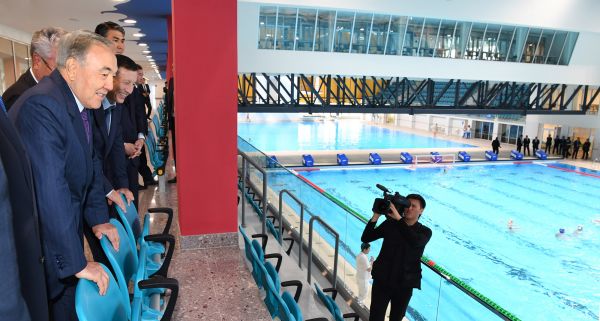 Nazarbayev was introduced to the work at Tulpar Talgo factory and examined one of the passenger wagons. He was updated on the growth rate of the railway mechanical engineering sector and speed traffic development programme. The President noted the need to further increase domestic production for enhancing the efficiency of the country’s transport system.

“I have visited a number of Astana’s facilities created during the industrial development programme… Not only do we produce electric and diesel locomotives for the rail industry, but we also create modern cargo and passenger wagons. They are now used on passenger speed trains to various destinations. On the whole, the industrial park of Astana is developing very dynamically. We attract investment to this technology park and create conditions for the successful implementing of projects. Thanks to this, the city’s economy rises each year and the income to the budget increases,” said Nazarbayev.

The head of state concluded his tour of the capital by stopping at the Olympic water sports centre in the multifunctional Ice Palace. Viewing the young athletes’ show on springboard, water polo and synchronised and speed swimming enabled him to fully assess the centre’s capabilities. 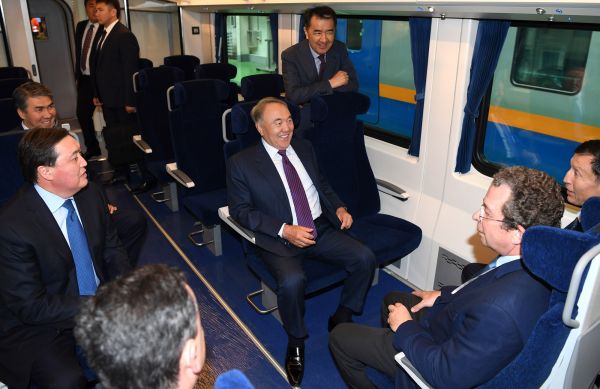 The President continued the conference by launching production of K5 ecological class motor fuel in Aksai, West Kazakhstan region, reported BNews.kz. He noted the project was implemented with the support of the Development Bank of Kazakhstan.

“We will be producing over 200,000 tonnes of high quality petrol, which will practically eliminate the region’s dependence on fuel and lubricants import,” he said.

“A factory for producing wheel sets is a completely new and necessary product that we have not produced in Kazakhstan. The main thing is that a very big percent of localisation, our metal and cast iron, is being used there and our developing railway industry plays an exceptional role. Kazakhstan is becoming an East to West transportation hub. I congratulate you!” he said, according to Zakon.kz.

Enterprise representatives noted the factory will produce up to 20,000 wheel pairs and 42,000 railway axles per year. The greenhouse created 70 jobs, with products to be exported to Russia, added the website.

The manufacturing capacity of the oil production complex is 120,000 tonnes of product per year, which will fully meet Kazakhstan’s demand in fats. The facility created 750 new jobs.