Kazakhstan’s GDP Grows Slightly in First Half of 2016

By Zhanna Shayakhmetova in Business on 21 July 2016 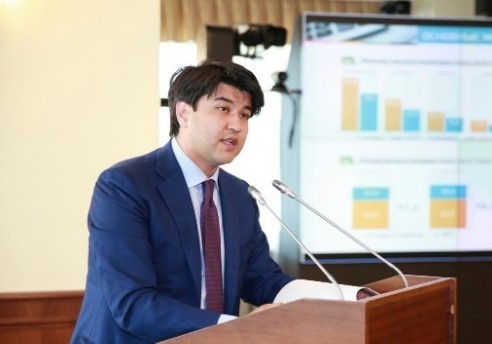 ASTANA – Kazakhstan’s economy is still growing due to timely anti-crisis measures taken by the government and the National Bank, according to Minister of National Economy Kuandyk Bishimbayev. From January to June 2016, gross domestic product grew by 0.1 percent compared with the corresponding period in 2015, he announced during a governmental meeting dedicated to the socio-economic development of the country and headed by Prime Minister of Kazakhstan Karim Massimov.

According to Bishimbayev, the volume of investment in fixed assets increased by 8.5 percent as a result of projects initiated through the Nurly Zhol infrastructure development programme and the State Programme for Accelerated Industrial and Innovative Development (SPAIID). The highest investment growth, 12.8 percent, was observed in agriculture, with investment in real estate transactions growing by 5.4 percent, reported the Prime Minister’s press service.

Kazakhstan’s international reserves totalled $96.2 billion on July 1, 2016, and have increased 5.2 percent this year. National Fund assets in foreign currency grew by 3.5 percent to $65.7 billion. Gold and foreign assets of the National Bank increased 9.4 percent to $30.5 billion.

“In the first half of 2016, the short-term economic indicator was 99.3 percent compared to 99 percent in January to May of the current year,” he said.

From January to May 2016, due to the decline in prices for oil and metals, the volume of exports decreased 31.8 percent to $13.7 billion. Imports declined by 27 percent to $9.2 billion. As a result, foreign trade turnover decreased by 29.9 percent to $23 billion. However, the foreign trade balance remained positive at the level of $4.5 billion.

Social sphere indicators remain stable. The average monthly nominal salary amounted to 133,500 tenge (US$392) and increased by 9.9 percent in nominal terms in the first six months of 2016.

Inflation has remained at 4.6 percent since the beginning of the year (June 2016 compared to December 2015). The rise in the cost of food products by 5 percent contributed to inflation on account of 1.85 percent. Prices of non-food products increased by 4.7 percent and paid services by 4.1 percent.

The volume of construction work increased by 6.6 percent due to increasing rates of building industrial facilities and residential buildings. Agricultural gross output increased by 2.7 percent due to increased livestock production. Lending rates are also growing again. From January to May 2016, second-tier bank loans amounted to 3.7 trillion tenge (US$10.8 million), 6.7 percent higher than in the same period last year.

A number of large objects have been built in the regions. The Zhezkazgan-Beineu and Arkalyk-Shubarkol railroads have been completed in the Karaganda region as well as the Beineu-Bozoi-Shymkent gas pipeline and the Zhezkazgan-Saksaulsk railroad in the Kyzylorda region. The construction of the Asyl Arman residential complex in the Karasai district and the reconstruction of the Almaty-Kapshagai, Almaty-Ust-Kamenogorsk and Almaty-Khorgos roads have been completed in the Almaty region.