ASTANA – Kazakh social networks exploded in June from the reposts, comments and likes for a video posted by Kazakh street artist Pasha Cas. The video presents his new work, “This is Silence,” the young man’s manifesto. 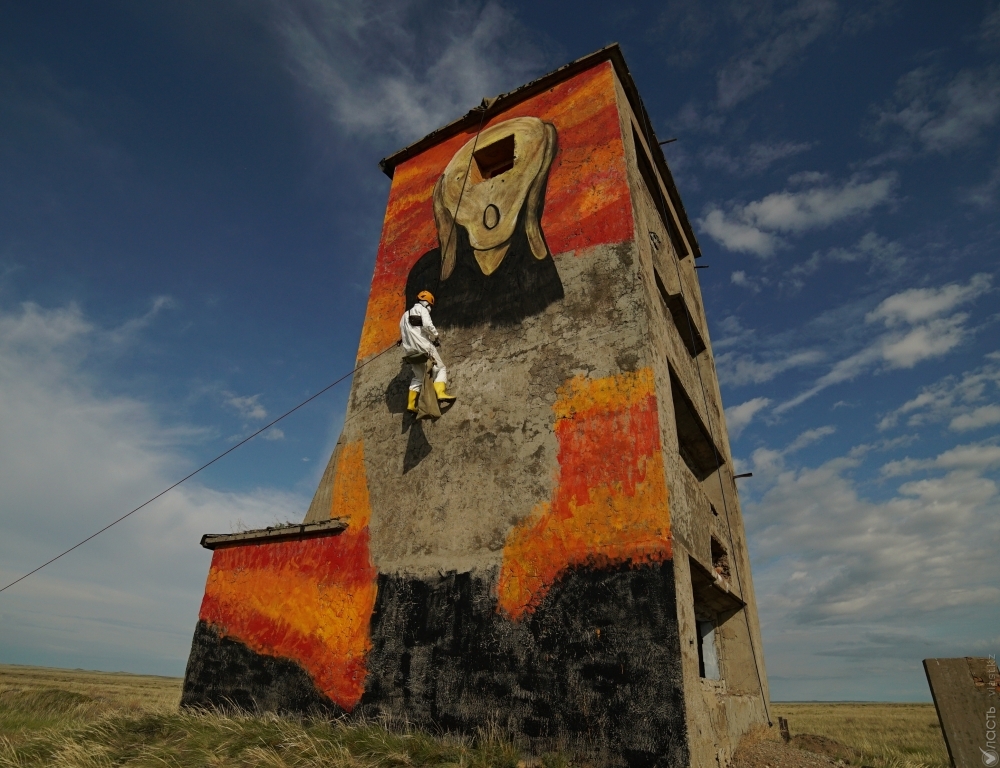 Pasha Cas working on “This is Silence.” Photo: vlast.kz

“This is Silence” is a giant reproduction of Edvard Munch’s “Scream” series character on one of the objects at Semipalatinsk Nuclear Test Site. The video starts with the artist painting dates connected to Hiroshima and Nagasaki and Semipalatinsk Test Site. At the same time a narrator, who is the artist himself, relates the horrifying numbers in the history of nuclear tests.

“Since 1949, 616 nuclear bombs were detonated at the Semipalatinsk Test Site and 1.5 million people were affected. In the 21st century, Kazakhstan turned into a nuclear waste dump. The state continued to experiment on people. It is Silence. Horror. Crime. Despair,” says Cas in the video.

“This is Silence” draws people’s attention to the problem of nuclear waste disposal on the Kazakh territory, said the video’s description. Under law, Kazakhstan is prohibited from importing any foreign nuclear waste, and what the video refers to is the residual effects of Soviet nuclear weapon testing conducted at the test site in 1949-1989. President Nursultan Nazarbayev officially closed the test site on Aug. 29, 1991, and the Kazakh government has since worked to eliminate the consequences of nuclear testing.

For the past several months, Cas’ name has been all over the news in Kazakhstan. His controversial works, mainly dedicated to social and environmental issues, do not leave anyone indifferent. 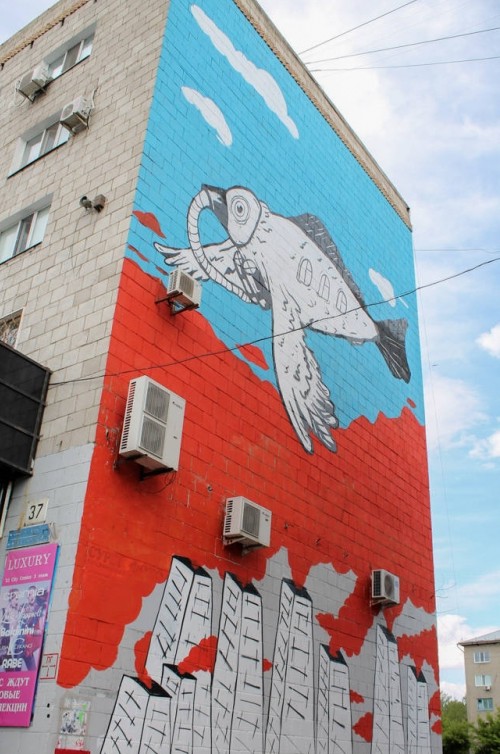 In early June, the artist created another statement on a house in Pavlodar. The work shows red smoke coming from the plant pipes and a giant mutant bird-fish in a gas mask flying above it. The art was completed to highlight the region’s environmental issues and the harm caused by the facilities.

“The city has four of the most powerful factories – aluminium, chemical, petrochemical and electrolysis. Who owns these factories? It seems to me these plants do not belong to the people, they belong to robots. They are destroying everything that is alive – water, air, land and most importantly – people. The city with a population of 300,000 has 2,000 new cancer diseases annually. And it is official statistics. People die in bunches,” wrote Cas.

In April, Temirtau, known for its ecological issues due to production at the Arcelor Mittal plant, also received a giant artwork on one of its buildings. Henri Matisse’s famous “Dance” painting inspired a mural showing people dancing around the steaming pipe.

Unlike many street artists, Cas does not hide his face under a mask. He was born in Almaty and educated to be an architect. He started with graffiti in 2010, but soon transferred to street art. The genre has a conceptual and meaningful part, while graffiti is more about advancing painting technique, he said. 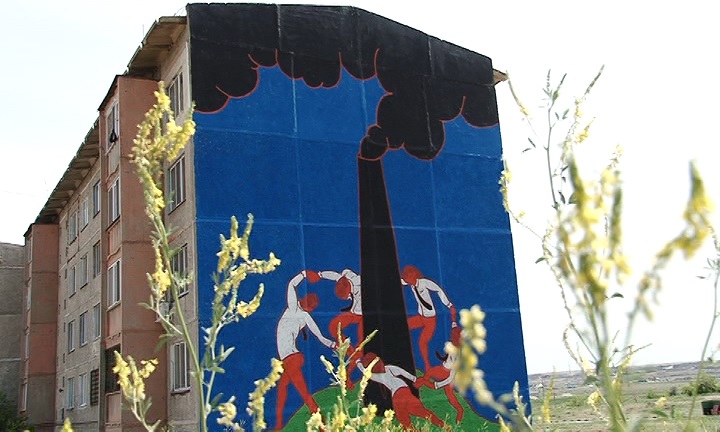 One of Cas’ most famous early works was the “No One Cares” billboard, where he noted how many people in Kazakhstan died from suicide in 2012 and wrote “no one cares” in a rude manner on the giant placard. He also hung a mannequin dressed in human clothes on the billboard in an effort to attract attention to the problem of suicide in the country. At the time, that act was shocking for people.

Last year, on one of the old houses which was supposed to be demolished, Cas created a banner reading “Are you sure you want to delete that item?” The message was in personal desktop computer style with the buttons “Yes,” “No” and “Cancel.”

Cas’ name has been discussed this year in the Russian media. He often visits Saint Petersburg and in February painted Mona Lisa disguised as a street janitor.

“I wanted to show people that they should look for something good in every person. For example, in Saint Petersburg’s janitor,” said Cas in an interview with a Russian TV channel.