By Anuar Abdrakhmanov in Sports on 12 July 2016

ASTANA – For Kazakh football clubs, the time has come again to test themselves in the qualifying rounds of the European club tournaments. 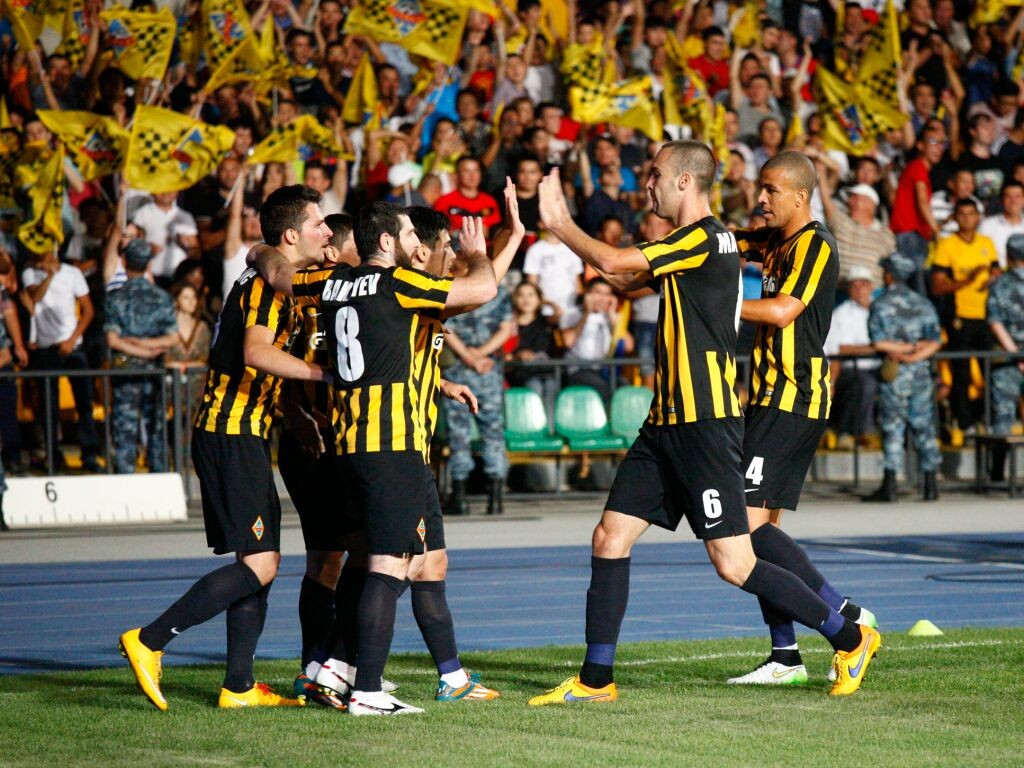 Unfortunately, the beginning of the 2016-2018 season turned  out quite poorly. Last week, three Kazakh clubs played the return legs of their Europa League rivalries. FK Aktobe tied at home 1-1 but lost to Hungary’s MTK 0-2 in an away game. FC Ordabasy Shymkent gave way to Serbia’s FC Čukarički 3-0 at an away game and 3:3 at home.

Only FC Kairat Almaty made it to the next round of the tournament without any problems. In the second leg of Europa League’s first qualifying round, Kairat trounced Albania’s Teuta Durres, 5:0. A week earlier, the Kazakh club won in Albania thanks to the only goal scored by Andrey Arshavin. Therefore, in the return game, Kairat, which considerably strengthened its lineup before the start of the European season, looked to be an undisputed favourite.

In the early minutes of the match in Almaty, the Albanian team tried to keep the ball. While they may have succeeded in this way, they failed in attempts to create danger in front of Vladimir Plotnikov’s goal.

Kairat responded with more efficiency. Shpëtim Moçka reacted to a pass from Islambek Kuat in the penalty area, then Isael and Arshavin tested Teuta’s goalkeeper from a distance. In the 27th minute, Mikhail Bakayev ran into the penalty area and played a beautiful combination with Gerard Gohou, rolling the ball to the Ivorian who calmly sent it into an empty net for a 1:0 score.

A few minutes later, Arshavin and Isael wasted good chances to increase the score. The former, beating several defenders, struck towards the goal that was blocked by defenders, while the latter’s strike was neutralised by the goalkeeper. The remaining time of the first half passed in constant attacks by Kairat, with only the goalkeeper saving them. In the second minute of the added time, however, Bakaev effectively completed an attack combination through the middle of the penalty area and struck the goal from Arshavin’s assist to make it 2-0.

After the break, the Kairat players continued their pressure on the guests and kept breaking through the opponent’s defences. In the 61st minute Bauyrzhan Islamkhan assisted Gohou, helping him score his second goal of the night for a score of 3-0. The striker was soon substituted by Léandre Tawamba and the Cameroonian extended the lead to four goals following a corner kick. Arshavin was then replaced by Bauyrzhan Turysbek. This change also brought its fruits, as minutes after entering the pitch he took Tawamba’s strike into the Mochka’s net, making the final score 5-0.

The Almaty club prevailed with a combined score of 6-0, the largest margin of victory for any Kazakh club in Europe, and confidently moved into the next qualification round. Maccabi Tel Aviv, one of Israel’s strongest clubs, will be Kairat’s next opponent.

“Before the match, of course, we had our concerns. Still 1-0 was a slippery advantage. We heard a statement [from their coach] that the Albanian team arrived pursuing only a victory. We tuned in for the match and I think that we won deservedly today. True, there were a few unused opportunities. Unfortunately, this is our problem. [Luckily] the opponents did not surprise us. In fact, we saw on the field what we expected from them. They played with the same lineup. As for the next opponent, their team is well staffed. The club’s level of play fits the Champions League better and indeed the club is fighting for a champion’s title in their country. We will be well prepared to match [anyone],” said Kairat’s veteran Ukrainian midfielder Anatoly Tymoshchuk after the game.

“First of all many thanks to our excellent fans – it is unbelievable. Thank you for something that is always with us! I am grateful to the players that did not disappoint us. We were leading 1-0 and occasionally kept losing the ball, but then we took full control of the situation,” said manager Kakhaber Tskhadadze following the final match.