Karkaraly – Town of History and Nature

By Kamila Zhumabayeva in Tourism on 18 July 2016

ASTANA – One of Kazakhstan’s oldest towns surrounded by rich nature and small wooden houses on narrow streets, Karkaraly reminds visitors of villages in Switzerland. The relaxing suburban getaway is the perfect spot to breathe fresh air at a national park, ride a bicycle down smooth slopes, stop by lakes and tour remarkable historic sites. Also known as Karkaralinsk, Karkaraly is approximately 200 hundred kilometres east from Karaganda. The name emerged from traditional type of headwear decorated with beads and lace which local women used to wear.

“A legend goes that a young woman, who fled in front of the groom she had spurned, threw her headdress off from her galloping horse. Immediately, the headdress transformed itself into a mountain chain, hiding the girl from the eyes of her pursuer hotly intent on marriage,” according to Eurasia.travel.

A caravan route of the Great Silk Road heading to Siberia once passed through Karkaraly. The region is currently developing as a resort city.

Karkaraly does not have its own airport or railway station. The nearest airport is in Karaganda with regular flights to Astana, Almaty and other destinations. The closest railway station is in the same city. Guests can either rent a taxi or take a bus from Karaganda’s bus station to Karkaraly and the latter may take about four hours.

The road going east from Karkaraly branches at Burkutty, continuing east to Ayagoz and north to Semey, notes Caravanistan.com. Public transportation does not make the trip, as neither road is the best, and taxis can be expensive.

Visitors traveling in their own cars may be able to make the trip in two and a-half to three hours. Drivers can stop by small lakes and for a meal in populated areas along the Karaganda–Ayagoz highway and a gas station is available. 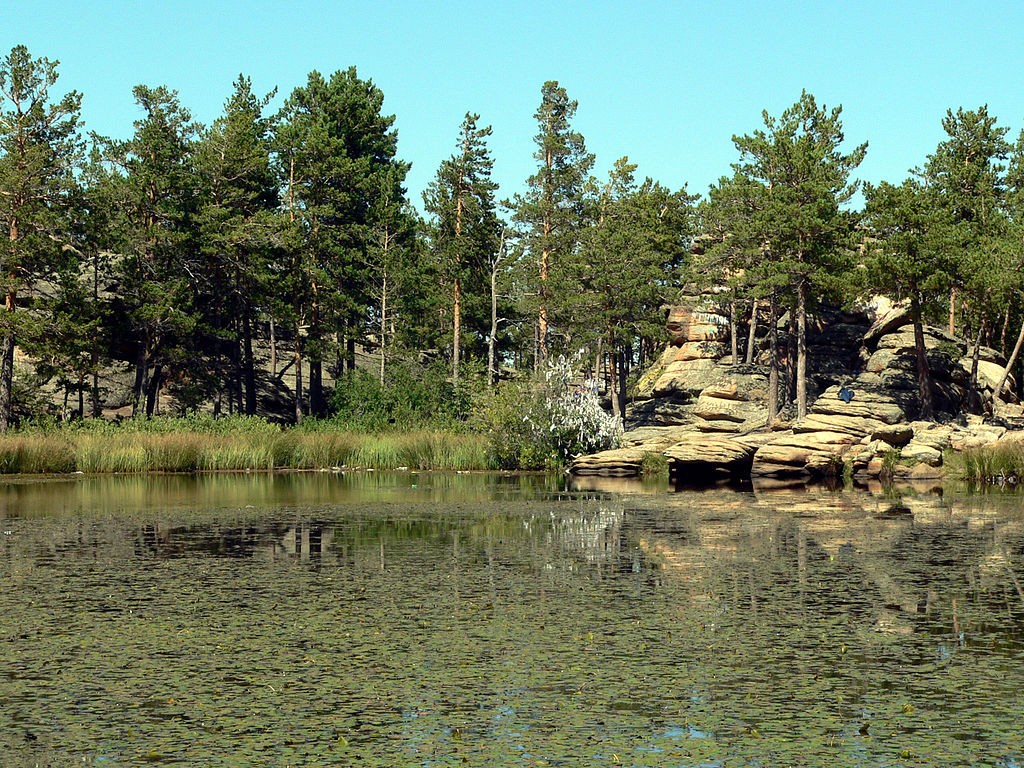 The town stands as the gateway to the Karkaralinsk Mountains, a well-maintained national park that offers opportunities for camping and watching eagles soar, according to Caravanistan.com.

For a more comfortable stay, the online guide offers the Karkaraly Ecocentre. For about 5,000 tenge (US$14.70) per person per day, tourists get a bed and three meals. The Tas Bulak Mountain Hotel is open all year round and accommodates guests with New Year arrangements.

The Kent Mountains are home to a unique, historic and cultural monument of the ancient Bronze Age city of Kent and holds the ruins of a Buddhist monastery built by the Dzungars in the mid-17th century, writes Caravanistan.com.

“Kyzyl-Kensh, also located in the Kent Mountains, is an architectural monument of the time of the Dzungar invasion of the Kazakh steppe,” notes the website. “It is located in a small valley almost completely surrounded by rocky mountains… As always with archaeology, for those without a little imagination or interest, it’s just a bunch of rocks!”

Kent was a large city of 30 hectares and approximately 1,000 people. The town was divided into streets and quarters where copper and bronze were found for metallurgists. Masters made weapons, equipment and ornaments and inhabitants were most likely skilled metallurgists.

Other Natural and Historical Attractions

Beldeutas National Park east of Karkaraly is home to many protected species, including Pallas’s cat and arkhar (mountain sheep). Zhirenshal Peak is the highest point in the reserve at 1,403 metres. Aulietas is a sacred location with strangely-shaped rock formations, according to Caravanistan.com.

The mountain lakes, due to their significant altitude, feed on snowmelt floods and underground springs. The most popular and most visited is Shaitan (Devil’s or Damned) Lake, where the water level never changes nor freezes. Beautiful Bassein (Swimming Pool) Lake is shaped like a rectangular bowl reminiscent of a pool.

The remnants of Kyzyl Kensh Palace can be seen east of Karkaraly in the Kent Mountains.

“The little town, with its old Russian houses from the second half of the 19th century, many of which are still of wood and decorated with carvings, is also worth a walk. The houses on Bokeikhan Street and the mosque on Aubakirov Street are superb,” indicates the website.

The mosque was founded in the 19th century by Sultan Kunanbai, father of Kazakh poet Abai Kunanbayev.

The Kent Mountains are not very tall, with the highest peak reaching a little over 1,400 metres above sea level. The mountains are filled with fossils and many abandoned extraction sites.