ASTANA – Serikbek Kuntugan is a professional falcon hunter. He lives and works 15 kilometres from Astana and is happy to show this national type of hunting for tourists. 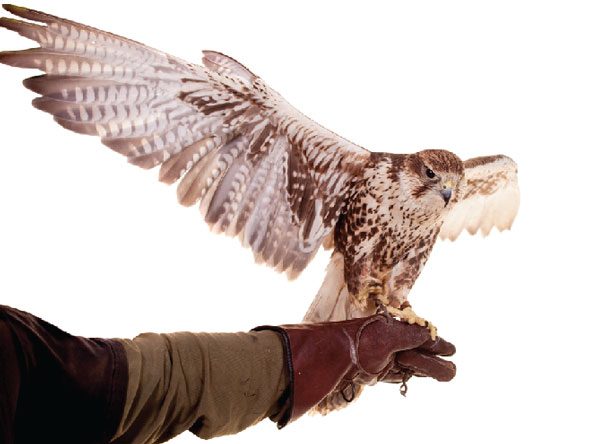 “At least two or three tourists come to me everyday. People are very interested in falcon hunting because it becomes more and more exotic even for locals,” Kuntugan said in an interview with The Astana Times.

“People from different states come to me. Especially foreigners are amazed to witness the way my falcon catches a victim. The action is very fast and you have to be very attentive to see it,” the hunter said.

“Some people really want to become falcon hunters. Usually such person is a middle aged man who wants to be closer to national traditions,” Kuntugan said.

The secrets of falcon training were kept under wraps. Falconry traditions live and were developed in modern Kazakhstan, being filled with new vital force and energy. The traditions pass from a father to a son or from a grandfather to a grandson. In ancient times, Kazakh people didn’t have women falcon hunters, but new time updates the traditions as well.

Usually tourists are accompanied by a conductor or a professional hunter who help the tourist not to miss any important moment of the hunting.

After game detection, a falcon hunter lets his falcon to fly. A few seconds later, a prompt attack and an injured victim fights in the powerful claws of the proud predatory bird.

Falconry is one of the most unique features of life in Kazakhstan. Falcon hunting starts in late September when birds are preparing for migration and lasts until the first snow falls.

Having a falcon was very prestigious since ancient times. Only wealthy people could afford it. Lucky falcon hunters with great experience were held in respect. Falcon hunting was extremely popular among Kazakh feudalistic noblemen. The noblemen and ordinary people as well used eagle hunting.

Today, there are more than 100 falcon and eagle hunters in Kazakhstan. The hunting is officially recognised as national sport. A special organisation holds annual championships, which are attended by hunters from all regions of the state.

Blackcock, partridge and duck are the most popular game for falconry. Falcon hunter Kuntugan welcomes everybody to visit him (15 kilometres from Astana) and enjoy falconry when the hunting season starts. For more information call +7 (775) 3296171.