ASTANA – Kazakhstan’s real natural resource to depend on in the future is its atmosphere of tolerance, Ambassador of the Netherlands to Kazakhstan Hans Driesser told The Astana Times in a July 7 interview. 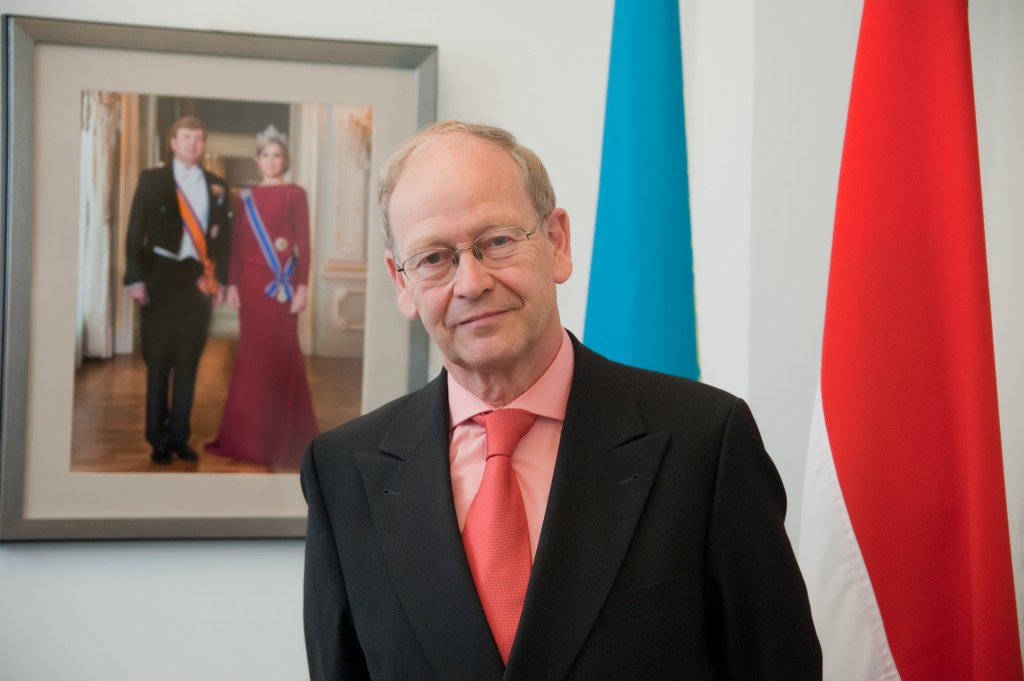 His country shares some experiences with Kazakhstan, and has achieved the same atmosphere, he said. “For centuries, our two countries have developed a culture of tolerance between different ethnic groups inside and peaceful coexistence with strong neighbouring countries outside.  This has been the most remarkable discovery for me, after three years,” said Driesser, whose mission will end in August, but who will be coming back to Kazakhstan as the Dutch commissioner for EXPO 2017.

“It opens avenues in our bilateral relationship for cooperation in the field of nuclear energy, which is already strong, but also in regional and global security, as well as development,” he noted.

In an interview with this newspaper more than two years ago, Driesser discussed the priorities for his term in Kazakhstan. One was to double the number of Dutch businesses in Kazakhstan.

“The number hasn’t been doubled for a number of reasons. There are economic challenges; the oil price is lower than it was in 2013. We have to take it into account, but we have to take a longer view on investments, the number of businesses and export. And the longer view is a rather positive one,” he said.

“First of all, it is not about the quantity of the Dutch firms here, but the quality. I see more businesses in the energy field. Kashagan [Kazakhstan’s massive but delayed oil project, in which Shell is a partner] hopefully will be on stream in fall; production will start again and that means also more bilateral businesses – supplies and consultancy. That is for the coming 20–30 years,” he noted.

The ambassador mentioned that Shell has taken over British Gas’s participation in the Karachaganak field. “That is also an enormous trigger for Dutch-Kazakh business in the long term,” he said.

Another promising field is agriculture, said Driesser. “The number of projects in that field is booming, especially greenhouses in Aktobe [and the] Almaty region and all over the country. Dutch greenhouses have come to Kazakhstan and that also means investments in the long term.”

The greenhouses also come with management and training for Kazakh farmers, which creates jobs for the local population.

Driesser also noted that through the Eurasian Economic Union, Kazakhstan now has easier access to Siberia’s market. “From the Dutch greenhouses, roses and vegetables are produced and directly exported to Siberia. That’s a fast growing market,” he added.

“There is a potential for cooperation in the field of space technology. Dutch space technology companies can offer high tech, innovative solutions for environment and water management in Kazakhstan,” said Driesser. The Kazakh-Dutch Business Council also connects the two countries, and the ambassador reported that Prime Minister of Kazakhstan Karim Massimov has been invited to the Netherlands to discuss further cooperation through the business forum.

Another priority was increasing the number of Kazakh students in Holland.

“I have visited many universities in Astana, Almaty, Atyrau, Shymkent and Kyzylorda. So I travelled around and I see a growing interest among Kazakh students to come to Europe, including the Netherlands. I hope that Kazakh students will be more often coming to the Netherlands to study agriculture. It is a very important sector containing a lot of potential for bilateral cooperation between our two countries. For example, just recently a delegation of professionals in dairy farming from Kazakhstan travelled to the Netherlands for a study tour.  I hope in future in this specific field there will be more opportunities for young Kazakh agricultural students who come to the Netherlands,” the ambassador noted.

The Netherlands has confirmed its participation in EXPO 2017 and Driesser was assigned the role of national commissioner last December.

“We have a medium-sized pavilion. Last week I met with Chairman of Astana Expo 2017 Akhmetzhan Yessimov and his team. We were both very satisfied with the results. We are in the process of deciding what will be the narrative, the storyline of our pavilion,” said Driesser. He added that the National Day of the Netherlands at EXPO 2017 is likely to be June 22 next year.

In May, Royal Dutch Airlines KLM launched flights to Astana. “It tells me KLM believes that there is a growing market for tourism to Kazakhstan and from Kazakhstan. EXPO is a trigger for having direct flights. Personally, I am happy because it is a big boost for our relationships and it is only a six-hour flight.”

The developing bicycle infrastructure of the Kazakh capital has also become a topic of conversation.

“In [the Netherlands], there are more bicycles than people. The population is 17 million people like in Kazakhstan, but I think there are more than 20 million bicycles.  Using a bicycle has three big advantages: it is good for your health, good for traffic and good for the environment,” said Driesser.

According to him, Astana is made for bicycles, since it is flat and spacious. “I’m happy to see more and more bicycles over these three years. And Samruk Kazyna [Kazakhstan’s sovereign wealth fund] started the rent-a-bike industry. It’s great, but not enough.”

“[My wife and I cycle] during the summer. We start in April when the snow is gone [and ride] until the beginning of November, every weekend. And we are using not sport bicycles, but city bicycles. … It is ideal. If I were an entrepreneur, I would sell city bicycles,” stated Driesser.

The infrastructure is improving, he said, but the main problem is sidewalk barriers. The left bank is much more adapted for bicycles than the right one.

“There’s room for improvement. It costs money but it will pay off. I know the city administration is working on that and if they want advice from the Netherlands on how to plan, how to do that, we are happy to do that. If there is anything our embassy can do to give advice, we are ready,” he offered.

“Astana will have a beautiful future [for cycling], but it needs more investments and infrastructure,” said Driesser. He also said Atyrau and Aktau can also become great places for cycling, and that Astana can become an example for the whole country.

The ambassador shared his first impressions of Kazakhstan and how they have changed.

“I had never been to Central Asia before I came here in 2013. I saw the steppe and saw Astana. I was deeply impressed with the modern city, and that [is true for] every visitor from abroad. The reputation of Astana and the reality is different. Many people think about Astana during wintertime and associate it with extremely cold weather. So many people are discovering the beauty of Kazakhstan and Astana,” he said.

He admitted that he will miss winter days in Astana, which he says surprises people. “I live near the Yessil River and it is such a beautiful sight when it is cold and there is sunshine. That’s a big secret of Astana. Many other cities in Eastern Europe are dark in winter. Astana is light.”

“Kazakh people are wonderful: nice and hospitable, as well as friendly and open. I feel it as an Ambassador and I hear many Dutch tourists and business people also saying that they enjoy the atmosphere of hospitality here.   People here are kind, nice, always interested in you, eager to learn about our country,” he noted.

“I will miss my job. It is the nicest job I have ever had. It is hard, but I have seen relations between my country and Kazakhstan growing. I am absolutely fascinated to see how this country is developing,” ended Driesser.