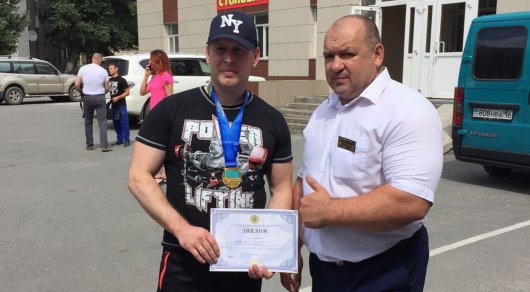 “I have positive emotions after the performance. I have been engaged in weightlifting whole my life, I was practicing for myself. But I have never participated in the competition, did not have such goal. But this time, colleagues and friends, also those who train with me took the initiative. They said that my physical readiness allows me to participate and offered to take part in the championship of Kazakhstan in the veterans category. Well, I performed and lifted 155 kilogrammes, but during trainings I could do 160,” said Garikov.

He is 41 years old and it was his first performance at the tournament of such level. In the weight category of 83 kilogrammes, he lifted 155 kilogrammes.

According to Tengrinews, the governor has another sporting achievement. During his younger days, he become absolute champion of the former Semipalatinsk region (now part of the East Kazakhstan region) in Greco-Roman wrestling.

Garikov said that with a tight timetable and demanding job, he exercises after work, sometimes until late night. And the current success in powerlifting imposes additional responsibility.

Maslikhat Deputy Andrey Altaybayev, who is also senior powerlifting coach of the East Kazakhstan region, became a champion this year and has set a new national record. Another representative of the Maslikhat, Talgat Baimurinov won in the 93 kilogrammes category and Amirzhan Akhmedzhanov was the second in 105 kilogrammes category.