ASTANA – Less than a month remains until the Summer Olympics in Rio. While not many know that rowing sports are developing in the Kazakh capital, the nation’s canoeing and kayaking athletes Zoya Ananchenko, Inna Klinova and Sergey Tokarnitsky will participate in the Games. 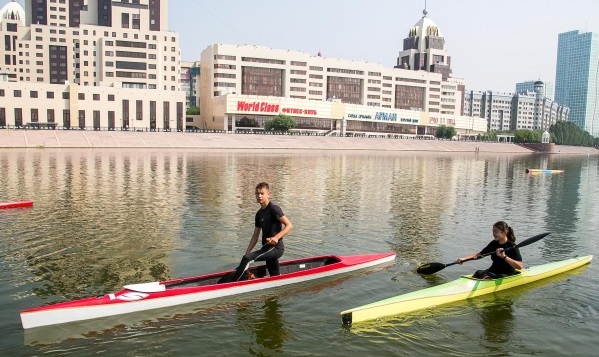 The athletes are currently in Belarus, where they are training jointly with that nation’s team, according to the akimat (city administration) press release. They will soon go to the Czech Republic and then fly to Brazil, said Specialised Advanced Athletic School senior trainer Askhat Kaliakparov.

Canoeing and kayaking are attracting more and more city residents. About 100 young athletes are presently engaged in the sports, training at Children and Youth Sports School number four. When the paddlers achieve high levels and can become members of the national team, they go to the Specialised Advanced Athletic School. Individuals must be at least 23 to join the school.

The sports began to develop in the capital in 2000, noted the press release. Children are able to enrol starting at age 10 and classes are open for boys and girls. It takes around two-three weeks to learn to stand in the canoe or kayak.

“They [children] come to us when they are toddlers and start to learn. It is very difficult to learn the basics. A certain balance is needed and the ability to keep that balance, both in the canoe and kayak. After a child has mastered that, he prepares for the first start,” said kayaking and canoeing coach Evgeny Bezhnar.

During the school year training is held five-six times a week, increasing to eight-ten times a week during the holidays. To be strong and resilient, athletes must constantly be in good physical shape and add skiing, going to the gym and running to their winter regime.

Aleksandra Kim, a 17-year old master of sports, became involved in the sport by chance. After three years of rowing the kayak, she moved to the canoe.

“My friend brought me to rowing. I started training just to maintain my health, but it turned out I became fully immersed in the sport and started to practice professionally. We recently travelled to Slovakia to international competitions and we also went to the Women’s Canoe Cup in France. Now we are preparing to go to Brest and then, according to the plan, we will prepare for the world championship in Minsk among athletes born in 1998 and later. When you are engaged in this sport, you become so confident, strong and have to have a lot of power for it. Since the women’s distance in canoeing is 200 metres, for me the main thing is to prepare for the 200 metres. My dream is to go to the Olympics,” she said, according to the press release.

Desire is not the only element that plays an important role in the professionals’ development and achievements. The input of psychologists, nutritionists, massage therapists and other professionals is vital, too. For example, each athlete has his or her own diet; the average weight for men should be between 85-95 kilogrammes.