By Aiman Turebekova in International on 25 July 2016

ASTANA – Brazil and Kazakhstan finalised July 25 a new bilateral visa-free regime for the citizens of each country. 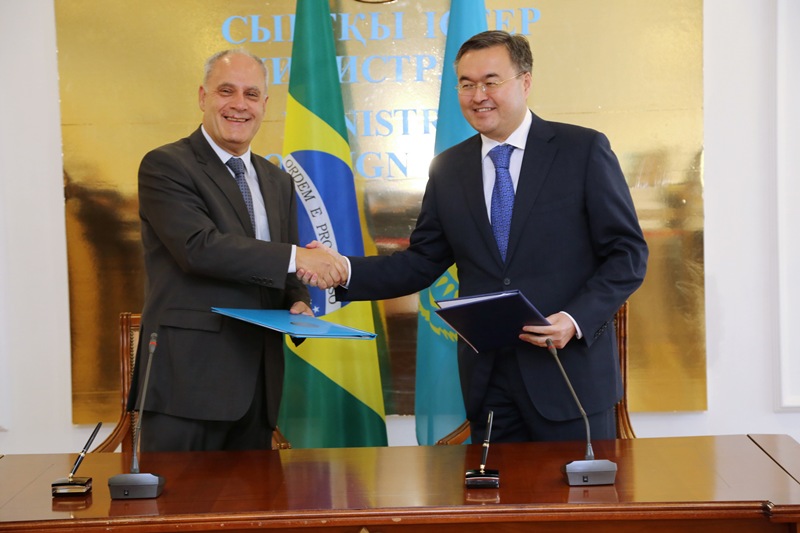 First Deputy Minister of Foreign Affairs of Kazakhstan Mukhtar Tleuberdi and Brazilian Ambassador in Kazakhstan Demetrio Bueno Carvalho signed the agreement in a July 25 ceremony at the Kazakh Foreign Ministry in Astana.

“The agreement will facilitate the participation of Kazakh athletes in the Olympics games. It will also simplify the visits of our citizens to Summer Olympics that will be held this year Aug. 5-21 in Rio de Janeiro. This agreement gives a chance to the Brazilians to see the latest achievements in the field of green economy at the upcoming international exhibition EXPO 2017,” said Tleuberdi after the signing ceremony.

“We hope that the signing of this document will contribute to the growth of trips of Kazakh tourists and representatives of business circles to Brazil,” Carvalho said. According to him, more than 2,000 of Kazakhstan’s citizens received a visa to travel to Brazil last year.  Brazil offers many options for tourist experiences, ranging from eco-tourism to various types of cultural tourism.

Besides, this agreement is aimed not only at facilitating mutual trips of citizens of both countries but also to further develop trade and economic, scientific and technical, cultural and humanitarian, tourism and other relations.

Brazil, Argentina and Chile have all agreed to participate in EXPO 2017 in Astana. APEX Brasil Trade and Investment Promotion Agency played a major role in Brazilian presentations at the three previous expos, at Shanghai 2010, Yeosu 2012 and Milan 2015. A number of Brazilian companies have shown interest in participating in the upcoming exhibition in Astana to illustrate the country’s achievements in advancing the production and use of wind, solar, geothermal, biomass and nuclear energy.