By Aiman Turebekova in Sports on 8 July 2016

ASTANA – Construction of the 12,000-seat Ice Palace, the main venue of the 2017 Winter Universiade to be held in Almaty, has been completed.

Despite trimming the budget from 32 to 17 billion tenge (US$94.7 million to 50.3 million), the venue was commissioned three months ahead of schedule. Currently, pre-commissioning activities are being conducted at the venue. According to Almaty Akim (Mayor) Bauyrzhan Baibek, the share of the state funds exceeded by 60 percent.

The Ice Palace has three sections: a large, multifunctional ice rink with seats for 12,000 spectators, designed for holding sporting events and training sessions for ice hockey, figure skating and short track as well as cultural events and mass skating for the public; a training rink plus a fitness and health complex; and a swimming pool. 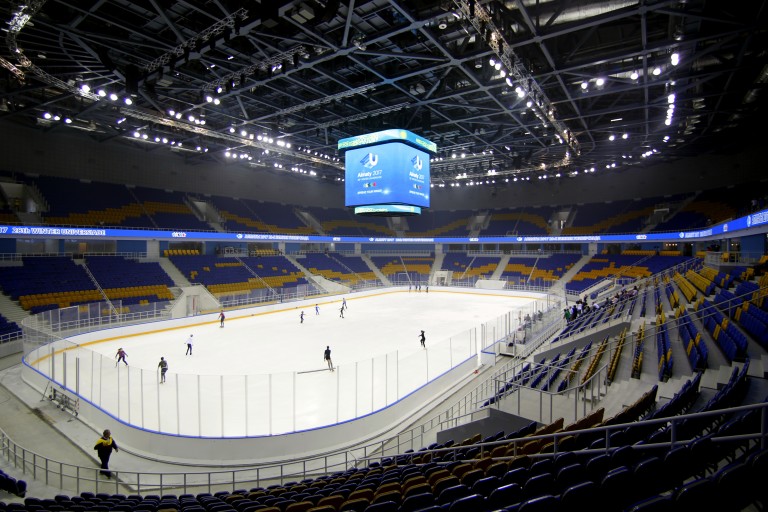 Landscaping of the venue has been completed and trees, flowers and lawns have been planted. The site next to the venue has also been improved following a unified concept for improving the city based on the national character of the country. Thus, small architectural forms, litter bins and benches have been decorated with ethnic ornamental patterns. At a February meeting about the Universiade, President of Kazakhstan Nursultan Nazarbayev emphasised that hosting such an important event has to give a new impetus to the development of the city by improving its architecture as well as hotel, restaurant and transport services. He added that venues for the competition have to be accessible to the public.

More than 2,000 athletes from approximately 60 countries will take part in the World University Games, which will be held from Jan. 29 to Feb. 8, 2017 and include 12 sport disciplines.