Zhayik – Ural Expedition Kicks Off at the National Museum

By Azamat Syzdykbayev in Nation on 9 June 2016

ASTANA – The anniversary 20th expedition devoted to the Day of Kazakhstan State Symbols kicked off recently in National Museum. Members of Assembly of the People of Kazakhstan and ethnic and cultural centres took part in the exhibition. The “Ural – the River of Friendship” photo exhibition was held as well. 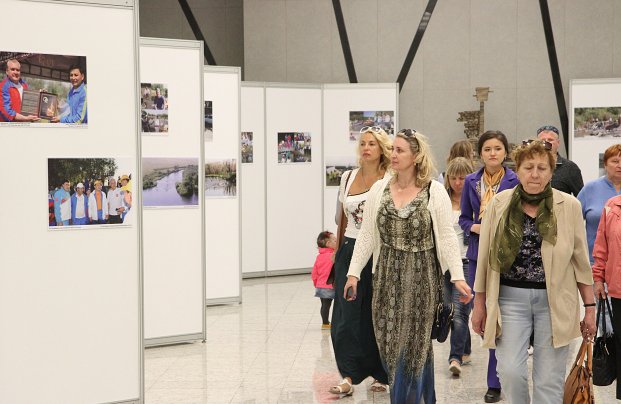 Deputy of Mazhilis (lower house of Parliament) Yelena Tarassenko is a permanent member and one of organisers of the expedition.

“We celebrate the 25th anniversary of Kazakhstan’s Independence this year. It is very symbolic that our event takes place in anticipation of the Day of Kazakhstan State Symbols. Today, we make conclusions of long-term work in the National Museum of our country. Let me congratulate all participants of the expedition and all our associates and teammates. We are happy people, because we live on our land, set a high value on our wealth and preserve our region. We are the patriots of our states. This is the 20th expedition and the event was established by the Kazakhstan side. Our idea was supported by our neighbours from friendly Russian Orenburg. We have cooperated for 15 years,” she said.

Deputy Chairperson of the Assembly of the People of Kazakhstan Yeraly Tugzhanov emphasised that such noble work can be done only by people with pure hearts.

“Today, the Russian delegation headed by Vice Governor of Orenburg region Pavel Samsonov arrived. Such great expedition is organised in cooperation with Russian side for 20 years. This expedition has not only historical, but even more cultural meaning. It aims at cleaning of the Ural River,” Tugzhanov said.

The first expedition started in 1997 and in 2001 it became an international one. Deputies of the Mazhilis, representatives of political parties, legislative and executive power, experts and scientists, historians and archaeologists took part in the event.