By Malika Orazgaliyeva in People on 25 June 2016

ASTANA – Director of the Miloserdie (“Mercy”) Volunteer Society, social activist, actress, producer and TV presenter Aruzhan Sain, 40, is one the most famous and successful women in Kazakhstan. Sain wasn’t chosen for TV for her connections, but through her own hard work and determination, she says. 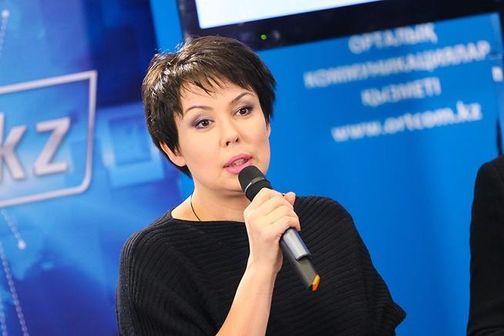 “I was six years old when I was sent to ballet. Instead of watching TV and relaxing with girlfriends, my mom took me to a ballet class taught by Honoured Artist and amazing teacher Natalia Vikentieva. Ballet teaches you everything: how to forget about children’s games, to sweat your guts out, to fall and to rise, to learn to live with bloody calluses. It teaches you to overcome. … Thanks to these lessons all things become possible. Now my children do ballet as well, and we explain to them that it is more than dance,” Sain said in an interview with Kazpravda.kz.

As a child, Sain spoke only Russian, but in fifth grade, she asked her parents to send her to a Kazakh school. “Thanks to the love and patience of the teachers, I managed to quite quickly deal with the adaptation period. In grades nine to 11, I defended the school’s honour in city competitions. I took third place in mathematics, first in geography. When it came time to go to a national competition I chose geography, because my parents – physicists and mathematicians themselves – insisted,” she said.

In Sain’s words, after school, she wanted to enroll in a theatre institute, but her father forbade it. Since she had twice won national geography contests, Sain was able to enroll in the geographical faculty of KazGU (Kazakhstan State University), where the faculty of ecology and monitoring had just opened, without taking entrance exams. She graduated from KazGU, but never practiced her academic profession.

“Actually, I worked all the time. I earned my first money at age 13, selling newspapers. At age 15, I was a choreographer in the National House of Culture,” she said.

Answering a question about how she became a TV presenter, Sain said that everything began with “Razminka” (“Warm-up”), the first such TV programme in Kazakhstan.

“People say that it is necessary to have influential relatives and profitable connections to be a TV star; actually, I am evidence that this is not the case. It is impossible to deceive viewers. You might be on TV 24 hours a day, but if you are not sincere, people will not remember and recognise you,” she said.

As Sain explained, the year of her graduation from school, she won a part in a commercial that called for a graduating student. There she met a girl, Zamira, who would become her business partner.

When Aruzhan and Zamira went to the 31st TV channel with their project, TV producers accepted it and started to broadcast. In 1994, they created a production centre, Aruzhan and Co.

“That is how ‘Razminka’ started 23 years ago. Perhaps there is no older Kazakh programme than this. It is both a reason for pride and a reminder of our age: we are almost contemporaries of independence. I think that for many people, ‘Razminka’ is a sign of stability: if the morning starts with it, then everything is well in the country. Many of our viewers are 30 or even 40 years old. However, my favourite viewers are children. Sometimes, people who meet me in the street say that their children stop crying when they hear the sounds of ‘Razminka,’” she said.

“Children are an audience you cannot deceive with clothes, words, views, smiles, the way this can sometimes be done with adults. If they stop watching you, then you need to finish everything and get involved in other things,” Sain added.

In April 2006, Sain founded a charity fund through the Save Children’s Lives campaign. Her charity raises money to treat children who suffer from diseases that are incurable in Kazakhstan and provides assistance to orphanages and child care centres.

The main objective of the fund is to be a communication link between those who want to help and those who need help. People can help with money, services, volunteer activities or professional knowledge, according to the official website of the foundation.

Sain has been given the Altyn Zhurek (“Golden Heart”) award.