PM Massimov Comments on Use of National Fund

ASTANA – Member of the Finance and Budget Committee of Mazhilis Yekaterina Nikitinskaya asked Prime Minister Karim Massimov about the National Fund’s savings during a June 17 joint session of the Parliament and members of the government. 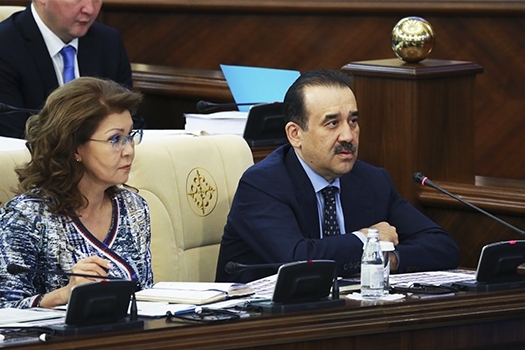 According to the prime minister, the budget expenditures due to the high state presense in the Kazakh economy immediately affect the development of business activity and increase economic growth.

Nikitinskaya noted the conclusions of an audit committee indicate that over the past five years in the structure of the national budget income tax revenues, a substitution of transfers from the National Fund and lower budgets can be traced.

“If in 2011, transfers accounted for 29.8 percent of revenues, in 2015, their share increased by 13 percent to almost 43 percent. What measures is the government planning to take to change this negative practice? Have we wasted the National Fund and how long will the savings of the National Fund last at the present level of consumption in the current financing of the budget deficit?” she asked.

“This is a question for both the international and internal auditors. We understand it, and together with those questions, which I mentioned like the public sector reforms, the taxes and the more efficient use of public funds, this system will also have the question related to the efficiency of the national fund,” the Prime Minister of Kazakhstan noted.

According to him, President Nursultan Nazarbayev will receive the relevant law this coming fall.

“We are discussing it, this summer we will submit for consideration by the head of state and in autumn will come to you along with the budget in order to be clear and well understood,” he stressed.