By Malika Orazgaliyeva in People on 2 June 2016

ASTANA – Commander of an Airbus 320 and Chief Aviation Inspector for the Committee of Civil Aviation of the Kazakh Ministry of Investment and Development Toty Amirova is doing her bit to erase the gender divide in the air – and everywhere else. 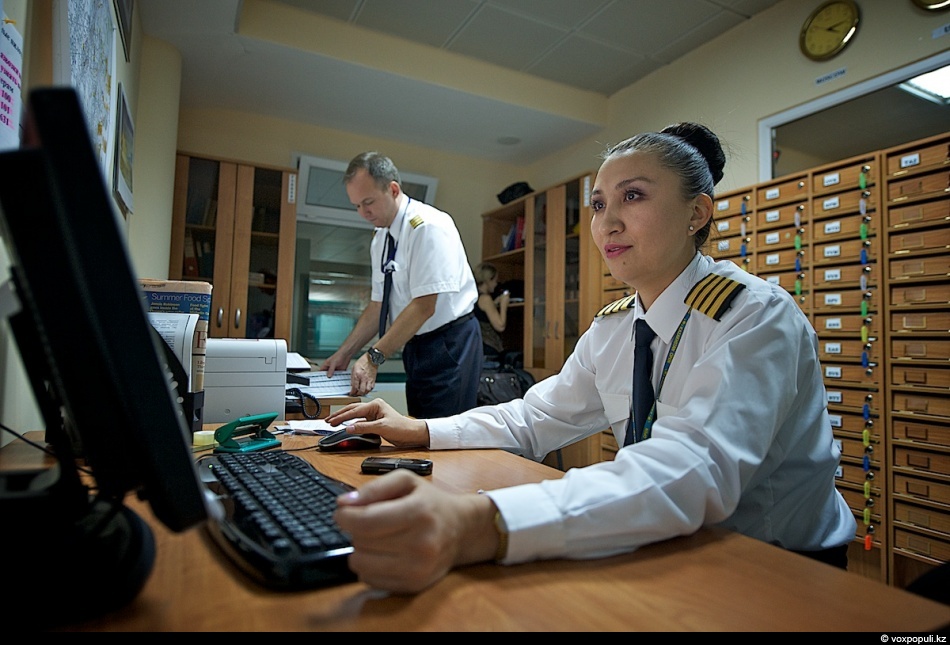 There are only a few women working as co-pilots in Kazakhstan’s flagship carrier Air Astana, though in neighbouring Russia some women are already Boeing commanders. According to Amirova, it takes time to become an aircraft commander. It is necessary to fly a certain number of hours and prove that you are a leader able to make the right decisions.

“In this profession, respect is earned only by your own actions. One mistake can lead to irreparable consequences. Many girls coming to the air force also want to resolve their family issues, get married, give birth to a child. I understand them: love for one’s profession is praiseworthy, but for women there is nothing more important than motherhood. For this reason, it is important to consider that in our physically hard work, your health can be compromised at any time,” Amirova said.

According to Amirova, a woman can become a commander of a large aircraft if she has always had good health and great endurance. Good grades in the sciences are also important. Amirova was accepted into the University of Aviation on her first attempt, and finds working on a male team perfectly ordinary. She is sure that public opinion will change. Amirova believes in dreaming and hopes people will continue to dream of becoming a pilot, even if their odds seem slim.

Today’s male and female youth choose aviation not only because of the romance, the pilot believes. The profession is relatively well paid, although this was not always the case: in the 1990s, when Amirova began to fly, there were no wages; in fact, pilots had to train at their own expense.

“Others wishing to become pilots are deceived by external success. They think that society will respect them and bow. However, popularity, money and power are temporary concepts. For me, a successful person is someone who has overcome professional difficulties, physical illnesses, painful suffering and social stereotypes while pursuing their professional career. All of this reveals the best sides of someone’s personality. This capital will remain with you forever,” Amirova said.

The pilot said that Kazakhstan’s aviation has improved since the 1990s and 2000s, but that things could be developing faster. In her words, in order to maintain the economic security of the country, Kazakhstan’s airlines should have their own aircraft. Big air companies with government participation work on new but leased aircraft, while small private air companies fly old aircraft.

Having studied aeronautical engineering and economy, Amirova said, “If our country purchased 50 aircraft from any large company, it would be equal to the construction of 50 factories. It is very difficult to invest in factories, because it is hard to calculate how much money is needed in the construction process. However, if you buy a plane, the amount of money spent is clear immediately. Therefore, very often aircraft are called ‘flying factories,’” she said.

On the topic of the latest plane crashes, Amirova said she thinks they are related to the now-commonplace exploitation of pilots by air companies. In her words, management does not realise how difficult pilots’ work is and assigns them flight after flight.

“Big air companies take into account that pilots need to have a rest after a flight; therefore, they have fewer plane crashes – unless, of course, you are speaking of a terrorist attack. When a person does not sleep two nights in a row, his attention decreases by half. It is understandable that the abilities of the human body are limited. A pilot can endure thirst and hunger, but he cannot overcome sleepiness. He may not understand at what point he fell asleep at the wheel,” explained Amirova.

Currently, Amirova flies several times a month, mostly on Saturdays and Sundays, in order to maintain her qualification. She notes that during the time she has been working on the Committee for Civil Aviation, Kazakhstan was withdrawn from the black list of the International Civil Aviation Organisation (ICAO), which had blocked it from opening new flights to Europe.