ASTANA – The international conference, Religions against Terrorism, was held May 31 in the capital’s Palace of Peace and Harmony, one day before the 15th session of the Secretariat of the Congress of the Leaders of World and Traditional Religions. 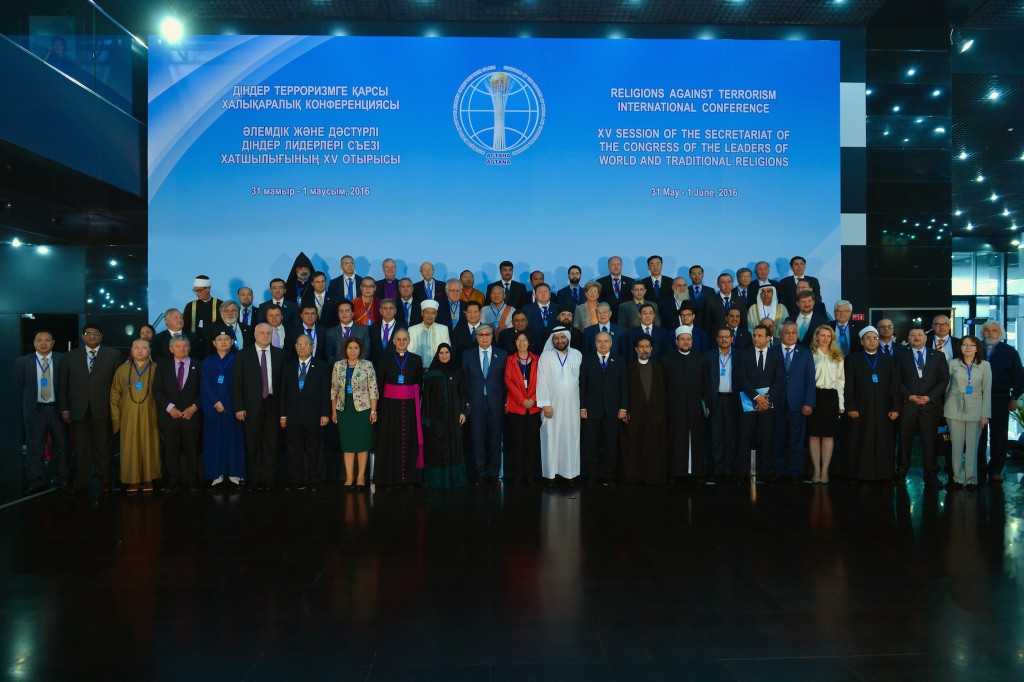 The event was convened at Kazakh President Nursultan Nazarbayev’s initiative, which was first voiced at the United Nations General Assembly in September. More than 60 international delegations came to the city to participate in the conference.

“The threat of terrorism has fundamentally changed the notion of international security. Terrorism knows no boundaries, does not make any distinction between rich and poor countries. There is no exact and comprehensive solution to this problem yet. Therefore, we need to step up joint efforts to seek an effective response to this global threat. It is of crucial importance for politicians, religious leaders, opinion leaders and media to align efforts to root out the ideological basis of terrorism by means of raising awareness,” noted Nazarbayev’s message read by Kassym-Jomart Tokayev, Chairman of the Kazakh Senate and Head of the Secretariat of the Congress.

The President added the conference is encouraging dialogue between political and religious leaders and the fact that it is taking place in Astana is particularly important since Kazakhstan, home to more than 100 ethnic groups, is committed to the principle of “unity based on diversity.”

“Terrorism seeks to undermine international law, principles and mechanisms of cooperation between states and their commitments to human rights and freedoms. Better consolidation of the human civilisation can be the only response to this menace. Our societies, and first of all mass media, should establish and spread out ethical norms to prevent any incitement to religious hatred,” the message said. 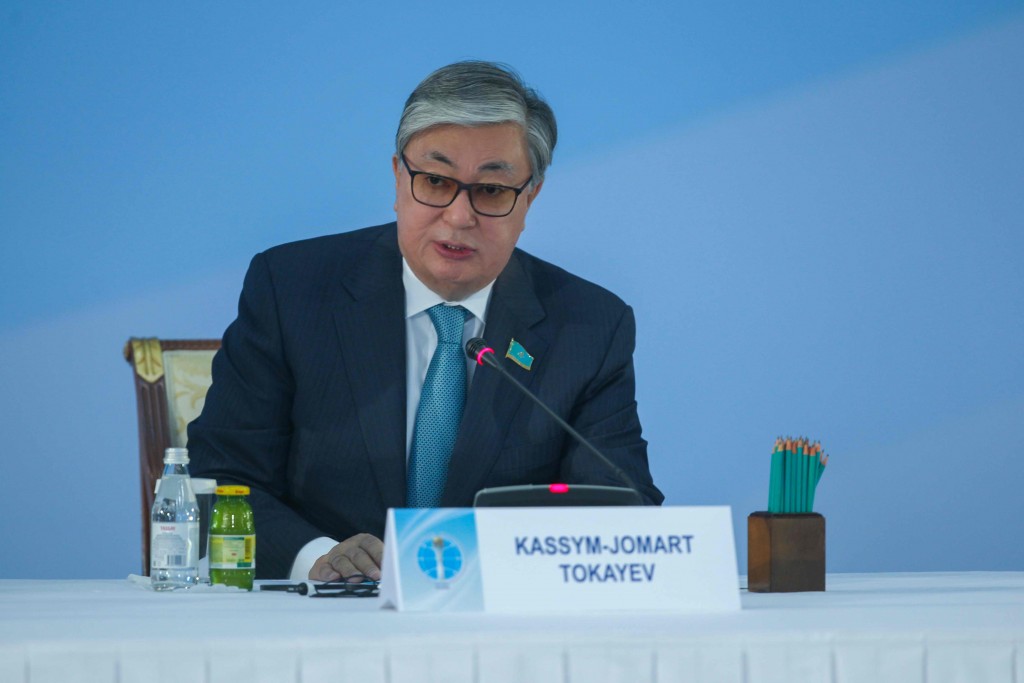 “In broader terms it is essential to eliminate extreme poverty, hunger and epidemics to which we have committed ourselves in the 2030 Agenda for Sustainable Development. We also should solve military conflicts, which serve as a breeding ground for terrorism. Education and enlightenment are crucial. These two pillars are yet to be improved so that the young people are aware of the evil nature of terrorism,” said Tokayev in his opening speech

He also mentioned Nazarbayev’s Manifesto “The World. The 21st Century,” in which the head of state warns about the erosion of international law and cooperation.

“It concerns national counter-terrorism policies that should be based on the central and coordinating role of the United Nations in global affairs. We need to realise that terrorism must be countered not only by individual countries or their groups, but by the entire world community,” said Tokayev. 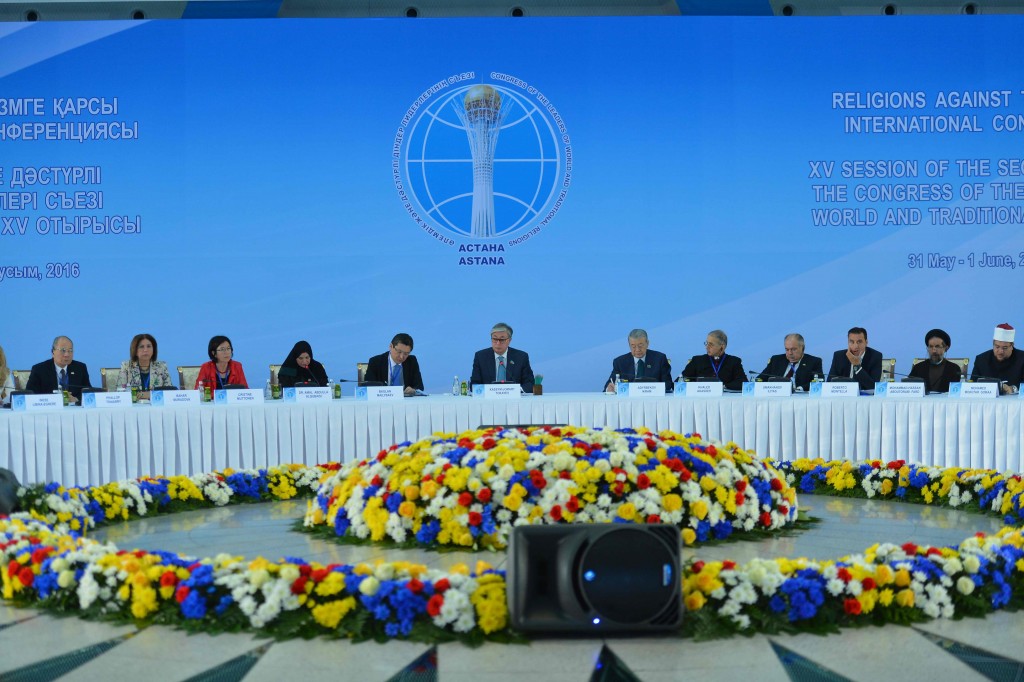 “Religious leaders and parliamentarians, being prominent and powerful representatives of their people, should be extensively involved in counter-extremism activities including prevention measures, crisis management and the reconstruction of societies that suffered from terrorism and extremism,” he said.

Tokayev urged everyone to take a common position condemning actions of anti-religious extremists offending the feelings of believers.

“Consequently, another task facing us is to separate freedom of speech from blasphemy. This is a complex task that requires continued attention, dialogue and cooperation, which our conference stands for,” he said.

“Terrorism should not change us or change the values we live by. We cannot trade security for dignity and we should not allow terrorists to change our beliefs and values. Let us through that timely and important conference develop a set of declarations that are comprehensive and actionable and let us pledge to follow up on these recommendations by creating appropriate follow-up mechanisms,” she said.

Alqubaisi added terrorism is “a symptom of serious disease” which has many faces, such as poverty, ignorance and intolerance. Tending to those issues is essential in fighting terrorism, whileeducation and economic development also play a vital role in countering it.

Organisation for Security and Co-operation in Europe (OSCE) Parliamentary Assembly Vice President and Special Representative for Central and Eastern Asia Christine Muttonen noted “diversity is not an obstacle for peace and stability.”

“On the contrary, we can find many proofs that diversity can be an invulnerable promoter for development, wealth, content and rich cultural expression,” she said.

She noted the important role of inter-parliamentary diplomacy, promoting tolerance and understanding between religions and supporting interfaith cooperation.

“Only together can we fight this. Diversity and respect for multi-confessionality are not only cornerstones for our history and identities, but also preconditions for peace, stability and growing prosperity within the OSCE region. Terrorism is a crime that has no justification,” said Muttonen. 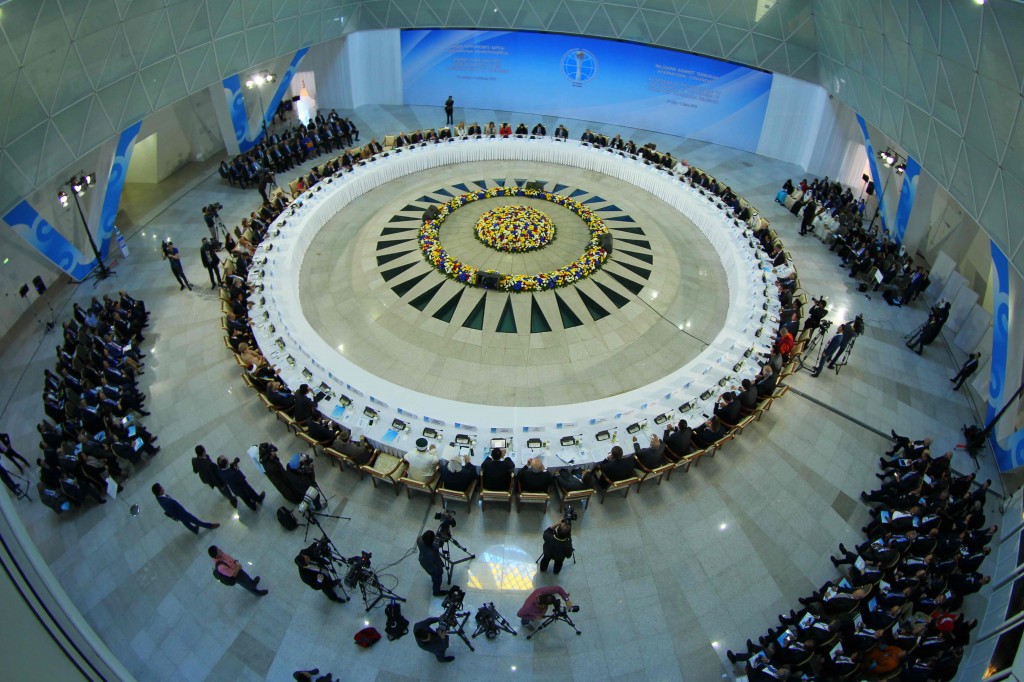 Axel Fischer, a member of the German Bundestag and Vice President of the Parliamentary Assembly of the Council of Europe, spoke about promoting diversity in the state and its role in countering terrorism.

“In Kazakhstan’s 2050 Strategy of President Nursultan Nazarbayev I received lots of good ideas for successful ways, especially in the part about a good basis for success of multi-ethnical and multi-confessional society,” he said.

Fischer also mentioned the significance of the President’s initiative to create a global anti-terrorism coalition and its role in promoting understanding between countries.

Parliamentarians from different countries, representatives of Islam, Christianity, Judaism, Buddhism, Taoism and Hinduism and members of international organisations had an opportunity to speak on the agenda and express their proposals on resolving the issue. At the end of the day, the 28-point conference statement was read aloud by Roberto Montella, secretary-general of the OSCE Parliamentary Assembly.

The document indicated conference participants “underline the importance of adopting a UN General Assembly resolution banning defamation of religions and their symbols and emphasising the principles of tolerance, peaceful coexistence and interfaith dialogue.”

The role of women and families in countering terrorism was stressed as well, especially concerning education of youth, who raise concerns in becoming more exposed to extremist ideology.

“We emphasise the importance of good religious education and the need for specialised training of religious leaders in order to effectively confront the spread of terrorist and extremist ideologies,” noted one of the points. 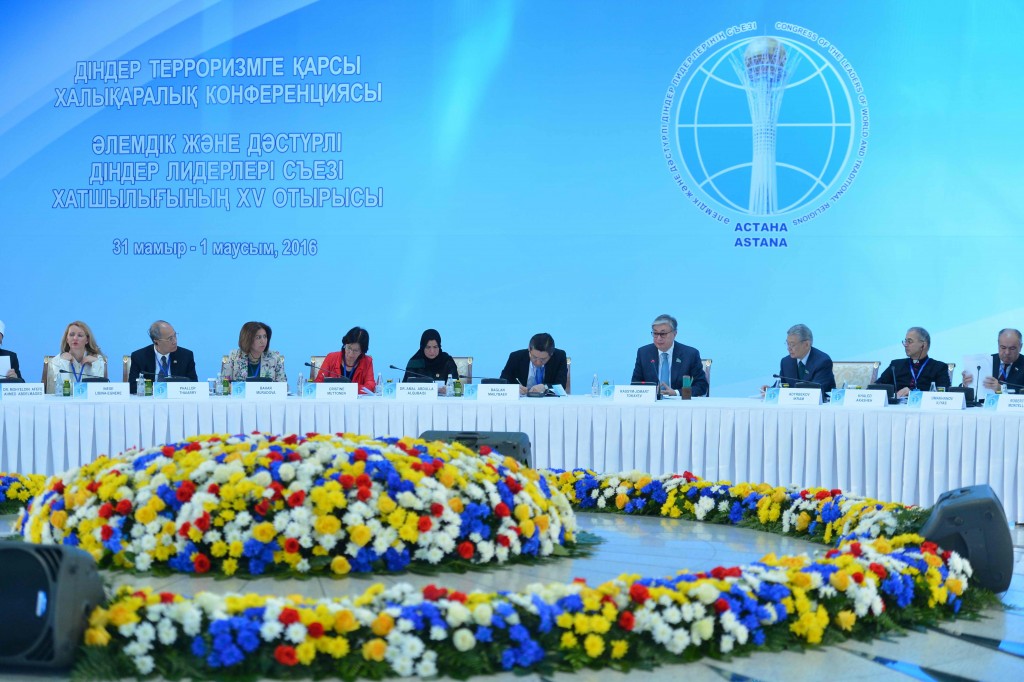 The participants welcomed UN Security Council Resolutions 2250 and 1325, which “emphasise the importance of the participation of women and youth in decision-making at different political levels.”

As many speakers talked about the issue, the statement stressed the need for efforts “to eliminate the root causes of terrorism, including poverty, hunger, unemployment, instability and conflicts.”

Those involved in the conference supported further promotion of the UN Global Counter-Terrorist Strategy and welcomed the outcome of the UN high-level dialogue “Religions for Peace,” initiated by Kazakhstan and held May 6 in New York. They also backed Nazarbayev’s proposal to establish a global anti-terrorist coalition under UN auspices and adopt a comprehensive UN document on countering terrorism.

“We urge the international community to support President of Kazakhstan Nursultan Nazarbayev’s manifesto ‘The World. The 21st Century,’ which proposes a global strategy of concerted and responsible actions by countries to eliminate the virus of wars and conflicts,” noted the document.

“We call on the international community to follow the example of Kazakhstan, which renounced the fourth largest nuclear arsenal and closed the Semipalatinsk Nuclear Test Site 25 years ago, which set an example in building a secure future for the whole planet,” the statement also read.

“We note the special role of the Congress of the Leaders of World and Traditional Religions, which has become an effective platform for global inter-religious dialogue. We urge the whole international community to join efforts to counter terrorism and underline the need to continue the constructive dialogue among parliamentarians and religious leaders,” read Montella to end the statement.