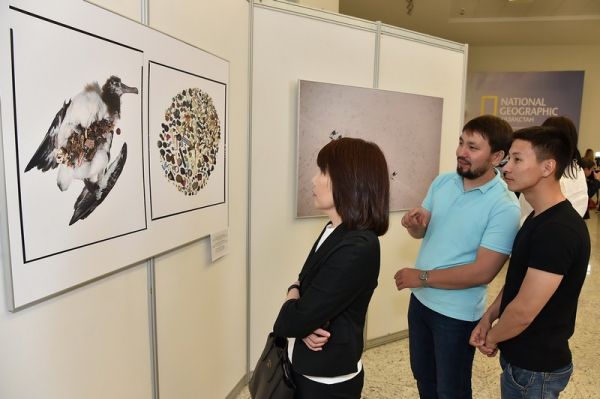 The exhibition features some of the most amazing pictures that have been created during the 128-year history of the publication. These included the famous Afghan girl by Steve McCurry, Michael Nichols’ iconic Jane Goodall, Thomas Abercrombie’s unique view of Mecca and other well known photo compositions. The visitors could also discover interesting historic facts behind the exhibited pictures, which usually remain behind the scenes, as well as see other versions of the scenes, which were taken before the best shot was finally made.

The official opening ceremony was attended by the Minister of Information and Communications of Kazakhstan Dauren Abayev, who in his speech stressed the significance of the fact that a well-known magazine is now publishing in the Kazakh language.

“I believe our diverse natural landscapes, spreading from Altai Mountains to the Caspian Sea, rich history and unique traditions will offer a wide range of interesting topics for future stories,” said Abayev.

The event was also attended by Fazila Zhanaltay –a photo of her was published in the National Geographic magazine in 1954.

The National Geographic Magazine is distributed in 38 languages in more than 80 countries. Main topics of the publication embrace the fields of history, geography, archeology, science and culture. The magazine promotes careful attitude toward the planet and the necessity of preserving its unique beauty.

The first issue in Kazakh was presented in February with four published this year.