ASTANA – From the hydrogen bomb to anthrax, anything that could threaten the peaceful co-existence of humanity, was discussed June 20 at the international conference devoted to the Manifest “The World. The 21st Century.” Leading experts on nuclear safety, supported by the International Science and Technology Centre (ISTC), met in the Library of the First President. 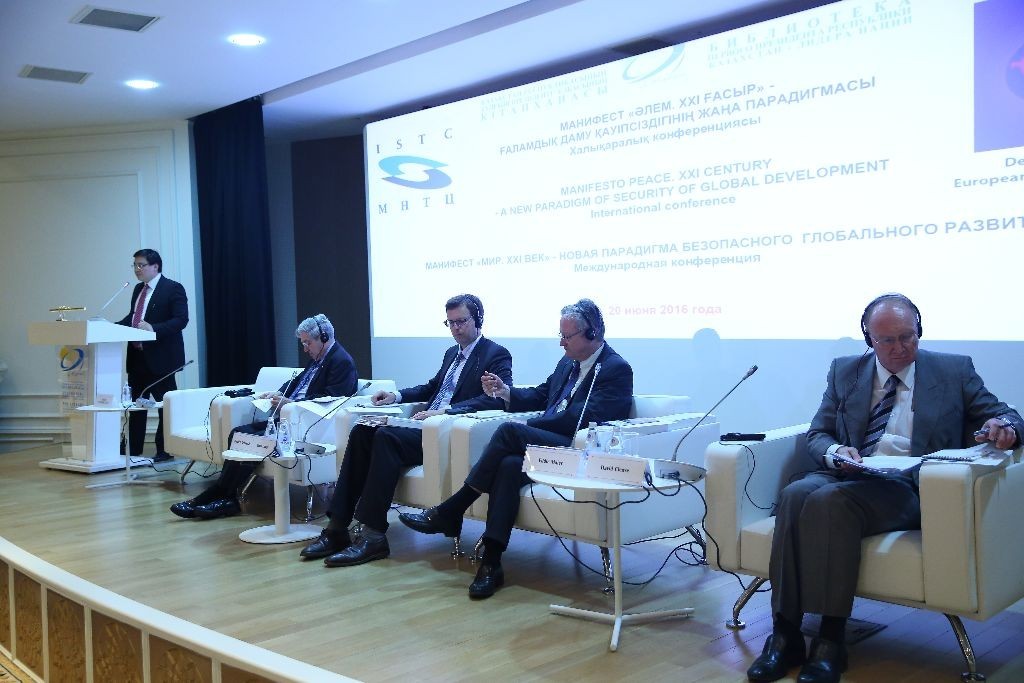 “The most prominent scientists are now working on solving the problems of planetary scale. First of all, it is preventing the use of a nuclear arsenal in modern conflicts. Kazakhstan has a wide experience in matters of nuclear disarmament and for us it is very valuable,” said U.S. Deputy Assistant Secretary of State for Non-Proliferation of Weapons Programmes in the Bureau of International Security and Non-proliferation Simon Limazh.

Countries which have nuclear weapons usually save them to secure a more important place in the international arena, said European Union (EU) delegation in Kazakhstan Charge d’Affaires Kamen Velichkov. Kazakhstan abolished the fourth largest nuclear arsenal, however, and became an effective state with creative foreign policy, he said.

The nation is an important strategic partner for the EU, said the EU’s representative on the ISTC governing board Eddie Mayer. He noted Kazakhstan’s favourable political and geographical location and its open and accessible position to the world’s leading scientists.

Kazakhstan occupies first place among the world’s uranium exporters and makes a great contribution to strengthening the non-proliferation of nuclear weapons. “The World. The 21st Century” highlights the importance of expanding and replicating existing nuclear-weapon-free zones and the need to modernise existing international disarmament treaties. The document emphasises how a world without conflict will require the removal of the injustice that is its root cause. It shows all barriers to fair trade and development must be lifted, while the principles of international law need to be reaffirmed and respected by all countries.

The ISTC was established by the EU, Japan, Russia and the U.S. in 1992. Kazakhstan joined three years later and the headquarters are now situated in the capital’s Nazarbayev University. Scientists at the centre are working on security in chemical, biological, radiological and nuclear fields, as well as energy efficiency and nanotechnologies. Special attention has been paid to the scientific and technical support of seismic monitoring projects and prediction of seismic activity in ISTC member states.

The ISTC finances and builds business links between scientists in Armenia, Georgia, Kazakhstan, Kyrgyzstan and Tajikistan and their colleagues and research organisations in the EU, South Korea, Japan, Norwayand the U.S. The centre has already funded 2,753 projects worth more than $1 billion; specifically in Kazakhstan, 210 research projects valued in excess of $80 million. ISTC-supported projects were used at Fukushima in Japan.